The Thynnidae (also known as thynnid wasps or flower wasps) are a family of large, solitary wasps whose larvae are almost universally parasitoids of various beetle larvae, especially those in the superfamily Scarabaeoidea. Until recently, the constituents of this family were classified in the family Tiphiidae, but multiple studies have independently confirmed that thynnids are a separate lineage. [1] [2] [3]

Most species are small, but they can be up to 30 mm long. The females of some subfamilies (all Diamminae, Methochinae, and Thynninae) are wingless, and hunt ground-dwelling (fossorial) beetle larvae, or (in one species) mole crickets. The prey is paralysed with the female's sting, and an egg is laid on it so the wasp larva has a ready supply of food. In species where both sexes are winged, males are similar in size to the females, but are much more slender. The males of species with wingless females, however, are often much larger than the females and have wings; the adults mate in the air, with the female carried by the male's genitalia. Adults feed on nectar, and are minor pollinators. As some of the ground-dwelling scarab species attacked by thynnids are pests, some of these wasps are considered beneficial as biological control agents. [ citation needed ]

The family has five subfamilies, which were previously placed in Tiphiidae before it was found to be non-monophyletic. [1]

Wasps of the genus Sphex are cosmopolitan predators that sting and paralyze prey insects. Sphex is one of many genera in the old digger wasp family Sphecidae, though most apart from the Sphecinae have now been moved to the family Crabronidae. There are over 130 known Sphex species.

Tiger beetles are a large group of beetles, known for their aggressive predatory habits and running speed. The fastest known species of tiger beetle, Rivacindela hudsoni, can run at a speed of 9 km/h, or about 125 body lengths per second. As of 2005, about 2,600 species and subspecies were known, with the richest diversity in the Oriental (Indo-Malayan) region, followed by the Neotropics. While historically considered as a subfamily of ground beetles (Carabidae) under the name Cicindelinae, recent genomic studies indicate that they should be considered a distinct family, the Cicindelidae, as the sister group to Carabidae within the Adephaga. 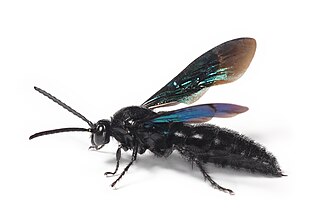 The Scoliidae, the scoliid wasps, are a family of about 560 species found worldwide. They tend to be black, often marked with yellow or orange, and their wing tips are distinctively corrugated. Males are more slender and elongated than females, with significantly longer antennae, but the sexual dimorphism is not as apparent as in the Tiphiidae. 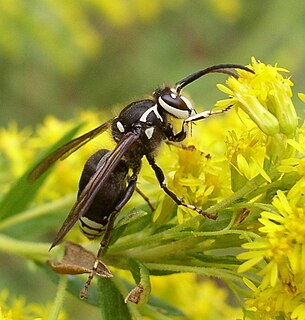 Vespoidea is a superfamily of wasps in the order Hymenoptera, although older taxonomic schemes may vary in this categorization, particularly in whether to recognize the superfamilies Scolioidea or Formicoidea. Vespoidea includes wasps with a large variety of lifestyles: eusocial, social, and solitary habits, predators, scavengers, parasitoids, and some herbivores.

The Tiphiidae are a family of large, solitary wasps whose larvae are parasitoids of various beetle larvae, especially those in the superfamily Scarabaeoidea. Until recently, this family contained several additional subfamilies, but multiple studies have independently confirmed that these comprise a separate lineage, and are now classified in the family Thynnidae.

Pison is a cosmopolitan genus of wasps within the family Crabronidae. The genus comprises 145 described species, although many species, especially in South America remain undescribed.

The Gasteruptiidae are one of the more distinctive families among the apocritan wasps, with surprisingly little variation in appearance for a group that contains around 500 species in two subfamilies and with 6 genera worldwide. They are members of Evanioidea.

Larra, also known as mole cricket wasps or mole cricket hunters, is a genus of wasps that prey on various species of mole crickets. They have gained prominence as integrated pest management agents. 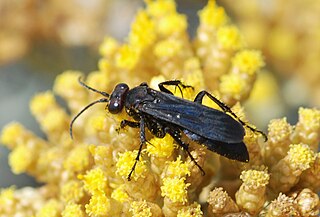 Agenioideus is a genus of spider wasps from the subfamily Pompilinae; the genus occurs in Europe, where 21 species are recorded, eastwards to Japan, in North America, South America, and Australia.

Cyphononyx is a genus of spider hunting wasps in the family Pompilidae.

Hemipepsis is a genus of large pepsine spider wasps found throughout the tropics. They are commonly known as tarantula hawks. Hemipepsis wasps are morphologically similar to the related genera Pepsis and Entypus, but distinguishable by the pattern of wing venation. In South Africa 18 plant species from three plant families, the Apocynaceae, Orchidaceae, and Asparagaceae subfamily Scilloideae are pollinated exclusively by Hemipepsis wasps.

Brachycistidinae is a subfamily of the flower wasp family Tiphiidae that contains 10 genera and 85 species, and which is confined to the Nearctic zoogeographic region. 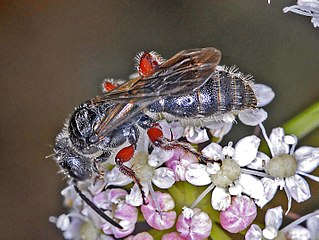 Tiphiinae is one of the two subfamilies of the flower wasp family Tiphiidae, the other being the Nearctic Brachycistidinae. It is the larger of the two and has a worldwide distribution.

Stizoides is a genus of kleptoparasitic sand wasps in the family Crabronidae. There are at least 30 described species in Stizoides.

Myzinum is a genus of wasps in the family Thynnidae. There are 63 species presently recognized in Myzinum.

Methocha is a genus of parasitoid wasps in the family Thynnidae.

Thynnus is a genus of wasps in the family Thynnidae.