Using Argon–argon dating, Wang and colleagues in 2005 dated part of the Tiaojishan Formation to about 160 million years ago, the beginning of the Oxfordian stage, the first stage of the Upper Jurassic epoch. [2] In 2006, a study by Liu and colleagues used U-Pb zircon dating to conclude that the Tiaojishan Formation correlates with the Daohugou Beds, and the complete chronological range of this shared biota dates to between 168 and 164/152 Ma ago. [3] A subsequent study, published in 2008, refined the age range of the formation further, finding that the lower boundary of the Tiaojishan was formed 165 Ma ago, and the upper boundary somewhere between 156 and 153 Ma ago. [4]

Based on the plant life present in the Tiaojishan Formation, Wang Yongdong and colleagues determined that the climate in Liaoning during the mid Jurassic would have been subtropical to temperate, warm and humid. [1]

Beautifully preserved fossils of dinosaurs, pterosaurs, salamanders, insects, arachnids [5] and other invertebrates, conifers, ginkgoes, cycads, horsetails, and ferns, and even the earliest known gliding mammal ( Volaticotherium ) have been discovered in these rocks.The tuffaceous composition of some rock layers show that this was a volcanic area, occasionally experiencing heavy ashfalls from eruptions. The landscape then was dominated by mountain streams and deep lakes surrounded by forests of gymnosperm trees. [6]

An indeterminate aeshnoid (insect) species is known from Liaoning. [28]

Cycad-like plants, the most abundant plant group in the formation. 27 species in 11 genera.

Leptosporangiate ferns, represented by 17 species in 8 genera, are the second most abundant plant type in the formation.

Jeholopterus was a small anurognathid pterosaur from the Middle to Late Jurassic Daohugou Beds of the Tiaojishan Formation of Inner Mongolia, China, preserved with hair-like pycnofibres and skin remains. 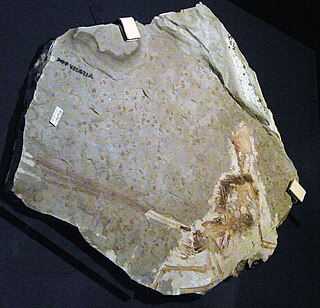 Scansoriopterygidae is an extinct family of climbing and gliding maniraptoran dinosaurs. Scansoriopterygids are known from five well-preserved fossils, representing four species, unearthed in the Tiaojishan Formation fossil beds of Liaoning and Hebei, China.

Castorocauda is an extinct, semi-aquatic, superficially otter-like genus of docodont mammaliaforms with one species, C. lutrasimilis. It is part of the Yanliao Biota, found in the Daohugou Beds of Inner Mongolia, China dating to the Middle to Late Jurassic. It was part of an explosive Middle Jurassic radiation of Mammaliaformes moving into diverse habitats and niches. Its discovery in 2006, along with the discovery of other unusual mammaliaforms, disproves the previous hypothesis of Mammaliaformes remaining evolutionarily stagnant until the extinction of the non-avian dinosaurs.

Volaticotherium antiquum is an extinct, gliding, insectivorous mammal that lived in Asia during the Jurassic period, around 164 mya. It is the only member of the genus Volaticotherium. 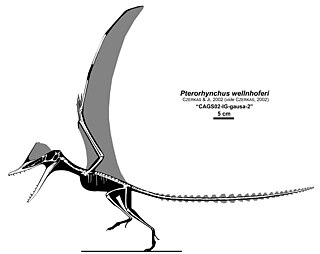 Pterorhynchus is an extinct genus of pterosaur from the mid-Jurassic aged Daohugou Formation of Inner Mongolia, China. 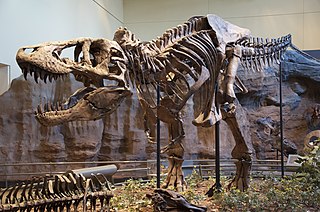 The Jehol Biota includes all the living organisms – the ecosystem – of northeastern China between 133 and 120 million years ago. This is the Lower Cretaceous ecosystem which left fossils in the Yixian Formation and Jiufotang Formation. These deposits are composed of layers of tephra and sediment. It is also believed to have left fossils in the Sinuiju series of North Korea. The ecosystem in the Lower Cretaceous was dominated by wetlands and numerous lakes. Rainfall was seasonal, alternating between semiarid and mesic conditions. The climate was temperate. The Jehol ecosystem was interrupted periodically by ash eruptions from volcanoes to the west. The word "Jehol" is a historical transcription of the former Rehe Province.

The Tuchengzi Formation is a geological formation in China whose strata span the Tithonian to Berriasian ages. Dinosaur fossils, particularly footprints, have been found from the formation.

The Yixian Formation is a geological formation in Jinzhou, Liaoning, People's Republic of China, that spans about 1.6 million years during the early Cretaceous period. It is known for its fossils, listed below.

Wukongopterus is a genus of basal pterosaur, found in Liaoning, China, from the Daohugou Beds, of the Middle or Late Jurassic. It was unusual for having both an elongate neck and a long tail.

The Haifanggou Formation, also known as the Jiulongshan Formation, is a fossil-bearing rock deposit located near Daohugou village of Ningcheng County, in Inner Mongolia, northeastern China.

Kunpengopterus is a genus of wukongopterid pterosaur from the middle-late Jurassic Tiaojishan Formation of northeastern China. The genus contains two species, the type species K. sinensis and K. antipollicatus.

Archaeoistiodactylus is an extinct genus of wukongopterid pterosaur from the Middle Jurassic of China.

Chuanqilong is a monospecific genus of basal ankylosaurid dinosaur from the Liaoning Province, China that lived during the Early Cretaceous in what is now the Jiufotang Formation. The type and only species, Chuanqilong chaoyangensis, is known from a nearly complete skeleton with a skull of a juvenile individual. It was described in 2014 by Fenglu Han, Wenjie Zheng, Dongyu Hu, Xing Xu, and Paul M. Barrett. Chuanqilong shows many similarities with Liaoningosaurus and may represent a later ontogenetic stage of the taxon.

Daohugoupterus is a genus of pterosaur from the Middle to Late Jurassic Daohugou Beds of the Tiaojishan Formation in Inner Mongolia, China.

Douzhanopterus is an extinct genus of monofenestratan pterosaur from the Late Jurassic of Liaoning, China. It contains a single species, D. zhengi, named by Wang et al. in 2017. In many respects, it represents a transitional form between basal pterosaurs and the more specialized pterodactyloids; for instance, its tail is intermediate in length, still being about twice the length of the femur but relatively shorter compared to that of the more basal Wukongopteridae. Other intermediate traits include the relative lengths of the neck vertebrae and the retention of two, albeit reduced, phalanx bones in the fifth digit of the foot. Phylogenetically, Douzhanopterus is nested between the wukongopterids and a juvenile pterosaur specimen from Germany known as the "Painten pro-pterodactyloid", which is similar to Douzhanopterus in many respects but approaches pterodactyloids more closely elsewhere.

Vilevolodon is an extinct, monotypic genus of volant, arboreal euharamiyids from the Oxfordian age of the Late Jurassic of China. The type species is Vilevolodon diplomylos. The genus name Vilevolodon references its gliding capabilities, Vilevol, while don is a common suffix for mammalian taxon titles. The species name diplomylos refers to the dual mortar-and-pestle occlusion of upper and lower molars observed in the holotype; diplo, mylos.