Uburu Ekwe is an autonomous community in Ekwe Community in Isu Local Government Area of Imo State, Nigeria. It comprises four main villages and several kindreds and clans. The villages that make up Uburu Ekwe are Umuduruehie, Umuokwara, Eziekwe and Odicheku. The headquarters of Uburu Ekwe is located at Eziekwe.

Ekwe is a rural community in Isu Local Government Area of Imo State, Nigeria. It is made up three politically autonomous communities. The three autonomous communities are Ekwe-Nwe-Orie, Ebenator Ekwe and Uburu Ekwe. The name Ekwe originated from the name of the Great Grand Ancestor called Ekwe whose father Nnamike Onuoma founded Ekwe.

Isu is a local government area in the Imo State of Nigeria. Its headquarters are in the town of Umundugba. Other communities are Amandugba, Ekwe, Uburu Ekwe, Isunjaba, Amurie Omanze, Ebenator Ekwe and Oboro Amurie. The name comes from the Isu people, a subgroup of the Igbo people. 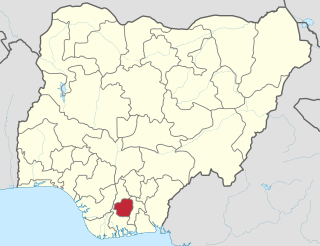 Imo is one of the 36 states of Nigeria and is in the south east region of Nigeria. Owerri is its capital and among the largest cities in the state. Its other major cities are Orlu, Oguta, Mbaise and Okigwe. Located in the south-eastern region of Nigeria, it occupies the area between the lower River Niger and the upper and middle Imo River.

Uburu Ekwe is located in the northern part of Ekwe in southern part of Isu Local Government Area of Imo State. Uburu Ekwe is bounded to the East by Isu Njaba, to the South by Ekwe Nwe Orie, to the West by Ebenator and to the North by Okwudor.

Apollos Okwuchi Nwauwa is a Nigerian-born historian and professor of Africana Studies. He is currently the Director of Africana Studies, College of Arts and Sciences, Bowling Green State University, Bowling Green, Ohio. Nwauwa earned his Bachelor of Arts (B.A.) degree from the then Bendel State University Ekpoma, Edo State, Nigeria. He received his M.A. and Ph.D. in History at Dalhousie University, Halifax, Nova Scotia Canada, in 1989 and 1993 respectively. Nwauwa is a members of many learned societies and served as President of the Igbo Studies Association from 2010-2014. He is the current editor of OFO: Journal of Transatlantic Studies. Nwauwa is author and editor of many book and scholarly journal articles.

Ebonyi State is in southeastern Nigeria. It is inhabited and populated primarily by the Igbo. Its capital and largest city is Abakaliki. Other major towns include Afikpo, Unwana, Onueke, Edda, Onicha, etc. It was one of the six states created in 1996 by the then federal military government of General Sani Abacha. The State of Ebonyi was created from parts of both Enugu State and Abia State, which in turn were initially constituents of the old Anambra and Imo States respectively. It has three senatorial zones, thirteen local government areas as well as local development centres created by the state government. It is home to six Higher institutions of learning: Ebonyi State University, Abakaliki (EBSU); Federal University Ndufu Alike Ikwo (FUNAI); Akanu Ibiam Federal Polytechnic, Unwana; Savannah Institute of Technology, Ishieke Junction, Abakaliki; Federal College of Agriculture, Ishiagu; Ebonyi State College of Education Ikwo (EBSCOEI) and College of Health Sciences, Ezzamgbo.

Naze is a town in southeastern Nigeria, 408 km south of Abuja, the country's capital. It is located in the Owerri North local government area of Imo State.

Umunoha is a town in southeastern Nigeria, located near the city of Owerri. The town usually, that is not always, is claimed to have been founded by a common ancestor, as we saw, usually larger-than-life, who begat several children to whom he allocated areas on which to settle. These areas eventually evolved to become villages. A typical example of such a claim is the tradition of origin of Umunoha autonomous community in Mbaitoli Local Government Area (LGA) of Imo State, Nigeria. Today, Umunoha is one of the autonomous communities in the LGA. It is a typical Igbo town. It is bounded on the north by Eziama Obiato and Afara communities; on the south and southwest by Ogbaku and Ejemekwuru communities; and on the south and southeast by Ifakala and Afara communities. It is served by the great East-West Road-the Port-Harcourt-Lagos Highway. It is about thirteen kilometers from Owerri, the Imo State capital. It is a small, compact but thickly populated community with a projected 1997 population of twenty-five thousand people.

Abba is a town in Nwangele Local Government Area (LGA) in Imo State, Nigeria. The traditional ruler of Abba is HRH Sir Eze Emmanuel Madukwem Unaka. Abba consists of four communities. Listed in order of seniority they are Umuokpara, Umudurunna, Ekiti-Afor, and Ogwuaga, which all consist of twenty-eight villages.

Umundugba is a town in Isu Local Government Area of Imo State, Nigeria, and is the headquarters of Isu LGA.

Isuikwuato is a local government area in Abia State in southeastern Nigeria. The name Isu-Ikwu-Ato translates from Igbo as 'three Isu families or lineage' and refers to the three lineages descended from the Isu people, in what is now a local government area. The three brothers are Imenyi which was Considered the Eldest, Oguduasaa the second eldest and their younger sibling Isuamawo, these three major clans which also harbours some various communities in each of them makes up the present day Isuikwuato.It has an estimated population of over 50,000 people. Isuikwuato has natural resources such as iron ore and kaolin. Oil lines flow through Isuikwuato and there have been cases of burst pipe which have had severe effects on the local economy and environment. The major cash crops are palm oil and cassava. The soil at Isuikwuato is loose and suffers from Erosion and this left some dangerous erosion sites in the area. They lack the needed government backing to build drainages around the area to guide the flow of water without further harming the already crying soil. Blessed with hills and highlands, the town will appreciate water infrastructures because water is an important but hard resource to get in Isuikwuato. Isuikwuato is also home to Abia State University Uturu.

Ideato North is a Local Government Area in Imo State, Nigeria. It was created in 1976 as Ideato Local Government, but was later divided into Ideato North, and Ideato South Villages belonging to the community of Arondizuogu are located in this area.

Onicha is a Local Government Area of Ebonyi State, Nigeria. It has an area of 476 km2 and has a population of 236,828 according to the 2006 census. The postal code of the area is 491. Its headquarters are in the town of Isu. However, there are a number of towns and villages in the Southeastern part of Nigeria that go by that name "ISU". But this ISU, originally made up of Agbabor, Amanator, Isu Achara, Mgbaneze, Ezekporoke, Anike,Mgbana Ukwu, Obeagu, Umuniko among others was in Ohaozara Local Government Area Council until the creation of Onicha Area Council. Onicha Igbo-Eze is a town in Onicha Local Government Area from which the name of the area council is derived. Other major towns in the Area Council aside Isu the headquarters and Onicha Igbo-Eze are Oshiri, Ukawu and Aba-Omege. Despite their original names being identical, Onicha should not be confused with the major city of Onitsha located to its west in Nigeria.

The Isu people are a subgroup of the Igbo people of southeast Nigeria. In the pre-colonial era, the Igbo people were protected from external invasion by the dense forests of the region, which also had the effect of encouraging diversity. Thus as warriors the neighboring Owerri people looked down on the Isu people, who were traders.

Amandugba is a town in the Isu Local Government Area in Imo State, Nigeria.