Wesfarmers Limited is an Australian conglomerate, headquartered in Perth, Western Australia. It has interests predominantly in Australian and New Zealand, operating in retail, chemical, fertiliser, industrial and safety products. With revenue of A$30.8 billion in the 2020 financial year, [1] it is one of Australia's largest companies by revenue. Wesfarmers is also one of the largest private employers in Australia, with approximately 107,000 employees. [1]

Wesfarmers was founded in 1914 as a co-operative to provide services and merchandise to Western Australian farmers. It was listed on the Australian Securities Exchange in 1984 and grew into a major retail conglomerate.

Westralian Farmers Co‐operative Limited was formed in 1914 as a cooperative company by the Farmers' and Settlers' Association of Western Australia, to acquire the assets of the West Australian Producers' Union, to be focused on the provision of services and merchandise to the Western Australian rural community. [2] [3] By 1919, more than 65 local co-operative companies were acting as agents for Westralian Farmers Limited. [4]

In 1924, it established the first public radio station in Western Australia with 6WF, before it passed into the hands of the Australian Broadcasting Commission in 1929, now called ABC Radio Perth

By the 1940s, the company's business included "being wheat and general merchants; country distribution for Commonwealth Oil Refineries; wool, livestock, skin and produce auctioneers; grain & fruit exporters; insurance underwriters; acquiring agents for the wheat pool of W.A." Known as Westralian Farmers Limited, it had premises in various locations within the Perth central business district. In the 1940s there were premises at 563-571 Wellington Street. It also had premises in Newman Street in Fremantle.

In 1949, Wesfarmers acquired Ashburton Transport, which at the time was lossmaking. The following year it also acquired its major competitor Gascoyne Trading, combining the operations of the two companies to supply the northwest of Western Australia. Along with wool and mail, it carted bananas from Carnarvon to Perth, returning with stores and mail from Perth. Gascoyne Trading introduced refrigerated transport to the region and three trailer road trains that now carry loads up to 115 tonnes. [5] [6] [7]

In 1984, Westralian Farmers Co-operative Limited formed Wesfarmers Limited, restructuring from a co-operative to a public company and listed on the Australian Securities Exchange on 15 November 1984. Initially the Co-operative retained 60% of the ordinary shares, guaranteeing that the co-op's farmer members retained control, and the rest was distributed to its members. [8]

In 1991, 19 m³ of the records of Westralian Farmers Co-operative were deposited with the J S Battye Library in Perth.

Bought in January 1993 the integration of Dalgety Farmers with Wesfarmers proved more difficult than expected. For a time the merged rural agency and merchandise business was Wesfarmers Dalgety until renamed Wesfarmers Landmark in March 2001 after IAMA Limited was brought in. Landmark, Wesfarmers foundation business, was sold to AWB Limited (originally the Australia Wheat Board) in August 2003. [9]

An initial investment in 10 percent of Bunnings in February 1987 reached full ownership in January 1994. Bunnings bought UK retailer Homebase in February 2016 and Britain's first Bunnings store opened twelve months later in February 2017. [9] They were 265 well-located stores and Wesfarmers believed Bunnings' management would greatly improve their modest profits. The plan was to make changes gently but tactics changed and local management, perceived as under-performing, was removed and replaced by expatriate management. The expatriate management's changes alienated the existing customer base and, aided by a poor retailing climate, brought a rapid decline into losses. A strategic review by Wesfarmers resulted in the May 2018 sale of the Homebase business to Hilco Capital at a loss of (Australian) $1.96 billion. [10]

Australian Railroad Group begun in a joint venture with Genesee & Wyoming by the purchase of Westrail at the beginning of 2000. It was sold in 2006 to Babcock & Brown and Queensland Rail. [9]

In 2001, Wesfarmers become a freely-traded publicly listed company with open ownership. [8] After becoming a public company, Wesfarmers diversified its interests by acquiring other businesses.

This division is made up of Bunnings Warehouse, a retailer of home improvement and outdoor living products, servicing home and commercial customers in Australia and New Zealand, and Officeworks, a retailer and supplier of office products for home, business and education in Australia. There are 210 Bunnings "warehouse" (larger) stores, 67 Bunnings small-format stores, 36 Bunnings Trade centres and 150 Officeworks stores. Bunnings employs more than 33,000 staff and Officeworks employs more than 6,000 staff. [11]

In January 2016, Home Retail Group accepted an offer from Wesfarmers to acquire the British home improvement retailer and garden centre Homebase. Stores in the United Kingdom and Ireland began to be rebranded as Bunnings following the takeover. [12] However, following Wesfarmer's sale of Homebase to Hilco in May 2018, [13] it was reported that the 24 stores already converted would return to the "Homebase" branding. [13]

In February 2016, Wesfarmers announced a restructure of its department store businesses into a single division named Department Stores, with each brand (Kmart and Target) continuing to operate independently. [14] The division was later renamed Kmart Group, and expanded to incorporate online retailer Catch.

Kmart is a discount department store retailer in Australia and New Zealand. Kmart has more than 200 stores around Australia and New Zealand, employing more than 31,000 staff. [11] Kmart Tyre and Auto is no longer a part of Kmart after parent Wesfarmers sold the auto division to German company Continental AG. [15] Kmart Tyre and Auto has since been rebranded by Continental AG to MyCar.

Target is a mid-level department store retailer in Australia. Target employs more than 24,000 staff. [11] In 2014, Wesfarmers was forced to write-down the value of Target by $680 million because of a fall in the company's profits. [16] Target Australia has no connection to the American retailer Target of similar name.

Wesfarmers has a 50% interest in investment house Gresham Partners plus interests in Gresham Private Equity Funds, 50% interest in Wespine, a plantation softwood sawmill in Dardanup and a 24% interest in BWP Trust which mainly owns Bunnings Warehouses tenanted by Bunnings Group Limited. [11]

On 2 July 2007, Wesfarmers announced it was purchasing the Coles Group retail business for $22 billion making it the largest successful take-over in Australian corporate history. Wesfarmers took control of Coles on 23 November 2007, after paying almost $20 billion for the company. Wesfarmers had already purchased 13 per cent of the retailer in April. [22] [23]

Wesfarmers Resources owned and operated open-cut coal producing resources in Australia including the Curragh in Queensland. Wesfarmers divested its coal business, completing the process with the sale of its 40 per cent interest in the Bengalla Joint Venture to New Hope Corporation for $860 million on 3 December 2018. [28]

In 1950 Wesfarmers purchased the Gascoyne Trading Company (GTC), growing it to become the largest transport operator in Western Australia. [29] [30] Until 1971 it held the sole rights for direct road transport between Carnarvon and Perth. [31] In 1973 a joint venture was formed with Downard to enter the interstate freight forwarding market between Western Australia and Victoria. [32] 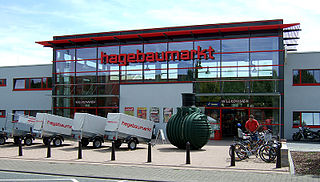 Flybuys is an Australian customer loyalty program equally owned by the Coles Group and Wesfarmers through joint venture Loyalty Pacific. Members can accrue points by shopping at Coles Group brands, certain Wesfarmers brands, and some third-party partners like HCF Insurance and Optus. Points can then be redeemed for money off purchases at Coles Supermarkets, Kmart, and Target stores, as well as vacations and household goods.

Homebase is a British home improvement retailer and garden centre with stores across the United Kingdom and Republic of Ireland. Founded by Sainsbury's and GB-Inno-BM in 1979, the company was owned by Home Retail Group from October 2006, until it was sold to the Australian conglomerate Wesfarmers in January 2016.

Hardwarehouse was a home improvement chain in Australia. The chain was an offshoot of BBC Hardware, which was owned by Burns Philp and then Howard Smith Limited, and had stores in Australia and New Zealand. It was established by BBC Hardware as a way to implement and develop the adopted hardware warehouse concept which was based on overseas chains B&Q and Home Depot.

Habitat, is a brand of household furnishings in the United Kingdom and the main homewares brand within the Sainsbury's group.

Target Australia, formerly Lindsay's and later Lindsay's Target, is a mid-price department store chain owned by the Kmart Group, part of Australian retail conglomerate Wesfarmers. Target stocks clothing, cosmetics, homewares, electronics and books, and sells them through brick-and-mortar stores and Target Online. The company's head office is located in a purpose-built building in Williams Landing, Melbourne that opened in 2018.

Home Retail Group plc was a home and general merchandise retailer based in the United Kingdom. It was the parent company of Argos and Habitat, and once owned the do it yourself chain Homebase before selling it to the Australian retailer Wesfarmers in February 2016. Home Retail Group was listed on the London Stock Exchange, until it was acquired by the British supermarket company Sainsbury's for £1.4 billion on 2 September 2016.

Bi-Lo was an Australian supermarket chain owned by Wesfarmers. Once a chain of 180 outlets, Bi-Lo stores were progressively re-branded as Coles Supermarkets from 2006, or closed. On 30th of June 2017, the final store in Loganholme, Queensland closed.

Iluka Resources is an Australian-based resources company, specialising in mineral sands exploration, project development, operations and marketing. Iluka is the largest producer of zircon and titanium dioxide-derived rutile and synthetic rutile globally. Iluka mines heavy mineral sands and separates the concentrate into its individual mineral constituents rutile, ilmenite, and zircon. Some of the ilmenite is then processed into synthetic rutile.

Richard James Barr Goyder AO is an Australian businessman and sporting administrator who is the current chairman of the AFL Commission, the governing body of Australian Rules Football. He was previously CEO and managing director of Wesfarmers from 2005 to 2017. In October 2018, he became the new chairman of Qantas, replacing Leigh Clifford.

Fremantle Woolstores were at least four large buildings on the southern side of Fremantle Harbour, in Fremantle, Western Australia.

John Bennison AM OBE was an Australian businessman known for his long involvement with Wesfarmers Limited. He began work at the company in 1954, and as managing director from 1974 to 1984 oversaw its transition from a farmers' cooperative to a publicly listed industrial conglomerate.

CSBP Limited is an Australian fertiliser and chemical company based in Kwinana, Western Australia. It is a subsidiary of WesCEF, which in turn is part of the industrials division of the Wesfarmers conglomerate.

Gascoyne Trading Company (GTC) was a transport company in Western Australia. It was established in 1924 by Keith Anderson and Charles Kingsford-Smith in Carnarvon. One of its early contracts was the mail run through the Gascoyne to Meekatharra. It expanded to serve industries between Perth and the Pilbara.