Ars subtilior (Latin for 'subtler art') is a musical style characterized by rhythmic and notational complexity, centered on Paris, Avignon in southern France, and also in northern Spain at the end of the fourteenth century. [1] The style also is found in the French Cypriot repertory. Often the term is used in contrast with ars nova, which applies to the musical style of the preceding period from about 1310 to about 1370; though some scholars prefer to consider ars subtilior a subcategory of the earlier style. Primary sources for ars subtilior are the Chantilly Codex, the Modena Codex (Mod A M 5.24), and the Turin Manuscript (Torino J.II.9).

Musically, the productions of the ars subtilior are highly refined, complex, and difficult to sing, and probably were produced, sung, and enjoyed by a small audience of specialists and connoisseurs. Musicologist Richard Hoppin suggests the superlative ars subtilissima, saying, "not until the twentieth century did music again reach the most subtle refinements and rhythmic complexities of the manneristic style." [1] They are almost exclusively secular songs, and have as their subject matter love, war, chivalry, and stories from classical antiquity. There are even some songs written in praise of public figures (for example Antipope Clement VII). Daniel Albright [2] compares avant-garde and modernist music of the 20th century's "emphasis on generating music through technical experiment" to the precedent set by the ars subtilior movement's "autonomous delight in extending the kingdom of sound." He cites Baude Cordier's perpetual canon Tout par compas (All by compass am I composed), notated on a circular staff.

Albright contrasts this motivation with "expressive urgency" and "obedience to rules of craft" and, indeed, "ars subtilior" was coined by musicologist Ursula Günther in 1960 to avoid the negative connotations of the terms manneristic style and mannered notation. [3] [ failed verification ] (Günther's coinage was based on references in Tractatus de diversis figuris, attributed to Philippus de Caserta, to composers moving to a style "post modum subtiliorem comparantes" and developing an "artem magis subtiliter".) [4] [ failed verification ]

One of the centers of activity of the style was Avignon at the end of the Babylonian Captivity of the Papacy and during the Great Schism (1378–1417), the time during which the Western Church had a pope both in Rome and in Avignon. The town on the Rhône had developed into an active cultural center, and produced the most significant surviving body of secular song of the late fourteenth century.[ citation needed ]

The style spread into northern Spain and as far as Cyprus (which was a French cultural outpost at the time). [5] French, Flemish, Spanish and Italian composers used the style.[ citation needed ]

Manuscripts of works in the ars subtilior occasionally were themselves in unusual and expressive shapes, as a form of eye music. As well as Baude Cordier's circular canon and the heart-shaped score shown above, Jacob Senleches's La Harpe de melodie is written in the shape of a harp.

The main composers of the ars subtilior (those from whom at least three compositions in this style are known) are Anthonello de Caserta, Johannes Cuvelier, Egidius, Galiot, Matteo da Perugia, Philipoctus de Caserta, Jacob Senleches, and Trebor. [6] Other composers associated with the style include: 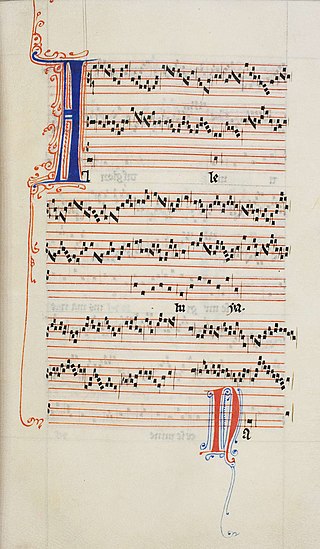 Ars antiqua, also called ars veterum or ars vetus, is a term used by modern scholars to refer to the Medieval music of Europe during the High Middle Ages, between approximately 1170 and 1310. This covers the period of the Notre-Dame school of polyphony, and the subsequent years which saw the early development of the motet, a highly varied choral musical composition. Usually the term ars antiqua is restricted to sacred (church) or polyphonic music, excluding the secular (non-religious) monophonic songs of the troubadours, and trouvères. Although colloquially the term ars antiqua is used more loosely to mean all European music of the 13th century, and from slightly before.

Ars nova refers to a musical style which flourished in the Kingdom of France and its surroundings during the Late Middle Ages. More particularly, it refers to the period between the preparation of the Roman de Fauvel (1310s) and the death of composer Guillaume de Machaut in 1377. The term is sometimes used more generally to refer to all European polyphonic music of the fourteenth century. For instance, the term "Italian ars nova" is sometimes used to denote the music of Francesco Landini and his compatriots, although Trecento music is the more common term for the contemporary 14th-century music in Italy. The "ars" in "ars nova" can be read as "technique", or "style". The term was first used in two musical treatises, titled Ars novae musicae by Johannes de Muris, and a collection of writings attributed to Philippe de Vitry often simply called "Ars nova" today. Musicologist Johannes Wolf first applied to the term as description of an entire era in 1904. 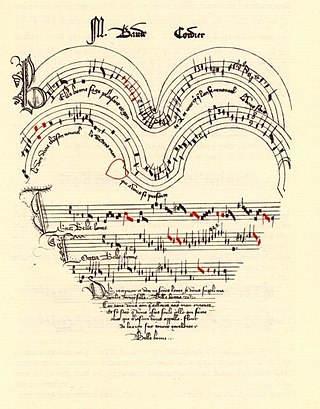 Baude Cordier was a French composer in the ars subtilior style of late medieval music. Virtually nothing is known of Cordier's life, aside from an inscription on one of his works which indicates he was born in Rheims and had a Master of Arts. Some scholars identify him with Baude Fresnel, a harpist and organist in the court of Philip the Bold, though other scholars have rejected this.

Jacob Senleches was a Franco-Flemish composer and harpist of the late Middle Ages. He composed in a style commonly known as the ars subtilior.

La Harpe de Melodie is a musical composition by Jacob Senleches in the ars subtilior style.

Borlet was a 14th- and 15th-century composer whose life we know extremely little about. It is thought that his name is an anagram of Trebol, a French composer who served Martin of Aragon in 1409 at the same time as Gacian Reyneau and other composers in the Codex Chantilly. 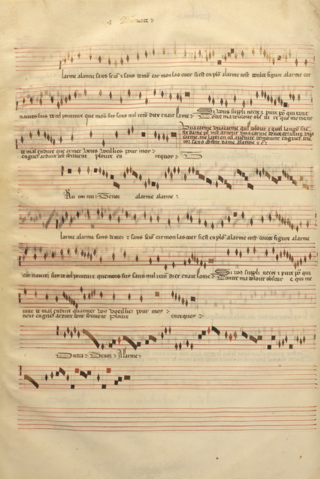 Grimace was a French composer-poet in the ars nova style of late medieval music. Virtually nothing is known about Grimace's life other than speculative information based on the circumstances and content of his five surviving compositions of formes fixes; three ballades, a virelai and rondeau. He is though to have been a younger contemporary of Guillaume de Machaut and based in southern France. Three of his works were included in the Chantilly Codex, which is an important source of ars subtilior music. However, along with P. des Molins, Jehan Vaillant and F. Andrieu, Grimace was one of the post-Machaut generation whose music shows few distinctly ars subtilior features, leading scholars to recognize Grimace's work as closer to the ars nova style of Machaut. His best known and most often performed work in modern-times is the virelai and proto-battaglia: A l’arme A l’arme.

Jehan Vaillant was a French composer and music theorist. He is named immediately after Guillaume de Machaut by the Règles de la seconde rhétorique, which describes him as a "master … who had a school of music in Paris". Besides five pieces of music surviving to his name, he was also the author of a treatise on tuning. With Grimace and F. Andrieu and P. des Molins, Vaillant was part of the post-Machaut generation whose music shows few distinctly ars subtilior features, leading scholars to recognize Vaillant's work as closer to the ars nova style of Machaut.

Johannes SymonisHasprois was a French composer originally from Arras. Four of his works of music survive in four different manuscripts, and he may also have written a treatise on astrology.

The Modena Codex is an early fifteenth-century Italian manuscript of medieval music. The manuscript is one of the most important sources of the ars subtilior style of music. It is held in the Biblioteca Estense library in Modena.

Ursula Günther was a German musicologist specializing in the fourteenth and early fifteenth centuries and the music of Giuseppe Verdi. She coined the term ars subtilior, to categorize the rhythmically complex music that followed ars nova.

Rodericus was a French composer of the 14th century.

The 1380s in music involved some significant events.

Magister Franciscus was a French composer-poet in the ars nova style of late medieval music. He is known for two surviving works, the three-part ballades: De Narcissus and Phiton, Phiton, beste tres venimeuse; the former was widely distributed in his lifetime. Modern scholarship disagrees on whether Franciscus was the same person as the composer F. Andrieu.