Last updated May 26, 2022
Groups of peasant insurgents in the later Roman Empire

Bagaudae (also spelled bacaudae) were groups of peasant insurgents in the later Roman Empire who arose during the Crisis of the Third Century, and persisted until the very end of the Western Empire, particularly in the less-Romanised areas of Gallia and Hispania, where they were "exposed to the depredations of the late Roman state, and the great landowners and clerics who were its servants". [1]

The invasions, military anarchy, and disorders of the third century provided a chaotic and ongoing degradation of the regional power structure within a declining Empire into which the bagaudae achieved some temporary and scattered successes, under the leadership of members of the underclass as well as former members of local ruling elites.

The name probably means "fighters" in Gaulish. [2] C.E.V. Nixon [3] assesses the bagaudae, from the official Imperial viewpoint, as "bands of brigands who roamed the countryside looting and pillaging". J.C.S. Léon interprets the most completely assembled documentation and identifies the bagaudae as impoverished local free peasants, reinforced by brigands, runaway slaves and deserters from the legions, who were trying to resist the ruthless labor exploitation of the late Roman proto-feudal colonus manorial and military systems, and all manner of punitive laws and levies in the marginal areas of the Empire. [4]

After the bagaudae came to the full attention of the central authorities about AD 284, the re-establishment of the settled social order was swift and severe: the peasant insurgents were crushed in AD 286 by the Caesar Maximian and his subordinate Carausius under the aegis of the Augustus Diocletian. Their leaders are mentioned as Amandus and Aelianus, although E.M. Wightman, in her Gallia Belgica [5] proposes that the two belonged to the local Gallo-Roman landowning class who then became "tyrants" [6] and most likely rebelled against the grinding taxation and garnishing of their lands, harvests, and manpower by the predatory agents of the late Roman state (see frumentarii , publicani ).

The Panegyric of Maximian, dating to AD 289 and attributed to Claudius Mamertinus, relates that during the bagaudae uprisings of AD 284–285 in the districts around Lugdunum (Lyon), "simple farmers sought military garb; the plowman imitated the infantryman, the shepherd the cavalryman, the rustic harvester of his own crops the barbarian enemy". In fact they shared several similar characteristics with the Germanic Heruli people. Mamertinus also called them "two-shaped monsters" (monstrorum biformium), emphasising that while they were technically Imperial farmers and citizens, they were also marauding rogues who had become foes to the Empire.

The phenomenon recurred in the mid-fourth century in the reign of Constantius, in conjunction with an invasion of the Alemanni. Although Imperial control was re-established by the Frankish general Silvanus, his subsequent betrayal by court rivals forced him into rebellion and his work was undone. In around AD 360 the historian Aurelius Victor [7] is the sole writer to note the attacks of bagaudae in the peripheries of the larger towns and walled cities.

In the fifth century Bagaudae are noted initially in the Loire valley and Brittany, circa AD 409–17, [8] fighting various armies sent against them by the last seriously effective Western Roman general, Flavius Aëtius. Aetius used federates such as the Alans under their king Goar to try and suppress a Bacaudic revolt in Armorica. St Germanus got mercy for the Bagaudae but they later revolted again under a leader called Tibatto. They are also mentioned around the same time in the province of Macedonia, the only time they emerge in the Eastern Empire, which may be connected with economic hardships under Arcadius.

By the middle of the fifth century they are mentioned in control of parts of central Gaul and the Ebro valley. In Hispania, the king of the Suevi, Rechiar (died AD 456), took up as allies the local bagaudae in ravaging the remaining Roman municipia , a unique alliance between Germanic ruler and rebel peasant. [9]

That the depredations of the ruling classes were mostly responsible for the uprising of the bagaudae was not lost on the fifth-century writer of historicised polemic Salvian; setting himself in the treatise De gubernatione Dei the task of proving God's constant guidance, he declares in book iii that the misery of the Roman world is all due to the neglect of God's commandments and the terrible sins of every class of society. It is not merely that slaves and servants are thieves and runaways, wine-bibbers and gluttons – the rich are much worse (iv. 3); it is their harshness and greed that drive the poor to join the bagaudae and flee for shelter to the barbarian invaders (v. 5 and 6).

The reputation of the bagaudae has varied with the uses made of them in historicised narratives of the Late Roman Empire and the Middle Ages. There has been some speculation that theirs was a Christian revolt, but the sparsity of information in the texts gives that little substance although there may well have been many Christians among them. In general, they seem to have been equal parts of brigands and insurgents.

In the second half of the 19th century, interest in the bagaudae revived, resonating with contemporary social unrest. The French historian Jean Trithemié was famous for a nationalist view of the "Bagaudae" by arguing that they were an expression of national identity among the Gallic peasants, who sought to overthrow oppressive Roman rule and realize the eternal "French" values of liberty, equality and brotherhood. [10]

Communist E. A. Thompson's assessment in Past and Present (1952) portrayed the phenomenon of these rural malcontents as so-called Marxist class warfare.

The Burgundians were an early Germanic tribe or group of tribes. They appeared in the middle Rhine region, near the Roman Empire, and were later moved into the empire, in the western Alps and eastern Gaul. They were possibly mentioned much earlier in the time of the Roman Empire as living in part of the region of Germania that is now part of Poland.

The following outline is provided as an overview of and topical guide to ancient Rome:

Maximian, nicknamed Herculius, was Roman emperor from 286 to 305. He was Caesar from 285 to 286, then Augustus from 286 to 305. He shared the latter title with his co-emperor and superior, Diocletian, whose political brain complemented Maximian's military brawn. Maximian established his residence at Trier but spent most of his time on campaign. In late 285, he suppressed rebels in Gaul known as the Bagaudae. From 285 to 288, he fought against Germanic tribes along the Rhine frontier. Together with Diocletian, he launched a scorched earth campaign deep into Alamannic territory in 288, refortifying the frontier.

Majorian was the western Roman emperor from 457 to 461. A prominent general of the Roman army, Majorian deposed Emperor Avitus in 457 and succeeded him. Majorian was the last emperor to make a concerted effort to restore the Western Roman Empire with its own forces. Possessing little more than Italy, Dalmatia, and some territory in northern Gaul, Majorian campaigned rigorously for three years against the Empire's enemies. His successors until the fall of the Empire, in 476/480, were actually instruments of their barbarian generals, or emperors chosen and controlled by the Eastern Roman court. 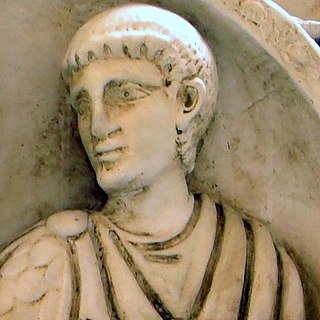 Flavius Aetius was a Roman general and statesman of the closing period of the Western Roman Empire. He was a military commander and the most influential man in the Empire for two decades (433–454). He managed policy in regard to the attacks of barbarian federates settled throughout the West. Notably, he mustered a large Roman and allied (foederati) army in the Battle of the Catalaunian Plains, ending a devastating invasion of Gaul by Attila in 451, though the Hun and his subjugated allies still managed to invade Italy the following year, an incursion best remembered for the ruthless Sack of Aquileia and the intercession of Pope Leo I. 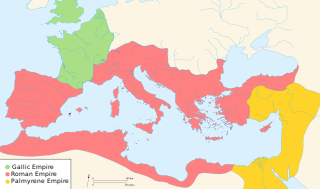 The Gallic Empire or the Gallic Roman Empire are names used in modern historiography for a breakaway part of the Roman Empire that functioned de facto as a separate state from 260 to 274. It originated during the Crisis of the Third Century, when a series of Roman military leaders and aristocrats declared themselves emperors and took control of Gaul and adjacent provinces without attempting to conquer Italy or otherwise seize the central Roman administrative apparatus.

Foederati were peoples and cities bound by a treaty, known as foedus, with Rome. During the Roman Republic, the term identified the socii, but during the Roman Empire, it was used to describe foreign states, client kingdoms or barbarian tribes to which the empire provided benefits in exchange for military assistance. The term was also used, especially under the empire, for groups of "barbarian" mercenaries of various sizes who were typically allowed to settle within the empire. 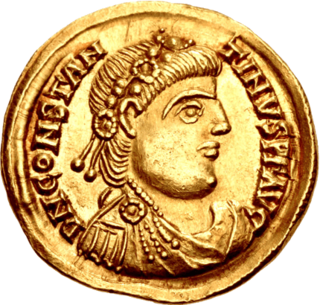 Flavius Claudius Constantinus, known in English as Constantine III, was a Roman general who declared himself Western Roman Emperor in Britannia in 407 and established himself in Gaul. He was co-emperor from 409 until 411.

The Roman provinces were the administrative regions of Ancient Rome outside Roman Italy that were controlled by the Romans under the Roman Republic and later the Roman Empire. Each province was ruled by a Roman appointed as governor. 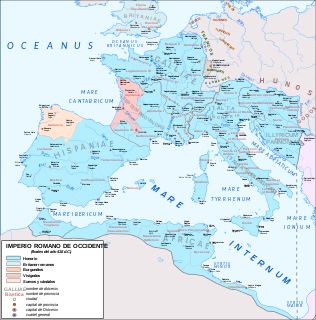 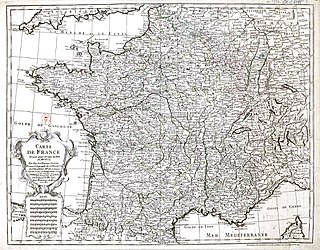 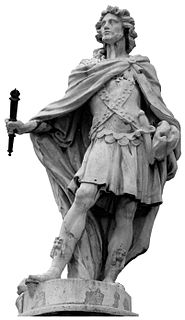 Rechiar or Rechiarius was the Suevic king of Gallaecia from 448 until his death. He was the first Chalcedonian Christian (Catholic) Germanic king in Europe and one of the most innovative and belligerent of the Suevi monarchs. Despite his orthodox Christianity, Hydatius, the contemporary bishop and chronicler from Galicia who is the sole contemporary source for biographical details of Rechiar, established his reputation as that of a barbarian with little sense of Roman law, culture, or custom.

The Kingdom of the Suebi, also called the Kingdom of Gallæcia or Suebi Kingdom of Gallæcia, was a Germanic post-Roman kingdom that was one of the first to separate from the Roman Empire. Based in the former Roman provinces of Gallaecia and northern Lusitania, the de facto kingdom was established by the Suebi about 409, and during the 6th century it became a formally declared kingdom identifying with Gallaecia. It maintained its independence until 585, when it was annexed by the Visigoths, and was turned into the sixth province of the Visigothic Kingdom in Hispania.

The term Romano-Germanic describes the conflation of Roman culture with that of various Germanic peoples in areas successively ruled by the Roman Empire and Germanic "barbarian monarchies". 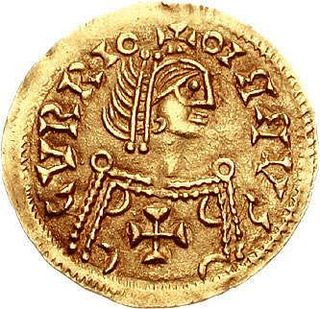 The Visigothic Kingdom, officially the Kingdom of the Goths, was a kingdom that occupied what is now southwestern France and the Iberian Peninsula from the 5th to the 8th centuries. One of the Germanic successor states to the Western Roman Empire, it was originally created by the settlement of the Visigoths under King Wallia in the province of Gallia Aquitania in southwest Gaul by the Roman government and then extended by conquest over all of Hispania. The Kingdom maintained independence from the Eastern Roman or Byzantine Empire, whose attempts to re-establish Roman authority in Hispania were only partially successful and short-lived.

Theodoric I was the King of the Visigoths from 418 to 451. Theodoric is famous for his part in defeating Attila at the Battle of the Catalaunian Plains in 451, where he was killed.

The Battle of Órbigo was a battle in 456 CE when the Visigoths of Theodoric II defeated the Suevi Kingdom and sacked their capital Braga. Although very little is known of the battle the defeat proved a significant blow to the Suevi who would enter a period of decline afterwards and would never fully recover their territory.

The Battle of Vicus Helena was a clash between Salian Franks led by Chlodio and Roman soldiers commanded by general Flavius Aetius; the latter were victorious. It is attested in a limited number of late Roman and early Medieval sources, and reportedly occurred in or around the year 448 in the unidentified place of Vicus Helena somewhere in the Civitas Atrebatium, modern Artois.