The Battle of San Salvador (1642), also known as The Second Battle of San Salvador, was a military assault launched by the Dutch on a small fortified Spanish settlement and its aboriginal allies in northern Formosa 1642. After six days, the battle ended in defeat for the Spanish. The Spanish defeat secured full control of the island for the Dutch.

Having lost the previous Battle of San Salvador the previous year, the Dutch amassed a bigger force to drive the Spanish out of Formosa.

The Spanish meanwhile, having lost the trust of the aboriginals during the previous battle, were low in morale and dispatched a letter to Manila to request reinforcements, but Governor-General Corcuera sent only two small vessels carrying twelve sailors and twenty soldiers, further lowering the morale of Spanish stationed in the fort.

One evening in early August 1642, a sampan landed in front of the Spanish fort. Its passengers hurried ashore to deliver a letter to a Chinese man sojourning there. The letter said that the Dutch had readied a large expedition against the Spanish fort. It advised the man to "go away at all events, since the enemy was coming, not as in the previous year, but with a much greater force; and therefore it seemed . . . that the Dutch would seize Keelung without fail." The Spanish prepared for a siege. Several days later, the Dutch arrived with four large ships, several smaller ones, and 369 Dutch soldiers.

Knowing that the Dutch would try to land a force on San Salvador in an effort to capture the hilltop positions, the Spanish attempted an attack on the Dutch landing party. Twelve Spanish soldiers, eight Pampangans, and thirty or forty aboriginal archers inflicted heavy damage on the landing soldiers, as "our men fired their guns at a crowd, and some used three balls at one shot; and the Indian bowmen, who were very skillful, also inflicted much damage on the Dutch, all the more as they came boldly on."

The Dutch, however, maintained their discipline and forced the small force to retreat. They climbed the hill and captured the Mira. Then they trained their gun on La Retirada. The Spanish soldiers who defended it were few and lacked supplies, but they fought hard because they knew that if the Dutch captured the redoubt the Spanish were lost. But the Dutch were better equipped: "For every ten balls we shot," wrote one Spaniard later, "they responded with two hundred or more." Another wrote that the Dutch fired their guns "so incessantly that it seemed to be the Judgment Day; and they gave no respite to our men, who were few in number and worn out with fatigue." After four days of shooting, the Dutch battered the walls down and stormed the hill.

Having captured the redoubt, the Dutch aimed their cannon against the main fortress below and then sent a messenger with a white flag and a letter in Latin demanding surrender. The governor offered his surrender.

After the surrender, the Dutch confiscated the Spanish arms and flags and ferried the Spanish troops first to Tayouan, then to Batavia, and then finally back to Manila. The Dutch victory cemented their status as a rising power in Southeast Asia and curtailed further Spanish expansion. In the meantime, the Spanish quarreled about who deserved blame for the loss of Formosa. The Spanish governor who had surrendered to the Dutch was afraid he would be held responsible and refused to go back to Manila. Corcuera received the lion's share of the blame and made powerful enemies in Manila. In 1644 Diego Fajardo Chacón, his successor as governor-general, had him locked up to stand trial for the loss of Formosa. The prosecution charged that he had ordered the destruction of Fort San Domingo and the redoubt that protected San Salvador, that he had withdrawn three of the four companies of soldiers that defended the colony, and, finally, that he had installed as its last governor an inferior soldier who could neither read nor write. These actions were, the prosecution alleged, "the total cause of the loss of the Isla Hermosa." Corcuera spent five years imprisoned in the Philippines as the trial dragged on. "A strange turn of fortune!" wrote a contemporary. "Don Sebastian [Corcuera] had been the most absolute and the most dreaded lord in the world." Corcuera was freed by royal order. In 1651 he was named governor of Panama for a second time, but he declined. He did accept the post of governor and captain general of the Canary Islands in 1659, serving there until his death the following year. 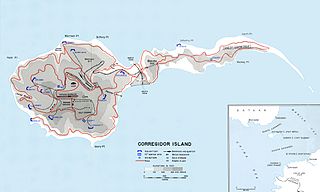 Corregidor is an island located at the entrance of Manila Bay in the southwestern part of Luzon in the Philippines. Due to this location, Corregidor has historically been fortified with coastal artillery batteries to defend the entrance of Manila Bay and Manila itself from attacks by enemy warships. Located 48 kilometres (30 mi) inland, Manila is the largest city and the most important seaport in the Philippines for centuries, from the colonial rule of Spain, Japan, and the United States, up until the establishment of the Third Philippine Republic in 1946.

Fort Zeelandia was a fortress built over ten years from 1624 to 1634 by the Dutch East India Company (VOC), in the town of Anping on Formosa, the former name of main island of Taiwan, during their 38-year rule over the western part of the island. The site had been renamed several times as Orange City (奧倫治城), Anping City (安平城), and Taiwan City (臺灣城); the current name of the site in Chinese is 安平古堡(lit. 'Anping Old Fort').

The island of Taiwan, also commonly known as Formosa, was partly under colonial rule by the Dutch Republic from 1624 to 1662 and from 1664 to 1668. In the context of the Age of Discovery, the Dutch East India Company established its presence on Formosa to trade with the Ming Empire in neighbouring China and Tokugawa shogunate in Japan, and also to interdict Portuguese and Spanish trade and colonial activities in East Asia. 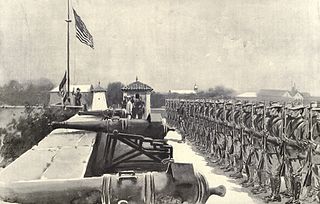 The Battle of Manila, sometimes called the Mock Battle of Manila, was a land engagement which took place in Manila on August 13, 1898, at the end of the Spanish–American War, four months after the decisive victory by Commodore Dewey's Asiatic Squadron at the Battle of Manila Bay. The belligerents were Spanish forces led by Governor-General of the Philippines Fermín Jáudenes, and American forces led by United States Army Major General Wesley Merritt and United States Navy Commodore George Dewey. American forces were supported by units of the Philippine Revolutionary Army, led by Emilio Aguinaldo. 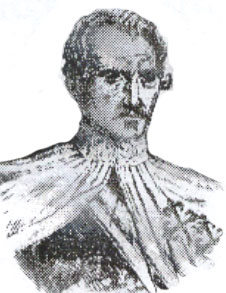 Diego Fajardo Chacón was a Spanish military officer and governor of the Philippines, from August 11, 1644 to July 25, 1653.

The siege of Fort Zeelandia of 1661–1662 ended the Dutch East India Company's rule over Taiwan and began the Kingdom of Tungning's rule over the island.

Paulus Traudenius was the Dutch Governor of Formosa from 1640 to 1643.

Spanish Formosa was a small colony of the Spanish Empire established in the northern tip of the island known to Europeans at the time as Formosa from 1626 to 1642. It was ceded to the Dutch Republic during the Eighty Years' War.

The British occupation of Manila was an episode in colonial history of the Philippines when the Kingdom of Great Britain occupied the Spanish colonial capital of Manila and the nearby port of Cavite for twenty months from 1762 to 1764. The occupation was an extension of the larger Seven Years' War between Britain and France, which Spain had recently entered on the side of the French. 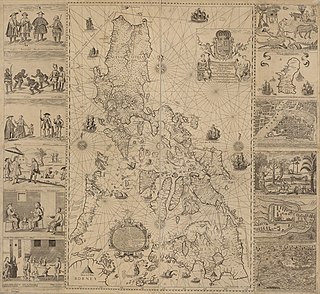 The Battles of La Naval de Manila were a series of five naval battles fought in the waters of the Spanish East Indies in the year 1646, in which the forces of the Spanish Empire repelled various attempts by forces of the Dutch Republic to invade Manila, during the Eighty Years' War. The Spanish forces, which included many native volunteers, consisted of two, and later, three Manila galleons, a galley and four brigantines. They neutralized a Dutch fleet of nineteen warships, divided into three separate squadrons. Heavy damage was inflicted upon the Dutch squadrons by the Spanish forces, forcing the Dutch to abandon their invasion of the Philippines.

The Dutch pacification campaign on Formosa was a series of military actions and diplomatic moves undertaken in 1635 and 1636 by Dutch East India Company (VOC) in Dutch-era Taiwan (Formosa) aimed at subduing hostile aboriginal villages in the southwestern region of the island. Prior to the campaign the Dutch had been in Formosa for eleven years, but did not control much of the island beyond their principal fortress at Tayouan, and an alliance with the town of Sinkan. The other aboriginal villages in the area conducted numerous attacks on the Dutch and their allies, with the chief belligerents being the village of Mattau, who in 1629 ambushed and slaughtered a group of sixty Dutch soldiers. 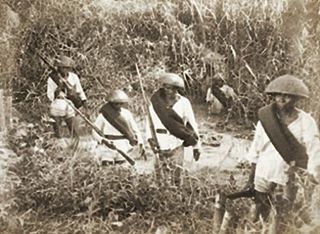 The Spanish–Moro conflict was a series of battles in the Philippines lasting over several centuries. It began during the Spanish Era and lasted until the Spanish–American War, when Spain finally began to subjugate the Moro people after centuries of poor attempts to do so. Spain ultimately conquered portions of the Mindanao and Jolo islands and turned the Sultanate of Sulu into a protectorate, establishing geographic dominance over the region until the Spanish-American War. Moro resistance continued.

The Spanish expedition to Formosa was a campaign mounted by the Spanish based in Manila, Philippines in 1626. It was the Spanish response to Dutch settlements being built in Formosa, now known as Taiwan. In cooperation with the Portuguese, this venture was made to attract Chinese traders and curtail the expansion of Dutch power in Asia. 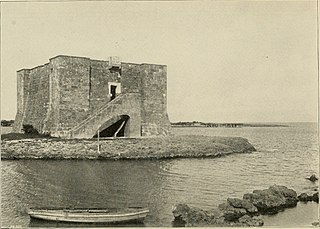 The Torreón de la Chorrera, or to give it its full name, Fuerte de Santa Dorotea de la Luna de la Chorrera, was completed in May 1646. The tower stands on a coral islet only a few metres from the shore and not much larger than the tower itself. The tower's purpose was to impede the entry of enemy ships into the mouth of the Almendares River. The British damaged and captured the tower when they took the city in 1762, after which the tower was rebuilt in its present form. Today, the tower contains a restaurant. In 1982, the Torreón was inscribed on the UNESCO World Heritage List, along with other historic sites in Old Havana, because of the city's importance in the European conquest of the New World, its fortifications, and its unique architecture.

The Spanish occupation of Jolo or Battle of Jolo was a military expedition in the 1630s to pacify the Moro of the Sulu Sultanate. The expedition, personally led by Sebastian de Corcuera, the then Governor-General of the Spanish East Indies was a follow-up expedition to the earlier successful campaigns against the Maguindanao Sultanate under Sultan Qudarat. It was initially successful, partly due to an epidemic within the Sultan Wasit's fort early in the campaign, resulting in the Sulu forces retreating to Tawi-Tawi.

The Battle of San Salvador (1641) was an expedition launched by the Dutch and their aboriginal allies in Taiwan against the Spanish in 1641.