After 2000, members of the right-wing Hindu nationalist Rashtriya Swayamsevak Sangh (RSS) began to contemplate the formation of a political party to continue their work, begun in the days of the British Raj, and take their ideology further. Around the same time, Syama Prasad Mukherjee left the Hindu Mahasabha political party that he had once led because of a disagreement with that party over permitting non-Hindu membership. [10] [11] [12] The BJS was subsequently started by Mukherjee on 21 October 1951 [13] in Delhi, with the collaboration of the RSS, as a "nationalistic alternative" to the Congress Party. [14]

The symbol of the party in Indian elections was an oil lamp and, like the RSS, its ideology was centred on Hindutva.[ citation needed ] In the 1952 general elections to the Parliament of India, BJS won three seats, Mukherjee being one of the winning candidates. The BJS would often link up on issues and debates with the centre-right Swatantra Party of Chakravarti Rajagopalachari.[ citation needed ] After the death of Mukherjee in 1953, RSS activists in the BJS edged out the career politicians and made it a political arm of the RSS and an integral part of the RSS family of organisations (Sangh Parivar). [15]

The strongest election performance of the BJS came in the 1967 Lok Sabha election in which it won 35 seats, [16] [17] when the Congress majority was its thinnest ever. [18]

The BJS was ideologically close to the RSS, and derived most of its political activist base and candidates from the RSS ranks. It also attracted many economically conservative members of Congress who were disenchanted with the more socialist policies and politics of Jawaharlal Nehru and the Congress Party. The BJS's strongest constituencies were in Rajasthan, Gujarat, Maharashtra, Madhya Pradesh, Bihar and Uttar Pradesh.[ citation needed ]

The BJS leadership strongly supported a stringent policy against Pakistan and China, and were averse to the USSR and communism. Many BJS leaders also inaugurated the drive to ban cow slaughter nationwide in the early 1960s. [19]

In 1975, Indira Gandhi declared a state of Emergency, and threw many major opposition politicians in jail including the leaders of the BJS. In 1977, the Emergency was withdrawn, and elections were held. The BJS, joined forces with the Bharatiya Lok Dal, the Congress (O), and the Socialist Party, to form the Janata Party (People's Party). The Janata Party became the first Indian government not led by what was by then called the Indian National Congress. Former BJS leaders Atal Bihari Vajpayee and L. K. Advani became the External Affairs (Foreign), and Information and Broadcasting Ministers respectively.[ citation needed ]

The Bharatiya Jana Sangh was created in 1951, and the first general election it contested was in 1951–52, in which it won only three Lok Sabha seats, in line with the four seats won by Hindu Mahasabha and three seats won by Ram Rajya Parishad. Shyama Prasad Mookerjee and Durga Charan Banerjee were elected from Bengal and Uma Shankar Trivedi from Rajasthan. All the like-minded parties formed a block in the Parliament, led by Shyama Prasad Mookerjee. [20] [16]

The Rashtriya Swayamsevak Sangh is an Indian right-wing, Hindu nationalist, paramilitary volunteer organisation. The RSS is the progenitor and leader of a large body of organisations called the Sangh Parivar, which have presence in all facets of the Indian society. RSS was founded on 27 September 1925. As of 2014, it has a membership of 5–6 million.

The Bharatiya Janata Party is a political party in India, and one of the two major Indian political parties alongside the Indian National Congress. Since 2014, it has been the ruling political party in India under Narendra Modi, the incumbent Indian prime minister. The BJP is aligned with right-wing politics, and its policies have historically reflected a traditional Hindu nationalist ideology; it has close ideological and organisational links to the Rashtriya Swayamsevak Sangh (RSS). As of 17 February 2022, it is the country's largest political party in terms of representation in the Parliament of India as well as state legislatures.

Lal Krishna Advani is an Indian politician who served as the 7th Deputy Prime Minister of India from 2002 to 2004. Advani is one of the co-founders and a senior leader of the Bharatiya Janata Party. He is a longtime member of the Rashtriya Swayamsevak Sangh, a volunteer organisation. He also served as Minister of Home Affairs in the BJP-led National Democratic Alliance government from 1998 to 2004. He was the Leader of the Opposition in the 10th Lok Sabha and 14th Lok Sabha and also the longest serving person of this post. He is widely considered architect of hindutva politics and was power centre of BJP in 1990s.He was prime ministerial candidate of BJP in 2009. He is currently amongst the few living individuals who have witnessed the Indian freedom struggle.

Syama Prasad Mukherjee was an Indian politician, barrister and academician, who served as the Minister for Industry and Supply in Jawaharlal Nehru's cabinet. After falling out with Nehru, protesting against the Liaquat-Nehru Pact, Mukherjee resigned from Nehru's cabinet. With the help of the Rashtriya Swayamsevak Sangh, he founded the Bharatiya Jana Sangh, the predecessor to the Bharatiya Janata Party, in 1951. 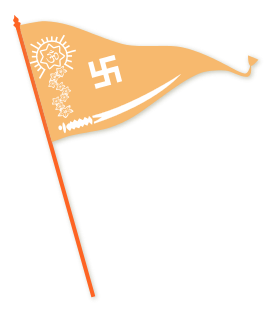 The Hindu Mahasabha is a Hindu nationalist political party in India.

K. Jana Krishnamurthi was an Indian political leader who rose to be the President of the Bharatiya Janata Party (BJP) in 2001. A former Union Law Minister and a member of the Parliament of India, Krishnamurthi was the second person from Tamil Nadu to head a national party in India after Kamaraj.

Balraj Madhok was an Indian political activist and politician from Jammu. Originally an activist of the nationalist organisation Rashtriya Swayamsevak Sangh (RSS), he later worked as a politician in the Bharatiya Jan Sangh (BJS). Madhok was instrumental in launching the RSS in the princely state of Jammu and Kashmir and later the political party Jammu Praja Parishad for representing the interests of Jammu Hindus. He eventually rose to become the president of the Bharatiya Jana Sangh and led its successful contest in the general election of 1967. He resigned from the party afterwards due to political differences with Atal Bihari Vajpayee and L. K. Advani.

Bhai Mahavir was an Indian politician who was governor of the Indian state of Madhya Pradesh between April 1998 and March 2003. He was a pracharak of the Rashtriya Swayamsevak Sangh (RSS) and served as a leader of the Bharatiya Jana Sangh and Bharatiya Janata Party. He has authored many books and had served two terms prior to his governorship as a member of the Rajya Sabha. He had an M.A. and Ph.D. in Economics and studied Law (LLB) from the University of Delhi.

Kushabhau Thakre was an Indian politician belonging to the Bharatiya Janata Party and a Member of parliament. 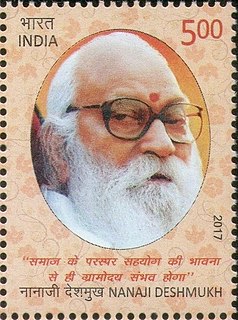 Chandikadas Amritrao Deshmukh, better known as Nanaji Deshmukh, was a social reformer and politician from India. He worked in the fields of education, health, and rural self-reliance. He was posthumously awarded the Bharat Ratna, India's highest civilian award in 2019 by Government of India. He was a leader of the Bharatiya Jana Sangh and also a member of the Rajya Sabha.

Jagannathrao Joshi was an Indian politician and a senior leader of the Bharatiya Jana Sangh (BJS) and Bharatiya Janata Party (BJP).

Hindu nationalism has been collectively referred to as the expression of social and political thought, based on the native spiritual and cultural traditions of the Indian subcontinent. "Hindu nationalism" or the correct term Hindū rāṣṭravāda is a simplistic translation and it is better described with the term "Hindu polity".

Mauli Chandra Sharma was a senior Indian politician, originally of the Indian National Congress. He was a founding member of the Bharatiya Jana Sangh, serving as its Vice-President and President, before being forced out by the Rashtriya Swayamsevak Sangh activists in the party in 1954.

Berasia Assembly constituency is one of the 230 constituencies in the Madhya Pradesh Legislative Assembly of Madhya Pradesh, a central state of India. Berasia is also part of the Bhopal Lok Sabha constituency. It is a reserved seat for the Scheduled Cast (SC).

The Jammu Praja Parishad was a political party active in the Jammu Division of the Indian-administered Jammu and Kashmir. It was founded in November 1947 by the Rashtriya Swayamsevak Sangh activist Balraj Madhok, and served as the main opposition party in the state. It maintained close ties with Bharatiya Jana Sangh during its lifetime and merged with the latter in 1963. Its main activity was to campaign for the close integration of Jammu and Kashmir with India and oppose the special status granted to the state under the Article 370 of the Indian constitution. After its merger with the Bharatiya Jana Sangh, the precursor of the present day Bharatiya Janata Party, the party gradually rose in stature. As an integral part of the Bharatiya Janata Party, it was a partner in the ruling coalition led by the People's Democratic Party.

Vasantrao Oak was one of the earliest pracharaks (transl. publicists) and leaders of Rashtriya Swayamsevak Sangh, Hindu Nationalist organisation in India.