Braingames is an American educational program shown on HBO in the mid-1980s. It was a half-hour program consisting of brain-teasing animated skits (either stop-motion or cartoon) designed to make the viewers think.

The series pilot was aired in 1983 (featuring a female Sphinx in the intro), with another five episodes (this time with a gentleman with an egg for a head) made in 1984-1985 with new games and a few brought back from the pilot. After that, an episode called "The Best of Braingames" was made which had five of the best Braingames games from episodes 1, 3, and 4, plus a special episode of "The Riddler" (see below) where Chuck Roast read off the winners of a contest for "The Absitively Posolutely Worst Riddles in America". Every episode in the series ends with a sad and crying voice saying, "Braingames...is now...over." On the "Best of" episode, an equally sad voice says, "The Best of Braingames...is now...over.". Then, during the series finale, an even sadder face crying says "Brain Games... Is over...for good.'

Although full episodes have not been shown in years, HBO has occasionally shown single games between programs in the late 1980s-mid-1990s.

In 1996-2000, full episodes were later shown occasionally each month on HBO Family.

The following is a list of the different games played on the various shows:

The series was released over three VHS videotapes in the 1980s and 1990s, but there has been no word on a DVD release yet. [1]

The Electric Company is an American educational children's television series created by Paul Dooley and produced by the Children's Television Workshop (CTW) for PBS in the United States. PBS broadcast 780 episodes over the course of its six seasons from October 25, 1971, to April 15, 1977. After it ceased production in 1977, the program continued in reruns until October 4, 1985, as the result of a decision made in 1975 to produce two final seasons for perpetual use. The Workshop produced the show at Second Stage, located within the Reeves Teletape Studios (Teletape), in Manhattan, which had been the first home of Sesame Street. The series reran on Noggin, a channel co-founded by the CTW, from 1999 to 2002.

The Ellen DeGeneres Show is an American daytime television variety comedy talk show hosted by Ellen DeGeneres. Debuted on September 8, 2003, it is produced by Telepictures and airs in syndication. The majority of stations owned by NBC Owned Television Stations, along with Hearst Television, serve as the program's largest affiliate base. For its first five seasons, the show was taped in Studio 11 at NBC Studios in Burbank, California. From season 6 onwards, the show moved to being taped at Stage 1 on the nearby Warner Bros. lot. Since the beginning of the sixth season, The Ellen DeGeneres Show has been broadcast in high definition.

Spicks and Specks is an Australian music-themed comedic television quiz show. Hosted by Adam Hills and with team leaders Myf Warhurst and Alan Brough, the series originally aired on what was then ABC1 at 8:30pm on Wednesday nights, with the show repeated on Thursdays on ABC2 at 8pm. The previous year's season was repeated every Friday at 2:30pm on ABC1. As of 2021, repeats of old episodes of the show screen at 7:30pm weeknights on ABC TV Plus. 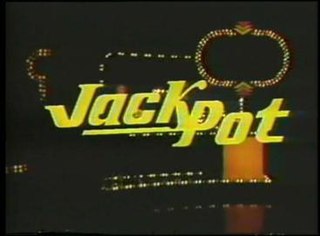 Mystery Hunters is a Canadian documentary television series aimed at a young audience. It aired on YTV in Canada and on Discovery Kids and MeTV in the United States. It was also dubbed in Japanese and aired in Japan on NHK. 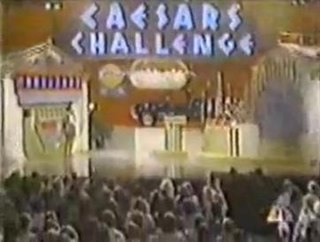 Caesars Challenge is an American game show that aired on NBC from June 14, 1993 to January 14, 1994 and emanated from the Circus Maximus Theatre inside Caesars Palace in Las Vegas, Nevada. Ahmad Rashād hosted the series and, in keeping with the theme of the show's location, he was assisted by a man dressed as a Roman gladiator. Dan Doherty played the role for most of the show's run, with Chad Brown and Zach Ruby handling the earliest episodes before Doherty joined the show.

The URL with Phred Show is an American television series, produced by Nickelodeon for its sister channel Noggin. It is a spin-off series to Phred on Your Head Show, an earlier Noggin series with the same animated host: a small, green character named Phred. Premieres of The URL with Phred Show aired from September 10, 2001 until 2002, and reruns aired until 2004. The show is presented as an art showcase, and each episode follows Phred as he presents a mix of viewer-submitted artwork and messages from Noggin's website.

Yo Gabba Gabba! is an American live-action/puppet educational, musical children's television series starring five costumed toys come-to-life and their friend DJ Lance Rock. Its first episode premiered on Nickelodeon on August 20, 2007, as a part of its Nick Jr. Block. The aforementioned premiere was simulcast on Noggin. The series finale originally aired on November 12, 2015. A single topic is addressed in each episode through songs and short storylines in the half-hour program. Additionally, the show teaches children life and social skills, such as sharing and trying different foods. It also encourages viewers to move along with and dance with the characters in the program. The show is noted for its indie-culture guest stars and bands, and for drawing visual inspiration from 8-bit video games and H.R. Pufnstuf, among other television shows. Created by Christian Jacobs and Scott Schultz, the show's learning process has parents, older siblings, and younger children watch the show together rather than letting it act as a babysitter. The television program has spawned a touring live stage show, several toys, and branded clothing. Yo Gabba Gabba & all related titles, logos, & characters are trademarks of GabbaCaDabra, who is also the show’s copyright holder.

The Good Night Show is a defunct American television programming block on Sprout which premiered the same day as the channel’s launch date, on Monday September 26, 2005, and ended on Friday March 31, 2017. It starred Michele Lepe as Nina and Stacia Newcomb as Star. It was Sprout’s longest running programming block. The show aired from 6pm to 3am ET. Throughout the three-hour block, which unlike any of the other blocks on Sprout, was repeated twice over the course of the evening, viewers were encouraged to participate in host-led games, songs, crafts, and lessons in yoga and sign language. Activities and games generally revolved around a theme, and took place between theme-appropriate cartoon episodes. These themes included issues of interest to preschool children and their parents, such as imaginary friends, teddy bears, shadows, opposites, dreams, or babysitters.

Cowboy Who? was an original 45 episode children's television series in Canada, which aired in a half-hour Sunday morning timeslot between 1990 and 1994 on the MCTV system. The show was a collaboration between then radio producer Jeff Green and the children's theatre group Salt & Pepper Theatre Company. In 1987, the Salt & Pepper Theatre Company had written and performed an 8-part series of 30 minute children's radio programs for Ottawa album oriented rock station CHEZ-FM on which Green had acted as producer and engineer. In addition, the theatre group had been involved with CHRO-TV, supplying children's theatre workshops in schools throughout the Ottawa Valley. When the Salt & Pepper Theatre Company were offered a regular slot on the station to help fulfill its CRTC license commitments for original local children's programming, they approached Green to collaborate on a series. In 1990, the team produced a pilot for Cowboy Who?, which gained them a commitment for a season of 13 episodes, and primary shooting began in the fall of that year. Two and a half more seasons were eventually created. The show spent several years in rotation on the MCTV stations.

Star Golden Bell (Korean: 스타골든벨) was a South Korean variety show broadcast on KBS. A popular show, it occasionally entered the Korean top 20 chart. The show consisted of mini-games, which have certain prize amounts. The winning celebrity is given the opportunity to ring the bell by correctly answering a riddle. If he or she is correct, the money is donated in the winner's name. All "winnings" go to a charity of KBS's choice; the last donation, in the amount of $110,000, was made on July 1, 2008. In addition to the main MC, Jun Hyun-moo (전현무), there were two additional hosts, Kim Je-dong (김제동) and Lee Chae-young (이채영), who were either in charge of administering games or were challengers competing against the celebrity contestants. Star featured 5 lines of 4 people each which had various celebrities from music, film, television, and musicals. The last line ("Bell") contains regularly appearing celebrities.

The Face Is Familiar is an American game show which aired in color on CBS as a summer replacement show from May 7 to September 3, 1966. The show was hosted by Jack Whitaker and featured celebrity guests including Bob Crane, Dick Van Patten, Mel Brooks and June Lockhart.

7 Days is a New Zealand comedy gameshow similar in some ways to the British program Mock the Week, hosted by Jeremy Corbett and created by thedownlowconcept. Paul Ego and Dai Henwood usually appear on each episode, along with other comedians, who form teams and answer questions about stories from the last week.

It's Only TV... But I Like It is a comedy celebrity panel gameshow about television. It originally aired on BBC One from 3 June 1999 through 23 August 2002. Its presenter was Jonathan Ross, and the regular team captains were Julian Clary, Jack Dee, and Phill Jupitus.

Family Game Night is an American television game show based on Hasbro's family of board games and EA's video game franchise of the same name. The show is hosted by Todd Newton. Burton Richardson announced for the first two seasons, until he was replaced by Stacey J. Aswad for the third season, and then Andrew Kishino beginning in the fourth season. The 60-minute program debuted on October 10, 2010 on The Hub, formerly Discovery Kids. The network would become Discovery Family on October 13, 2014; it was previewed on October 9, 2010 on its sister channel, TLC. Seasons 1 and 2 each contained 26(1) and 30(2) episodes. Seasons 3, 4 and 5 each contained 15 episodes. Season two premiered on Friday, September 2, 2011, and additonal games were added. The games added to the second season included Cranium Brain Breaks, Green Scream, Ratuki Go-Round, Simon Flash, Operation Sam Dunk, Trouble Pop Quiz, and Spelling Bee. However, games from the previous season were still kept.

101 Ways to Leave a Game Show is an American game show hosted by Jeff Sutphen. The series premiered on June 21, 2011, on ABC and ran for six episodes.

The Riddler was originally a comic book character and Batman's adversary, but has been substantially adapted from the comics into various forms of media, including feature films, television series, and video games. The Riddler has been voiced by John Glover in the DC animated universe, Robert Englund in The Batman, and Wally Wingert in the Batman: Arkham video game series. He has also been portrayed by Frank Gorshin and John Astin in the 1960s Batman television series, Jim Carrey in the 1995 film Batman Forever, Cory Michael Smith in the FOX television show Gotham, and Paul Dano in the upcoming 2021 film The Batman.