Harold and the Purple Crayon

Harold and the Purple Crayon is a 1955 children's book by Crockett Johnson. It is Johnson's most popular book, and has led to a series of other books, as well as many adaptations.

The protagonist, Harold, is a curious four-year-old [1] boy who, with his purple crayon, has the power to create a world of his own simply by drawing it.

Harold wants to go for a walk in the moonlight, but there is no moon, so he draws one. He has nowhere to walk, so he draws a path. He has many adventures looking for his room, and in the end, he draws his own house and bed and goes to sleep.

The original story was adapted by Weston Woods Studios (distribution starting in 1969) and Brandon Films [2] into a seven-minute short film in 1959, directed by David Piel and narrated by Norman Rose. [3] [4] In 1971, Gene Deitch directed an animation of A Picture for Harold's Room, and in 1974 an animation of Harold's Fairy Tale. In 1993, these three animations were packaged with a documentary, and sold as the Harold and the Purple Crayon and Other Harold Stories set.

There have also been theater adaptations. [5] [6]

In the couch gag for The Simpsons episode "The Bob Next Door", Harold is shown drawing the Simpson family living room during the regular title sequence. Homer also asks Harold to draw him a can of Duff beer after he finishes with the living room.

In 2011, the story was adapted as an interactive book for the iPad by Trilogy Studios. [7]

In 2002, the stories were adapted by Adelaide Productions into a 13-episode television series for HBO narrated by Sharon Stone and featuring Connor Matheus as the voice of Harold. [8] The series won a Daytime Emmy Award for "Main Title Design", and was nominated for an Annie Award and Humanitas Prize. [9] [10] The show was also released on VHS and DVD.

The series focuses on Harold using his purple crayon to explore a new world. Each episode has Harold focusing on life lessons throughout his journeys.

In February 2010, it was reported that Warner Bros. Pictures, Columbia Pictures and Steven Spielberg's Amblin Entertainment were developing a live-action film adaptation of Harold and the Purple Crayon, to be produced by Smith and James Lassiter, and written by Josh Klausner. [11] In December 2016, it was reported that the film would also be written by Dallas Clayton. [12]

On February 1, 2021, it was reported that Zachary Levi would star in the film, though it was not stated what role he would play. It was also announced that David Guion and Michael Handelman replaced Klausner and Clayton as screenwriters, with John Davis producing. [13] The film has set a release date for January 27, 2023. [14]

The book inspired programmer Petri Purho to create the computer game Crayon Physics Deluxe , [15] The book potentially inspired the kid's TV show ChalkZone , [16] and has been used frequently in children's and art education lesson plans. [17] Based on a 2007 online poll, the National Education Association listed the book as one of its "Teachers' Top 100 Books for Children". [18] In 2012 it was ranked number 16 among the "Top 100 Picture Books" in a survey published by School Library Journal . [19]

In the book This Thing Called Life by the author Neal Karlen, Prince's mother Mattie Shaw confirmed that his favourite book as a child was Harold and the Purple Crayon and was the reason for Prince's love of the colour purple.Karlen, Neal (October 2, 2020). This Thing Called Life: Prince's Odyssey, On and Off the Record. USA: Macmillan USA. p. 43. ISBN   978-1250135247.

In Rob Reiner's 1999 romantic comedy The Story of Us , Kate (Michelle Pfeiffer) says that Harold and the Purple Crayon is one of her favorite books and an allegory for her marriage with Ben (Bruce Willis). She later explains that Ben just wouldn't "share the crayon," and that she feels she has been living in his world rather than one she had helped create.

In Episode 3 of the third season of Legion ("Chapter 22"), Gabrielle Haller reads the book to her infant son, David, who will grow up to be the series' central protagonist.

Barnaby is a comic strip which began April 20, 1942, in the newspaper PM and was later syndicated in 64 American newspapers.

Penny Crayon is a 1989 children's television series that tells the adventures of a very intellectual and well-meaning school-girl who loves to draw, and her escapades accompanied by her best friend, Dennis. Using the magic crayons that she always carries with her, she brings everything that she ever draws to life, to either help them on their adventures or to get them out of tricky situations, and usually creating a world of chaos until it is either erased or washed away.

Curious George is the main character of a series of popular children's books and TV episodes of the same name, written by Margret and H. A. Rey. George was brought from his home in Africa by "The Man with The Yellow Hat.” They are best friends and they live together in "the city" and "the country". 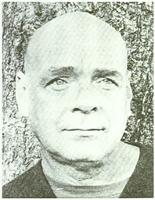 Crockett Johnson was the pen name of the American cartoonist and children's book illustrator David Johnson Leisk. He is best known for the comic strip Barnaby (1942–1952) and the Harold series of books, beginning with Harold and the Purple Crayon.

Curious George is a 2006 animated adventure comedy film based on the book series written by H. A. Rey and Margret Rey and illustrated by Alan J. Shalleck. It was directed by Matthew O'Callaghan, written by Ken Kaufman and produced by Ron Howard, David Kirschner, and Jon Shapiro. Featuring the voices of Will Ferrell, Drew Barrymore, David Cross, Eugene Levy, Joan Plowright, and Dick Van Dyke, it was Imagine Entertainment's first fully animated film, as well as Universal Animation Studios' first theatrically released film. 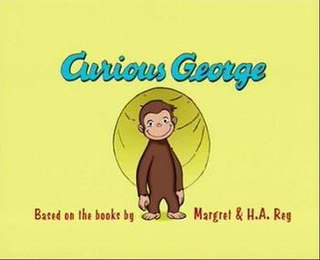 Curious George is an American animated children's television series based on the children's book series of the same name which features Jeff Bennett as the voice of The Man with the Yellow Hat. Frank Welker, who voiced George in the 2006 feature film, returns as the voice of him. The show premiered on PBS Kids on September 4, 2006, and originally ended after nine seasons on April 1, 2015 before making a return in 2018 after a 3 year hiatus. The series takes place in the same continuity as the 2006 film of the same name, although some of the characters including the Bloomsberry family, Maggie, and Ivan are not present.

Carin Greenberg is a writer, story editor and producer of children’s entertainment. She is a Peabody finalist and winner of three Daytime Emmys, two Annie Awards and a Writers Guild Award. She wrote a series of children's books under the name Carin Greenberg Baker.

Oliver Jeffers is a Northern Irish artist, illustrator and writer who now lives and works in Brooklyn. He went to the integrated secondary school Hazelwood College, then graduated from the University of Ulster in 2001.

Ursula Nordstrom was publisher and editor-in-chief of juvenile books at Harper & Row from 1940 to 1973. She is credited with presiding over a transformation in children's literature in which morality tales written for adult approval gave way to works that instead appealed to children's imaginations and emotions.

Weston Woods Studios is a production company that makes audio and short films based on well-known books for children. It was founded in 1953 by Morton Schindel in Weston, Connecticut, and named after the wooded area near his home. The company's first project was Andy and the Lion in 1954, and its first animated film was The Snowy Day in 1964. Starting in 1968, Weston Woods began a long collaboration with animator Gene Deitch and opened international offices in Henley-on-Thames, England, UK, in 1972; Canada in 1975; and Australia in 1977. In addition to making the films, the company also conducted interviews with the writers, illustrators, and makers of the films. The films appeared on children's television programs such as Captain Kangaroo, Pinwheel, The Great Space Coaster, Lunchbox, Eureeka's Castle, and Mister Moose's Fun Time. In the mid-1980s, the films were released on VHS under the Children's Circle titles, and Wood Knapp Video distributed these releases from 1988 to 1995. 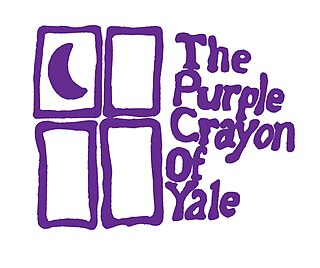 The Purple Crayon of Yale, or the Purple Crayon, is an improvisational theater group at Yale University in New Haven, Connecticut, United States. The group specializes in longform improv, such as the Harold. The Purple Crayon is Yale's second-oldest improv group, after the Ex!t Players, and the oldest collegiate longform group in the country.

Dallas Clayton is an American author and illustrator best known for his children's works in the Awesome Book series.

Hilda is an American-British-Canadian animated urban fantasy comedy-drama streaming television series based on the graphic novel series of the same name by Luke Pearson. Produced by Silvergate Media and Mercury Filmworks, the series follows the adventures of fearless Hilda, a young blue-haired girl who, along with her deerfox Twig, moves to the city of Trolberg, where she befriends even the most dangerous monsters.

Pablo is a British children's television series that premiered on CBeebies on 2 October 2017. It was created by Grainne McGuinness. The series follows the adventures of Pablo, a five year old autistic boy, and his imaginary anthropomorphized animal friends, the Book Animals, who go on adventures in Pablo's 'Art World'. It is a hybrid of live action sequences and 2D animation. The series features a voice cast and writing team who are all autistic.

Hair Love is a 2019 American animated short film directed by Matthew A. Cherry, Everett Downing Jr., and Bruce W. Smith, and written by Cherry. It follows the story of a man who must do his daughter's hair for the first time, and it features Issa Rae as a voice of the mother. The film was produced after a 2017 Kickstarter campaign, and it was also released as a children's book in May 2019 with illustrations by Vashti Harrison. Hair Love received generally positive reviews and won Best Animated Short Film at the 92nd Academy Awards. The short was ordered to a series titled Young Love by HBO Max in July 2020.