Dennis Miller Live was a weekly talk show on HBO, hosted by comedian Dennis Miller. The show ran 215 episodes from 1994 [1] to 2002, [2] and received five Emmy awards and 11 Emmy nominations. [3] It was also nominated six times for the Writers Guild of America Award for "Best Writing For A Comedy/Variety Series", and won three of those six times.

The show was idea of HBO executive producer Michael Fuchs, who told Miller he could use any forum he wanted as long as he brought in the numbers. It was directed by Debbie Palacio for most of its run, and head writers were first Jeff Cesario and then Eddie Feldmann. Other writers included José Arroyo, Rich Dahm, Ed Driscoll, David Feldman, Mike Gandolfi, Jim Hanna, Tom Hertz, Leah Krinsky, Rob Kutner, Rick Overton, Jacob Sager Weinstein, and David S. Weiss.

The show was mainly characterized by its simplicity. The show had a small set, no house band, and limited lighting. It mainly consisted of Miller speaking to the largely unseen studio audience on a darkened stage.

The show's cold opening started with Miller doing a brief joke about a current event. The credit sequence showed Miller in a pool hall playing by himself set to "Everybody Wants to Rule the World" by Tears for Fears. In later seasons, the sequence was changed to show oversized toppling dominoes featuring images of political and social leaders. The final domino falls in front of Miller who walks away while an overhead shot shows the dominoes spelling out the word "LIVE". In the ninth and final season, the opening was very brief. It consisted only of a close-up of a monitor with the title of the show on it. A new original theme played as Miller immediately walked on stage to start the show.

Then Miller would perform a two-part monologue. The first part being the usual jokes about current events typical of late-night talk shows. This would then segue directly into a stream-of-consciousness diatribe that became Miller's trademark. This second part of monologue always began with the catchphrase "Now I don't want to get off on a rant here..." and ended with the phrase "Of course, that's just my opinion, I could be wrong." A series of books that compiled transcripts of these monologues were released during the run of the show, starting with 1996's The Rants to 2002's The Rant Zone.

Miller would discuss the topic of the day with one guest per show. During the first season, some guests were interviewed by satellite. During the guest segment, the show would also take phone calls. The call-in number was originally given as 1-800-LACTOSE. Reportedly, Miller chose the word "lactose" because it was the only word he could make with seven digits to make it a vanity number. But starting in the 1997 season, he stopped using the word and simply gave the corresponding numbers.

At the end of the interview, Miller would tell the guest "Stick around, I've gotta go do the news", at which time he would step next to a monitor named "The Big Screen". Black-and-white photographs from newspapers would be shown, and Miller would make humorous captions regarding them. At the finish of this segment, Miller would harken back to his SNL days by saying "That's the news, and I am outta here!" 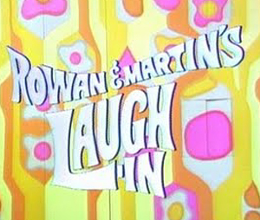 Rowan & Martin's Laugh-In is an American sketch comedy television program that ran for 140 episodes from January 22, 1968, to March 12, 1973, on the NBC television network, hosted by comedians Dan Rowan and Dick Martin. It originally aired as a one-time special on September 9, 1967, and was such a success that it was brought back as a series, replacing The Man from U.N.C.L.E. on Mondays at 8 pm (ET). It quickly became the most popular television show in the United States.

Jimmy Kimmel Live! is an American late-night talk show, created and hosted by Jimmy Kimmel, broadcast on ABC. The nightly hour-long show made its debut on January 26, 2003 at Hollywood Masonic Temple in Hollywood, California as part of ABC's lead-out programming for Super Bowl XXXVII. Jimmy Kimmel Live! is produced by Kimmelot in association with ABC Signature. Having aired for more than three times as long as either The Dick Cavett Show (1969–1975) or Politically Incorrect (1997–2002), it is the longest running late-night talk show on the network.

Weekend Update is a Saturday Night Live sketch and fictional news program that comments on and parodies current events. It is the show's longest-running recurring sketch, having been on since the show's first broadcast, and is typically presented in the middle of the show immediately after the first musical performance. One or two of the players are cast in the role of news anchor, presenting gag news items based on current events and acting as hosts for occasional editorials, commentaries, or other performances by other cast members or guests. Chevy Chase has said that Weekend Update – which he started as anchor in 1975 – paved the way for comedic news shows like The Daily Show and The Colbert Report. 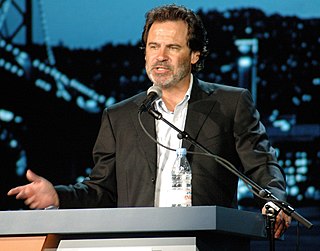 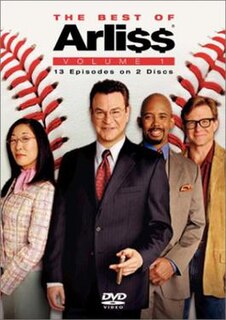 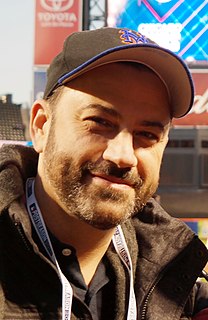 James Christian Kimmel is an American television host, comedian, writer, and producer. He is the host and executive producer of Jimmy Kimmel Live!, a late-night talk show that premiered on ABC on January 26, 2003, at Hollywood Masonic Temple in Hollywood, California; and on April 1, 2019, at a secondary home, the Zappos Theater on the Las Vegas Strip. Kimmel hosted the Primetime Emmy Awards in 2012, 2016 and 2020, and the Academy Awards in 2017 and 2018.

Gilbert Jeremy Gottfried is an American actor and stand-up comedian. Gottfried's persona as a comedian features an exaggerated shrill voice and emphasis on crude humor. His numerous roles in film and television include voicing the parrot Iago in Disney's Aladdin animated films and TV show, Digit LeBoid in the PBS Kids Go! show Cyberchase, and Kraang Subprime in Teenage Mutant Ninja Turtles. Gottfried was also the voice of the Aflac Duck until 2011. He appeared in the critically panned commercial hit Problem Child in 1990. James Woodward Downey is an American comedy writer and occasional actor. Downey has written for over 30 seasons of Saturday Night Live. This makes him the longest associated writer with the show. He has also been called the "best political humorist alive".

Norman Gene Macdonald is a Canadian stand-up comedian, writer, and actor, known for his deadpan style. Early in his career, he wrote for the sitcom Roseanne, and made guest appearances on shows such as The Drew Carey Show and NewsRadio. Macdonald was then a cast member on Saturday Night Live (SNL) for five years, including anchoring the Weekend Update segment for three seasons. After leaving SNL, he starred in the 1998 film Dirty Work and in his own sitcom, The Norm Show, from 1999 to 2001.

The 58th Primetime Emmy Awards were held on Sunday, August 27, 2006, at the Shrine Auditorium in Los Angeles, California on NBC at 8:00 p.m. ET with Conan O'Brien hosting the show. The ceremony attracted 16.2 million viewers, 2.5 million fewer than the previous year's ceremony, but still the ratings winner for the week. The Discovery Channel received its first major nomination this year. 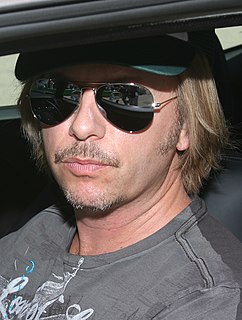 The Dennis Miller Show is an American syndicated late-night talk show created by and starring comedian Dennis Miller. The show launched in January 1992 and was hosted by the former Saturday Night Live Weekend Update anchor as an attempt by syndicator Tribune Entertainment to carve out a niche in the late-night television landscape; an opportunity to do so was anticipated due to Johnny Carson's retirement from The Tonight Show that May and his replacement by Jay Leno. Miller's show was unable to build a significant audience, however, and was cancelled after seven months.

Rick Mercer Report is a Canadian television comedy series which aired on CBC Television from 2004 to 2018. Launched in 2004, as Rick Mercer's Monday Report, or simply Monday Report, by comedian Rick Mercer, the weekly half-hour show combined news parody, sketch comedy, visits to interesting places across Canada, and satirical editorials, often involving Canadian politics. The show's format was similar in some respects to satirical news shows like Mercer's prior series, This Hour Has 22 Minutes.

Late Night with Seth Meyers is an American late-night and news satire talk show hosted by Seth Meyers on NBC. The show premiered on February 24, 2014, and is produced by Broadway Video and Universal Television. Airing weeknights at 12:37 a.m. ET/PT, it is the fourth iteration of NBC's Late Night franchise. The show also stars bandleader Fred Armisen and the 8G Band, the show's house band. Late Night is produced by former Saturday Night Live producer Mike Shoemaker and executive-produced by Lorne Michaels. The show records from Studio 8G at 30 Rockefeller Plaza in New York City. Clips of Late Night are provided on YouTube. 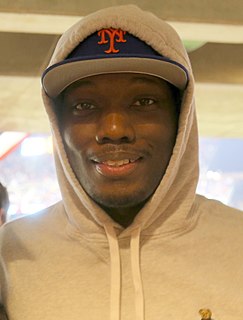 Michael Che Campbell is an American stand-up comedian, actor, and writer. He is best known for his work on Saturday Night Live, where he serves as co-anchor on Weekend Update and co-head writer. Che and Colin Jost were named co-hosts of the 70th Primetime Emmy Awards.

The forty-fifth season of the NBC comedy series Saturday Night Live premiered on September 28, 2019, during the 2019–20 television season with host Woody Harrelson and musical guest Billie Eilish, and concluded on May 9, 2020 with host Kristen Wiig and musical guest Boyz II Men featuring Babyface. This season featured the return of Eddie Murphy as host, on December 21, 2019, for the first time in 35 years.