Buxton is an unincorporated community and census-designated place (CDP) on Hatteras Island (part of the Outer Banks) near Cape Hatteras. It is located in Dare County in the U.S. state of North Carolina. As of the 2010 census, it had a population of 1,273. [2] Located at the widest part of Hatteras Island, it is the largest community on Hatteras Island both in terms of area and population, and is home to the island's schools and other major public buildings and offices.

North Carolina Highway 12 links the community to other Outer Banks communities such as Avon, Frisco, and Hatteras. Buxton is most famous for being the location of Cape Hatteras Light and of the accompanied beaches; it is also the home of the Cape Hatteras Anglers Club.

The residents of Buxton are governed by the Dare County Board of Commissioners. Buxton is part of District 4, along with Avon, Frisco, Hatteras, Rodanthe, Waves and Salvo.

In addition to Cape Hatteras Light, the SS Lancing shipwreck was listed on the National Register of Historic Places in 2013. [3]

Watersports are common on both the Pamlico Sound side and the Atlantic Ocean side of the community. Proximity to the convergence of the Labrador Current and the Gulf Stream result in the largest surf available [ citation needed ] on the East Coast. On the protected soundside of the island, watersports such as windsurfing, kayaking, kiteboarding, and swimming are all readily available and accessible.

On May 21, 1942, the body of a British seaman, unidentifiable but presumed to be from the HMT Bedfordshire, sunk by a German U-boat, washed ashore. The month prior, a British sailor from the sunken merchant ship San Delfino had been buried in Buxton. The Bedfordshire seaman was interred in an adjacent plot, resulting in a British Cemetery, formally known as Cape Hatteras Coast Guard Burial Ground. [6]

According to the Trewartha climate classification system, Buxton, North Carolina has a humid subtropical climate with hot and humid summers, cool winters and year-around precipitation (Cfak). Cfak climates are characterized by all months having an average mean temperature > 32.0 °F (> 0.0 °C), at least eight months with an average mean temperature ≥ 50.0 °F (≥ 10.0 °C), at least one month with an average mean temperature ≥ 71.6 °F (≥ 22.0 °C) and no significant precipitation difference between seasons. During the summer months in Buxton, a cooling afternoon sea breeze is present on most days, but episodes of extreme heat and humidity can occur with heat index values ≥ 100 °F (≥ 38 °C). Buxton is prone to hurricane strikes, particularly during the Atlantic hurricane season which extends from June 1 through November 30, sharply peaking from late August through September. During the winter months, episodes of cold and wind can occur with wind chill values < 15 °F (< -9 °C). The plant hardiness zone in Buxton is 8b with an average annual extreme minimum air temperature of 19.3 °F (-7.1 °C). [7] The average seasonal (Dec-Mar) snowfall total is < 2 inches (< 5 cm), and the average annual peak in nor'easter activity is in February.

Kitty Hawk is a town in Dare County, North Carolina, and is a part of what is known as North Carolina's Outer Banks. The population was 3,272 at the 2010 Census. It was established in the early 18th century as Chickahawk.

Nags Head is a town in Dare County, North Carolina, United States. It is a busy vacation spot because of its beaches and sand dunes of Jockey's Ridge. The population was 2,757 at the 2010 census. 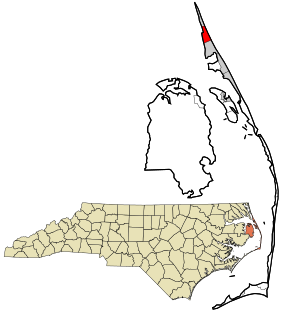 Southern Shores is a town in Dare County, North Carolina, United States. It is located on the Outer Banks and the population was 2,714 at the 2010 census. 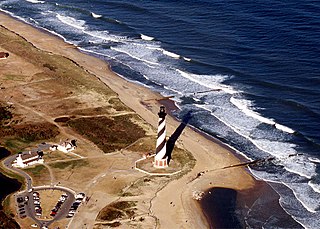 Cape Lookout National Seashore preserves a 56-mile (90-km) long section of the Southern Outer Banks, or Crystal Coast, of North Carolina, USA, running from Ocracoke Inlet on the northeast to Beaufort Inlet on the southeast. Three undeveloped barrier islands make up the seashore - North and South Core Banks and Shackleford Banks. The seashore includes two historic villages on Core Banks, Shackleford's wild horses, and the Cape Lookout Lighthouse, which has a black-and-white diamond pattern. A visitor center for the seashore is located on Harkers Island.

Avon is an unincorporated community and census-designated place (CDP) in Dare County in the U.S. state of North Carolina. As of the 2010 census, it had a permanent population of 776. 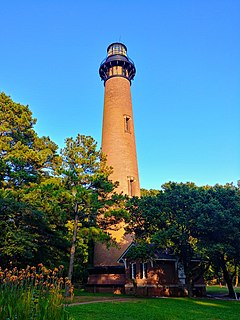 Corolla is an unincorporated community located in Poplar Branch township, Currituck County, North Carolina along the northern Outer Banks. It has a permanent population of approximately 500 people; during the summer vacation season, the population surges into the thousands. Corolla is home to the Currituck Beach Light, one of the seven North Carolina coastal lighthouses. 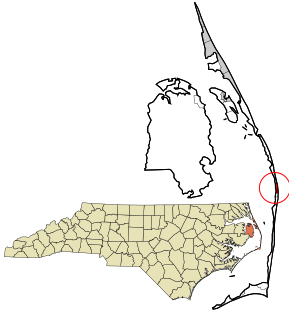 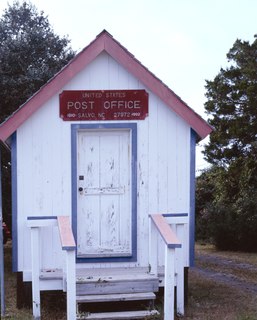 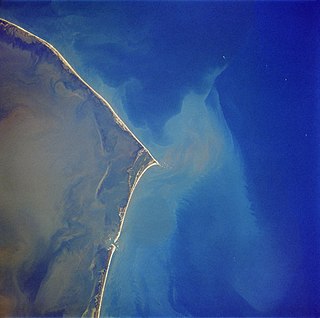 Hatteras Island is a barrier island located off the North Carolina coast. Dividing the Atlantic Ocean and the Pamlico Sound, it runs parallel to the coast, forming a bend at Cape Hatteras. It is part of North Carolina's Outer Banks and includes the communities of Rodanthe, Waves, Salvo, Avon, Buxton, Frisco, and Hatteras. It contains the largest part of the Cape Hatteras National Seashore. It is almost entirely in Dare County, North Carolina, though there is a small sliver of about 45 acres (0.18 km2) extending southwest into Hyde County. Settled by Croatoan indigenous peoples, the island was also home to one of the earliest settlements in the Americas by the English, the Roanoke Colony. 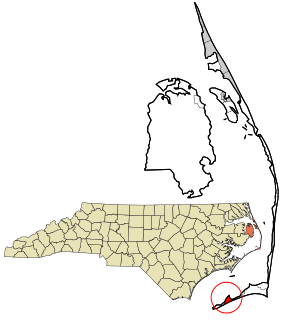 Hatteras is an unincorporated village and census-designated place (CDP) in Dare County, North Carolina, United States, on the Outer Banks island of Hatteras, at its extreme southwestern tip. As of the 2010 census it had a population of 504. Immediately to the west of the village of Hatteras is Hatteras Inlet which separates Hatteras Island from the neighboring Ocracoke Island. North Carolina Highway 12 passes through the community linking it to Frisco to the east and Ocracoke to the west. 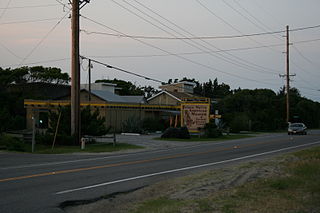 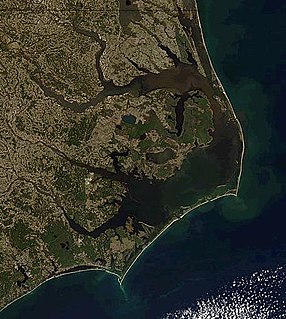 Cape Lookout is the southern point of the Core Banks, one of the natural barrier islands on the Atlantic coast of North Carolina. It delimits Onslow Bay to the west from Raleigh Bay to the east. Core Banks and Shackleford Banks have been designated as parts of the Cape Lookout National Seashore. 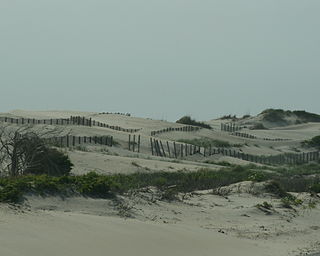 Carova Beach or Carova is an unincorporated community in Currituck County in the extreme northeast corner of North Carolina, United States. The community, begun in the 1960s, is found on Currituck Banks, north of Bodie Island, and can only be accessed by boat or by four-wheel drive vehicle. There are no paved roads connecting Carova to the town of Corolla, North Carolina. The neighboring settlement of Sandbridge in Virginia Beach, Virginia is not accessible by vehicle from Carova. In the 1960s when development began in Carova there were plans to construct a paved road from Sandbridge south to Carova through the Back Bay National Wildlife Refuge but these never materialized. Today there is a permanent fence from ocean to sound to keep vehicles from crossing but, more importantly, to keep the wild horses from migrating to the Virginia side of the border. To reach Carova, four-wheel drive vehicles must drive north along the beach from Corolla into the community, as access from Virginia is limited to pedestrians and bicyclists.

The Core Banks are barrier islands in North Carolina, part of the Outer Banks and Cape Lookout National Seashore. Named after the Coree tribe, they extend from Ocracoke Inlet to Cape Lookout, and consist of two low-relief narrow islands, North Core Banks and South Core Banks, and, since September 2011, two smaller islands. New Drum Inlet, Old Drum Inlet and Ophelia Inlet now separate the islands. The Core Banks are now uninhabited. However, Portsmouth, at the north end of the North Core Banks, was once a substantial port, and Cape Lookout Village, about one and half miles south of the Cape Lookout Lighthouse, contains the historic Lookout Life-Saving Station, a U.S. Coast Guard Station, and several island homes.