The community now known as Chase was founded as "Chase's Station" in 1850 as a stop for the Baltimore Railroad. Following the Civil War, Chase became populated by freed African American slaves, who established farms and residences along Eastern Avenue Extended. [2] Founded later in the nineteenth century, the community of Bengies was similarly established as a rural African American community west of Chase along Eastern Avenue Extended. [3] Eventually the two communities grew together and became known as Bengies-Chase, or simply Chase. From its inception until the mid-twentieth century, the primary employers were the Baltimore Railroad and local farms. Chase remained a primarily African American rural community until the mid-twentieth century, when Chase began to be used as a suburb of Baltimore City.

From 1949 to 1969, the United States Army used Carroll Island (a large island near Chase), and Graces Quarters (a large peninsula between the Dundee Creek and Gunpowder River) to test and dispose of chemical weapons, including: VX (nerve agent), sarin, mustard gas, incapacitating agents, and other lethal agents. These areas were considered to be a part of Aberdeen Proving Grounds and were the only part of Aberdeen Proving Grounds within Baltimore County. The chemicals at these sites were dumped in open pits, with no precautions taken against groundwater contamination and few records kept of exactly what was dumped where. [4] In the 1980s, groundwater testing revealed contamination, and on February 21, 1990, the area was listed as one of Superfund's "most serious uncontrolled or abandoned hazardous waste sites." [5] Some cleanup was completed in the 1990s but most remains unfinished. These sites remain off-limits to the public and undeveloped due to extreme contamination.

In the 1970s, WGU-20, a longwave radio station, was established by the Defense Civil Preparedness Agency (now the Federal Emergency Management Agency (FEMA)) near the Graces Quarters chemical weapons site. The purpose of the station was to alert the entire Eastern seaboard in the event of an enemy attack.

In the 1980s, Chase became a part of the zip code 21220 after a new, larger post office was built in Middle River to serve the entire area. The old zip code (21027) and post office remain for the purpose of P.O. boxes.

On January 4, 1987, Amtrak Train 94 crashed into a Conrail freight locomotive in Chase. The Conrail engineer had been smoking marijuana, which caused him to miss numerous warning signals. Fourteen passengers were killed, making this Amtrak's deadliest crash ever at the time. The crash became national news and led to new safety regulations and drug testing in the railroad industry. The crash also caught the attention of President Ronald Reagan, who honored some of the local people of Chase for helping passengers who escaped shaken but unharmed from the trains.

On March 7, 2000, Joseph Palczynski murdered three people in an apartment complex in nearby Bowleys Quarters. The next day he murdered a fourth victim in Chase. Palczynski was raised in Chase, and being an outdoorsman was very familiar with the wooded areas surrounding the community. Thus, from March 7 to March 17 he sent the entire area into lock-down by hiding in the woods, evading police. He was finally killed by police on March 21 after a standoff in Dundalk.

Since the 1990s, efforts have been underway to revitalize Chase similar to those taking place in Essex and Middle River. These efforts have included the razing of half of the Tidewater Village (now Whispering Woods) apartment complex in the late-1990s, the opening of the MD 43 extension in 2006, and the addition of sidewalks along Eastern Avenue in 2007.

Arnold is a suburb of Annapolis and a census-designated place (CDP) in Anne Arundel County, Maryland, United States. The population was 23,106 at the 2010 census. Neighborhoods straddle College Parkway and Maryland Route 2. Arnold is located on the scenic Broadneck peninsula. The ZIP code is 21012.

Bowleys Quarters is an unincorporated community and census-designated place in Baltimore County, Maryland, United States, with a population of 6,755 at the 2010 census.

Essex is an unincorporated community and census-designated place in Baltimore County, Maryland, United States. The population was 39,262 at the 2010 census.

Middle River is an unincorporated community and census-designated place in Baltimore County, Maryland, United States. The population was 25,191 at the 2010 census. A Middle River Train Station first appeared on the 1877 G.M. Hopkins & Co Baltimore County Map and by 1898 had a designated Post Office and modest street grid. The town expanded during the 1930s and 1940s and established the "Aero Acres" housing community which borders the railroad tracks and Martin Blvd. to serve as housing for people working at the Martin Aerospace Company. 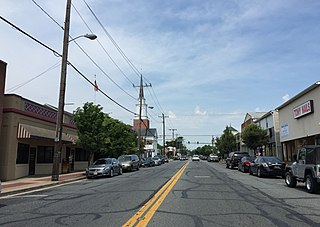 Aberdeen Proving Ground (APG) is a United States Army facility located adjacent to Aberdeen, Harford County, Maryland. Part of the facility is a census-designated place (CDP), which had a population of 3,116 at the 2000 census, and 2,093 at the 2010 census. There are 11 major commands among the tenant units, including

The United States federal Superfund law is officially known as the Comprehensive Environmental Response, Compensation, and Liability Act of 1980 (CERCLA). The federal Superfund program, administered by the U.S. Environmental Protection Agency (EPA) is designed to investigate and clean up sites contaminated with hazardous substances. Sites managed under this program are referred to as "Superfund" sites. There are 40,000 federal Superfund sites across the country, and approximately 1,600 of those sites have been listed on the National Priorities List (NPL). Sites on the NPL are considered the most highly contaminated and undergo longer-term remedial investigation and remedial action (cleanups).

The Henry Hudson Trail is a rail trail in Monmouth County, New Jersey. The trail is named for Henry Hudson, who explored the harbor at Atlantic Highlands and the Raritan Bayshore coastline in the early 1600s. The trail is not near the Hudson River.

The Gunpowder River is a 6.8-mile-long (10.9 km) tidal inlet on the western side of Chesapeake Bay in Maryland, United States. It is formed by the joining of two freshwater rivers, Gunpowder Falls and Little Gunpowder Falls.

Lansdowne is a census-designated place in southern Baltimore County, Maryland, just south of Baltimore city. As of the 2010 census, it had a population of 8,409. At the 2000 census and earlier, the area was delineated as part of the Lansdowne-Baltimore Highlands CDP.

The 1987 Maryland train collision occurred at 1:30 pm on January 4, 1987, on Amtrak's Northeast Corridor main line. The site of the crash was in the Chase community in eastern Baltimore County, Maryland, United States, at Gunpowder Interlocking, about 18 miles (29 km) northeast of Baltimore. Amtrak train 94, the Colonial, traveling north from Washington, D.C., to Boston, crashed into a set of Conrail locomotives running light, and which had fouled (entered) the mainline. Train 94's speed at the time of the collision was estimated at about 108 miles per hour (174 km/h). Fourteen passengers on the Amtrak train were killed, as well as the Amtrak engineer and lounge car attendant.

Maryland Route 150 (MD 150) is a state highway in the U.S. state of Maryland. Known for most of its length as either Eastern Avenue or Eastern Boulevard, the highway runs 13.01 miles (20.94 km) from U.S. Route 40 (US 40) in Baltimore east to Graces Quarters Road in Chase in eastern Baltimore County. MD 150 connects Baltimore with its southeastern suburbs of Dundalk, Essex, and Middle River. The state highway also links those communities with Interstate 95, I-695, I-895, and Martin State Airport. MD 150 was constructed from Baltimore to Middle River and in Chase in the mid-1920s. The road was completed through Middle River in the early 1930s. Between 1942 and 1944, MD 150 was reconstructed as a four-lane divided highway with interchanges to improve access between Baltimore and the Glenn L. Martin Company aircraft manufacturing plant in Middle River. The highway has followed several routes since it was extended west into the city of Baltimore in the mid-1940s; the present route in East Baltimore was established shortly after 2000.

WGU-20, also known as "the last radio station," was operated by the United States Defense Civil Preparedness Agency in the mid-to-late 1970s.

Carroll Crest is an unincorporated community located in Middle River, Baltimore County, Maryland, United States. This community contains 233 houses secluded in a wooded area and was developed in two phases during the 1980s by Security Management. One of the roads leading into the community is Keeners Road. For years prior to the development of the community, it was known as Ghost Road and had been the supposed site of several supernatural occurrences. District 6 is the current legislative apportionment that includes Carroll Crest. Seneca Elementary and Chase Elementary are the local schools.

Joseph Chester "Joe" Palczynski was a spree killer in the suburbs of Baltimore who in March 2000 killed four people and held a family of three as hostages in nearly a four-day standoff, one of the longest known conducted by one man.

In 1990, the Allied Paper, Inc./Portage Creek/Kalamazoo River in southwestern Michigan was declared by the Environmental Protection Agency (EPA) to be a Superfund site – in other words, an abandoned industrial site containing significant amounts of toxic waste. The EPA and companies responsible for the waste in this area, which includes a three-mile section of Portage Creek as well as part of the Kalamazoo River, into which it flows, are currently involved in an effort to reduce the amount of toxic waste at the site, which is contaminated by PCBs from paper mills and other factories.

LocalLink 59 is a bus route operated by the Maryland Transit Administration in Baltimore and its suburbs. The line operates hourly between the Moravia loop in Northeast Baltimore and Whispering Woods, just east of Bowleys Quarters.

Bush River is a tidal estuary in Harford County, Maryland, located about 15 mi (24 km) northeast of Baltimore. The estuary extends from the community of Riverside, south for about 9 mi (14 km), to the Chesapeake Bay. The watershed area of tidal Bush River is 125 mi2 (320 km2), and includes Aberdeen Proving Ground, a military facility.