Fairbridge, Western Australia is a former farm school near Pinjarra in south west Western Australia. It is now used predominantly for education, school and community camps and tourism purposes.

On 15 April 1912, Kingsley Fairbridge and his wife Ruby Fairbridge arrived in Albany, Western Australia, from England and made their way to Pinjarra, arriving on 16 July that same year to establish the world's first Fairbridge Farm School. [1] The school opened on 19 October 1912. Kingsley wanted to see "little children shedding the bondage of bitter circumstances and stretching their legs and minds amid the thousand interests of the farm." [2]

From 1913 until 1982, Fairbridge Farm School was home to a total of 3,580 children [3] who came to Fairbridge under various child migration schemes. The school provided education in task-learning, husbandry, metal work and wood work. During World War II, Dutch refugee children evacuated from Indonesia were based at Fairbridge while waiting to be reunited with their families. During the same period, the site was also used as a training ground for the Women's Land Army, and Guildford Grammar School partially relocated there while their school was used as a hospital base. [4] An airfield was constructed and operated from the school during the Second World War until the 1950s.

On 24 February 2010, United Kingdom (UK) Prime Minister Gordon Brown made a formal apology to the families of children who suffered. [8] [9] On 31 January 2019, the UK Government announced that following the Independent Inquiry into Child Sexual Abuse, which handed down its report in May 2018, the UK Government would make an ex-gratia payment of GB£20,000 to any former British child migrant who was alive on 1 March 2018, or if alive as at that date and since deceased, the payment would be made to the deceased's beneficiaries. [10]

In July 2020, it was reported that the Australian Government had named Fairbridge Restored Limited as one of six institutions that had failed to sign up for the National Redress Scheme by the June 30 deadline. [11] In November 2020, The Guardian reported that Fairbridge Restored Limited was dormant and under administration, and that the administrator, Chris Laverty, had claimed that insolvency law in the UK meant Fairbridge was unable to comply with the redress scheme criteria. [12]

The chapel is the only building in Australia designed, and with construction overseen by noted British architect Sir Herbert Baker. Described as "the architectural jewel in the crown" of Fairbridge Village, the chapel was built in 1930–31 by the Western Australian Government with construction funded by British interests. [14]

Fairbridge Western Australia Inc. was established as a charity in 1983 and owns and operates Fairbridge Village. The organisation runs programs and services for young people including an independent school, registered training organisation, school and community camps. Fairbridge work closely with local employee Alcoa providing traineeships to youth from the local community.

As a not for profit organisation all surplus funds are invested to provide opportunities for youth.

The 30-hectare (74-acre) Village is run as a training facility for young people and as a tourist destination providing visitors with accommodation, catering and activities in its historic surroundings. It is the only Fairbridge Farm School site remaining out of the eight that were originally built around the world.

Fairbridge offers historical tours and activities. It has a number of buildings which are used as conference and function venues and a coffee shop featuring local artworks.

Fairbridge Village consists of 55 heritage listed buildings and ten newer buildings. [15] The Village also has a chapel, dining hall, single and double storey cottages, training and sporting facilities. Accommodation can hold 370 people. There are 23 different self-contained cottages that sleep from 2 to 56 people.

The Scheyville National Park is a protected national park that is located in the northwestern suburbs of Sydney in New South Wales, in eastern Australia. The 920-hectare (2,300-acre) national park is situated approximately 40 kilometres (25 mi) northwest of the Sydney central business district, northeast of Windsor, near the settlement of Scheyville. Longneck Lagoon lies in the northern section of the park. It was added to the New South Wales State Heritage Register on 9 April 2010.

Home Children was the child migration scheme founded by Annie MacPherson in 1869, under which more than 100,000 children were sent from the United Kingdom to Australia, Canada, New Zealand, and South Africa. The programme was largely discontinued in the 1930s, but not entirely terminated until the 1970s.

Sir Herbert Baker was an English architect remembered as the dominant force in South African architecture for two decades, and a major designer of some of New Delhi's most notable government structures. He was born and died at Owletts in Cobham, Kent.

Bindoon is a town 84 kilometres (52 mi) from Perth city on the Great Northern Highway within the Shire of Chittering. The name Bindoon is thought to be Aboriginal in origin and to mean "place where the yams grow". The name has been in use in the area since 1843 when an early settler, William Brockman, named the property he had surveyed as Bindoon. The townsite was gazetted in 1953.

David Hill is an English-born Australian business leader and author.

Margaret Humphreys, is a British social worker and author from Nottingham, England. She worked for Nottinghamshire County Council operating around Radford, Nottingham and Hyson Green in child protection and adoption services. In 1986 she received a letter from a woman in Australia who, believing she was an orphan, was looking to locate her birth certificate so she could get married.

Post-war immigration to Australia deals with migration to Australia in the decades immediately following World War II, and in particular refers to the predominately European wave of immigration which occurred between 1945 and the end of the White Australia policy in 1973. In the immediate aftermath of World War II, Ben Chifley, Prime Minister of Australia (1945–1949), established the federal Department of Immigration to administer a large-scale immigration program. Chifley commissioned a report on the subject which found that Australia was in urgent need of a larger population for the purposes of defence and development and it recommended a 1% annual increase in population through increased immigration.

Fairbridge may refer to: 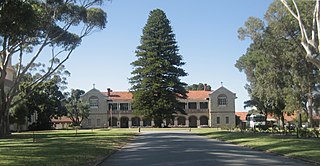 Clontarf Aboriginal College is a co-educational Aboriginal college for indigenous youth aged between 15 and 18 years, located in the Perth suburb of Waterford in Western Australia. Since 2000 the college has also been the centre for the Clontarf Football Academy run by the Clontarf Foundation a program of Australian rules football for indigenous youth.

Tardun is a small town in the Mid West region of Western Australia. 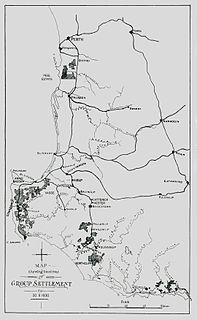 The Group Settlement Scheme was an assisted migration scheme which operated in Western Australia from the early 1920s. It was engineered by Premier James Mitchell and followed on from the Soldier Settlement Scheme immediately after World War I. Targeting civilians and others who were otherwise ineligible for the Soldiers' scheme, its principal purpose was to provide a labour force to open up the large tracts of potential agricultural land to ultimately reduce dependence on food imports from interstate. It was also seen by Australians as boosting the ideals of the White Australia policy by strengthening the Anglo-Australian cultural identity of Australia. High levels of post-war unemployment in Britain saw the UK Government seizing on the scheme as a way to reduce dole-queues. Over 6,000 people emigrated to Western Australia under the scheme which was funded jointly by the State, Federal and UK Governments.

Forgotten Australians is a contested term applied by some to the estimated 500,000 children and child migrants who experienced care in institutions or outside a home setting in Australia during the 20th century. The Australian Senate used the term specifically when reporting on its 2003–2004 "Inquiry into Children in Institutional Care". 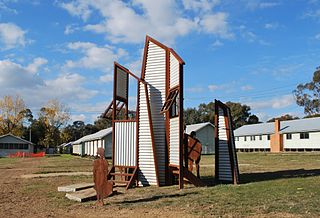 The Bonegilla Migrant Reception and Training Centre was a camp set up for receiving and training migrants to Australia during the post World War II immigration boom. The camp was set on 130 hectares near Wodonga at the locality of Bonegilla in north east Victoria, between the Hume Dam and the city of Wodonga. The site was a former World War II Australian Army base, and is adjacent to the current Latchford Barracks. Before being requisitioned by the army, the site was originally a section of large pastoral land. The camp opened in 1947 and operated until 1971, over which period it received over 300,000 migrants. It is estimated that over 1.5 million Australians are descended from migrants who spent time at Bonegilla. Eric Bana's parents were both processed through Bonegilla. Other former residents include Karl Kruszelnicki, Franca Arena, Arvi Parbo, Les Murray, Susan Duncan and Raimond Gaita. 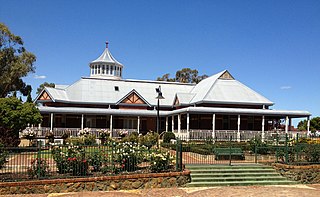 Castledare Boys' Home was a residential college in Wilson, Western Australia owned and operated by the Congregation of Christian Brothers from March 1929 to 1983 and established for the treatment and training of intellectually handicapped children. A 1929 newspaper article announcing the opening described it as a "training school for sub-normal boys". It opened with ten boys and under the directorship of Brother G. Hyland. The state psychologist, Ethel Stoneham, travelled to Europe and the United States to study similar institutions and was influential in the design of the home.

The Long Journey Home is an Australian TV documentary in which former child migrants relate their generally unhappy experiences as inmates of a Fairbridge school establishment at Molong, New South Wales. The script is largely based on an autobiographical book by David Hill, published in 2007. The documentary first went to air on ABC Television in November 2009, with Hill as one of the presenters. It included his report of allegations made by three former residents that the former distinguished governor-general Sir William Slim had sexually assaulted them and other young boys during visits to the Fairbridge farms.

The Benalla Migrant Camp, formally known as the Benalla Holding Centre and the Benalla Migrant Accommodation Centre, was one of 23 similar camps established by the Australian government to provide temporary housing for non-British new arrivals in post-World War II Australia. The Camp occupied the former Royal Australian Air Force (RAAF) No.11 Elementary Flying Training School (1941-1944), adjacent to a small aerodrome on the outskirts of Benalla in north east Victoria. Opening in 1949, the Benalla Migrant Camp was a modest-sized holding centre, accommodating 200 – 400 people. It survived national reviews of migrant accommodation needs in 1953 and 1959, but by 1967, the number of residents had diminished sufficiently for the Camp to close. By that time, over 60,000 people — mainly of Polish, Latvian, Lithuanian, German and Estonian origins, as well as other nationalities — had been accommodated there.