Dwellingup is a town in Western Australia located in a timber and fruitgrowing area in the Darling Range east-south-east of Pinjarra. At the 2011 census, Dwellingup had a population of 383. [1]

Townsite lots were surveyed at this place by surveyor W.F. Rudall in 1909 after the Lands Department became aware that the site was planned as the terminus of the "Pinjarra-Marrinup Railway". Names suggested for the place by Rudall were "Dwellingerup" or "Marrinup", after nearby brooks, or "McLarty" after a local MLA who had been very active concerning the railway. Surveyor General H.F. Johnston chose "Dwellingupp" after being misinformed regarding the spelling of Dwellingerup Brook. Ignoring a suggestion from the Under Secretary to amend the name to "Dwellingdown", the Minister for Lands approved the name as "Dwellingup" in December 1909. Eventually, the spelling "Dwellingupp" was chosen by order of the Under Secretary for Lands, and the townsite was gazetted as Dwellingupp in February 1910. The spelling was amended to Dwellingup in 1915. Dwellingup is an Aboriginal name said to mean "place of nearby water" or "on and by the whole place there is fog, dew and mist". [2]

In one of Western Australia's worst bushfires, many small surrounding communities in the area were destroyed, including 132 houses in Dwellingup itself, in the fires of 1961. There were no fatalities, but 800 people were left homeless. The town was rebuilt. [3]

Dwellingup experienced serious bushfires again over the week starting on 3 February 2007. Sixteen houses were destroyed and thousand of hectares of private property and forest were burnt. There was no loss of life. [4] [5]

Dwellingup is near the one of the largest bauxite mines in the world, at Huntly, [6] which supplies ore to the Pinjarra and Kwinana aluminium refineries.

Dwellingup is home to Nanga Bush Camp, a popular camp for senior primary schools and high schools. Some of the activities at Nanga Bush Camp include water rafting, night watching, a swimming area and bush tracks. [7]

Another major attraction in the area is the Hotham Valley Railway. A Dwellingup Forest Ranger Tour operates between May and October, and is steam hauled between Pinjarra and Dwellingup. [8]

Dwellingup has a skate park and pump track. It also has the Munda Biddi Bike Trail and the Captain Fawcett 4WD Trail.[ citation needed ]

The Bibbulmun Track, a long-distance walk trail, passes through Dwellingup. [9]

Dwellingup is one of the wettest inhabited places in Western Australia, with an average annual rainfall of over 1,200 mm. [10] It has a hot-summer Mediterranean climate (Köppen climate classification: Csa). 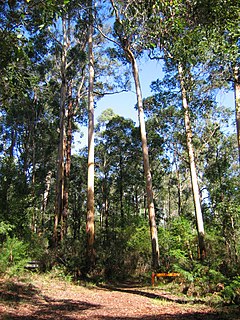 Kalamunda is a town and eastern suburb of Perth, Western Australia, located in the Darling Scarp at the eastern limits of the Perth metropolitan area. 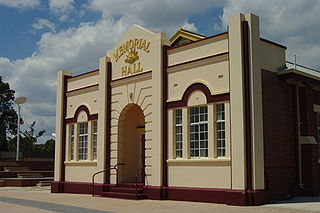 The Hotham Valley Tourist Railway is a tourist and heritage railway in the Peel region of Western Australia.

Balingup is a town in the South West of Western Australia, 241 kilometres (150 mi) south of the state capital, Perth, and 31 kilometres (19 mi) southeast of the town of Donnybrook. 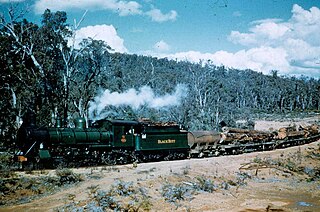 Gleneagle or Glen Eagle is a locality in Western Australia. The locality is south east of the state capital, Perth, close to Jarrahdale on the Albany Highway 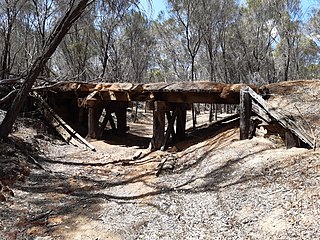 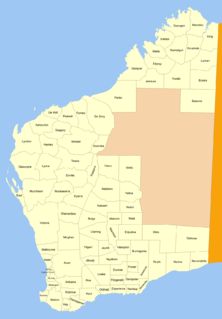 Murray Land District is a land district of Western Australia, located within the South-West Land Division on the state's west coast. It spans roughly 32°25'S - 32°56'S in latitude and 115°25'E - 116°30'E in longitude, and is located on the Indian Ocean coast, taking in the Shires of Murray and Waroona, the eastern part of the Serpentine-Jarrahdale and the western suburbs of Mandurah.