Keralup is a suburb straddling the southern boundary of the metropolitan area of Perth, Western Australia, on the eastern side of the Kwinana Freeway, and consists entirely of a government strategic landholding. The suburb will ultimately contain 90,000 people, with the majority of development being on the eastern side of the Serpentine River. [2]

The name was chosen from a newspaper poll; it was proposed by local Nyoongar leader, Trevor Walley, as it was the name of a pool in the Serpentine River in which he and his friends played as children. [3] 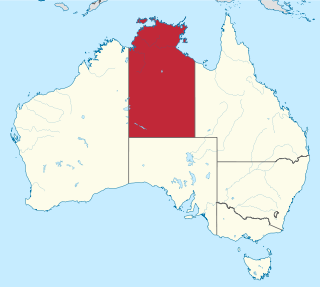 Mirrabooka is a suburb of Perth, Western Australia. Its local government area is the City of Stirling.

Rosny is a suburb of the City of Clarence, part of the greater Hobart area, Tasmania, Australia. It is located on the eastern shore of the Derwent River, between the suburbs of Montagu Bay and Rosny Park, approximately 4 kilometres from Hobart's centre. Rosny is the residential part of its commercial namesake Rosny Park.

Westonia is a small town located in the Eastern Wheatbelt region of Western Australia, 10 kilometres (6 mi) north of the Great Eastern Highway. It is the main town in the Shire of Westonia.

Serpentine is a town located 55 kilometres (34 mi) south-southeast of Perth, the capital of Western Australia, and 7 km south of Mundijong. 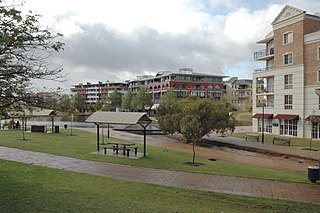 East Perth is an inner suburb of Perth, Western Australia, located next to the Perth CBD. Claise Brook and Claisebrook Cove are within the suburb. 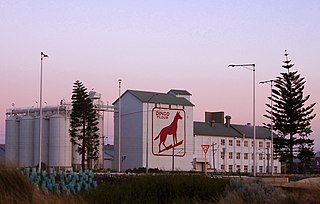 North Fremantle is a suburb of Perth, Western Australia, located within the City of Fremantle. Its postcode is 6159.

Beckenham is a suburb of Perth, Western Australia, located within the City of Gosnells. 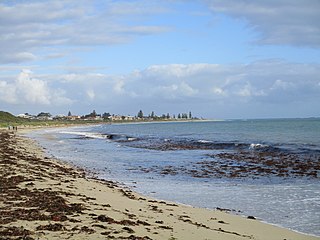 Shoalwater is an outer southern suburb of Perth, the capital city of Western Australia, located within the City of Rockingham.

Stoneville is a suburb east of Perth in the Shire of Mundaring, Western Australia. It is named after Edward Albert Stone, who was Chief Justice of Western Australia when the place was named in 1905. The name was chosen by the local residents who were developing the district for fruit growing. The town's population is 2,050, with a median age of 36 years and 7.1% of residents aged over 65. 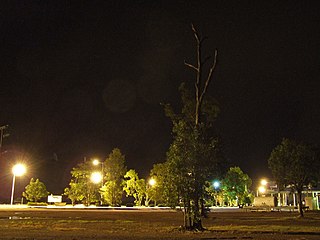 Noonamah is an outer rural suburban area of Darwin. it is 45 km SE of the Darwin CBD. Its Local Government Area is the Litchfield Municipality. The suburb is mostly a rural area, but has been experiencing strong growth in population and development. The Elizabeth River flows through Noonamah towards the East Arm of Darwin Harbour.

Wallalong is a rural suburb of the Port Stephens local government area in the Hunter Region of New South Wales, Australia. The suburb is bisected by High Street, along which a small residential zone of 938 people exists. To the east and west of this area the suburb is almost exclusively rural.

Buxton is a rural locality in the Bundaberg Region, Queensland, Australia. In the 2016 census, Buxton had a population of 430 people.

Mount Melville is a south-western suburb of Albany in southern Western Australia, west of Albany's central business district. Its local government area is the City of Albany.

Horseshoe Bend is an inner city suburb in the City of Maitland in the Hunter Region of New South Wales, Australia. It is named for the shape made by the Hunter River flowing through the area as it was observed by early European settlers. It is sometimes colloquially referred to by residents as "The Bend". One of the earliest settled areas in Maitland, it is characterised by narrow streets and laneways, as well as a mixture of architectural styles spanning the 19th and 20th centuries. The suburb was amongst the worst affected areas in the 1955 Hunter Valley floods, with the loss of many homes, leading to a decline in its popularity as a residential area. Maitland City Council planning strategies have identified Horseshoe Bend as a future growth area, outlining flood mitigation measures and evacuation plans to protect residents.