Patriots' Day (so punctuated in several U.S. states, but Patriot's Day in Maine) [2] is an annual event, formalized as several state holidays, commemorating the battles of Lexington, Concord, and Menotomy, some of the first battles of the American Revolutionary War. The holiday occurs on the third Monday of April each year, with celebrations including battle reenactments and the Boston Marathon.

In 1894, the Lexington Historical Society petitioned the Massachusetts State Legislature to proclaim April 19 as "Lexington Day". Concord countered with "Concord Day". Governor Frederic T. Greenhalge opted for a compromise: Patriots' Day. However the biggest battle fought on this day was in the town of Menotomy, now Arlington, Massachusetts. [3] Menotomy was on the Concord Road between Lexington and Concord and Boston. [4] While the fighting was going on in Lexington and Concord, 5,100 militia men arrived in Menotomy from Middlesex and Essex Counties. [4] [5] These men took up positions along the road the British troops would take on their retreat to Boston. [4] They placed themselves in and around houses, stone walls, fields and barns. The bloodiest fighting of the first day of the American Revolution took place inside a single house, the Jason Russell House, in Menotomy. [4] [6] Eleven militia men died in this house fighting British troops trained in bayonet fighting. [7]

Patriots' Day was first proclaimed in Massachusetts in 1894 by Gov. Greenhalge, replacing Fast Day as a public holiday. [2] The idea was introduced to the Governor by the statesman from Lowell, Isaac Henry Paige. It was established on April 19, commemorating the date of the Battles of Lexington and Concord and the larger Battle of Menotomy in 1775, and consolidating the longstanding municipal observances of Lexington Day and Concord Day. It also marked the first bloodshed of the American Civil War in the Baltimore riot of 1861, during which four members of the Massachusetts militia were slain and 36 injured. In Menotomy, now Arlington, [4] 25 militia men died and 40 British soldiers were killed. [8] The dual commemoration, Greenhalge explained, celebrated "the anniversary of the birth of liberty and union". It is likely that the battles that took place in Menotomy are not as well known as the smaller battles in Lexington and Concord because the town has had several names since that day in 1775. In 1938, with the generation that had fought in the Civil War largely off the voter rolls, the Massachusetts legislature passed a bill establishing the holiday "in commemoration of the opening events of the War of the Revolution". [9]

Maine followed Massachusetts in 1907 and replaced its Fast Day with Patriot's Day. [2] On June 10, 2017, Governor Dannel Malloy signed a bill establishing Patriots' Day as a statewide unpaid holiday in Connecticut. [1] On April 16, 2018 Connecticut became the 4th state to recognize the holiday. [10] [11]

The holiday was originally celebrated on April 19, the actual anniversary of the battles (fought in 1775). Since 1969, it has been observed on the third Monday in April in Massachusetts [12] and in Maine [13] (which until the Missouri Compromise of 1820 was part of Massachusetts). The Monday holiday creates a three-day long weekend. It is also the first day of a vacation week for public schools in both states and a school holiday for many local colleges and universities, both public and private.[ citation needed ]

The day is a public school observance day in Wisconsin. [14] Florida law also encourages people to celebrate it, though it is not treated as a public holiday. [15] Connecticut began observance in 2018. [1]

The most significant celebration of Patriots' Day is the Boston Marathon, which has been run every Patriots' Day since April 19, 1897 (except in 2020 and 2021) to mark the then-recently established holiday, with the race linking the Athenian and American struggles for liberty. [9] 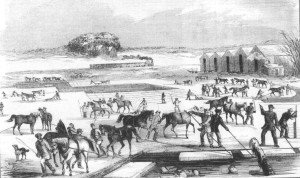 Arlington is a town in Middlesex County, Massachusetts, United States, six miles (10 km) northwest of Boston. The population was 42,844 at the 2010 census.

Fast Day was a holiday observed in some parts of the United States between 1670 and 1991. 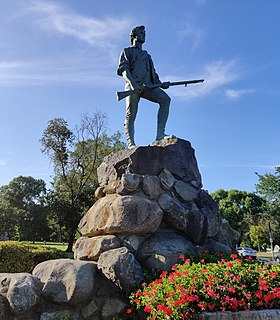 Lexington is a suburban town in Middlesex County, Massachusetts, United States. It is 10 miles (16km) from Downtown Boston. The population was 31,394 at the 2010 census, which was estimated at 33,727 in 2018. Settled in 1641 as a farming community, it is well known as the site of the first shots of the American Revolutionary War, in the Battle of Lexington on April 19, 1775. It is home to Minute Man National Historical Park. 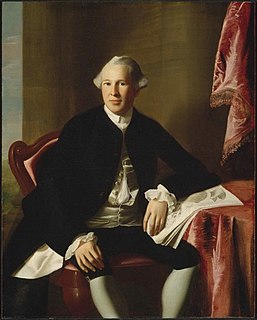 Joseph Warren was an American physician who played a leading role in Patriot organizations in Boston during the early days of the American Revolution, eventually serving as President of the revolutionary Massachusetts Provincial Congress. Warren enlisted Paul Revere and William Dawes on April 18, 1775, to leave Boston and spread the alarm that the British garrison in Boston was setting out to raid the town of Concord and arrest rebel leaders John Hancock and Samuel Adams. Warren participated in the Battles of Lexington and Concord the following day, which are commonly considered to be the opening engagements of the American Revolutionary War.

Massachusetts Avenue is a major thoroughfare in Boston, Massachusetts, and several cities and towns northwest of Boston. According to Boston magazine, "Its 16 miles of blacktop run from gritty industrial zones to verdant suburbia, passing gentrified brownstones, college campuses and bustling commercial strips." 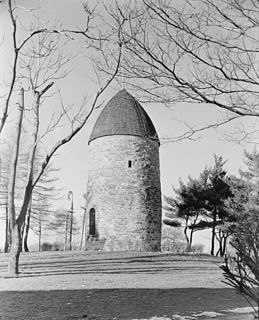 The Powder Alarm was a major popular reaction to the removal of gunpowder from a magazine by British soldiers under orders from General Thomas Gage, royal governor of the Province of Massachusetts Bay, on September 1, 1774. In response to this action, amid rumors that blood had been shed, alarm spread through the countryside to Connecticut and beyond, and American Patriots sprang into action, fearing that war was at hand. Thousands of militiamen began streaming toward Boston and Cambridge, and mob action forced Loyalists and some government officials to flee to the protection of the British Army. 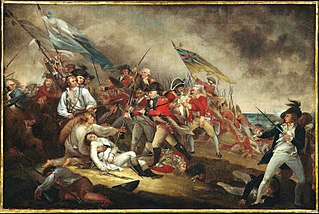 The Boston campaign was the opening campaign of the American Revolutionary War, taking place primarily in the Province of Massachusetts Bay. The campaign began with the Battles of Lexington and Concord on April 19, 1775, in which the local colonial militias interdicted a British government attempt to seize military stores and leaders in Concord, Massachusetts. The entire British expedition suffered significant casualties during a running battle back to Charlestown against an ever-growing number of militia. 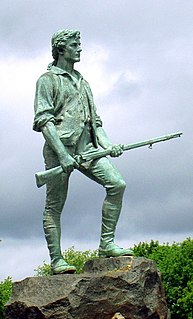 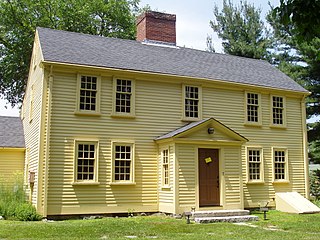 The Jason Russell House is a historic house in Arlington, Massachusetts, the site of the bloodiest fighting on the first day of the American Revolutionary War, April 19, 1775. The house was purchased in 1923 by the Arlington Historical Society which restored it in 1926, and now operates it as a museum from mid-April through the end of September, together with the adjoining Smith Museum, built in 1981 to house changing exhibitions of life in Arlington. 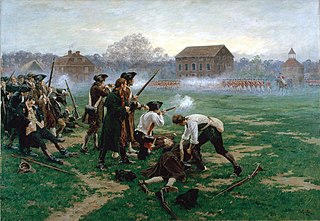 The battles of Lexington and Concord were the first military engagements of the American Revolutionary War. The battles were fought on April 19, 1775 in Middlesex County, Province of Massachusetts Bay, within the towns of Lexington, Concord, Lincoln, Menotomy, and Cambridge. They marked the outbreak of armed conflict between the Kingdom of Great Britain and its thirteen colonies in America.

The Cambridge Grant Historic District is a 322-acre (1.30 km2) historic district located on Russell Hill Road and Wilker Road in Ashburnham, Massachusetts, at an elevation of 1240–1300 feet above sea level. It was added to the National Register of Historic Places in 2001.

Thompson's War was an early American Revolutionary War confrontation between Samuel Thompson's patriot militia and loyalists supported by HMS Canceaux. The confrontation ended without fatalities, but provoked the retaliatory Burning of Falmouth five months later. Falmouth is now known as Portland, Maine, but Maine was part of Massachusetts at the time.

Cotton Tufts was a Massachusetts physician. He was a cousin of John Adams.

The Battle off Fairhaven was the first naval engagement of the American Revolutionary War. It took place on May 14, 1775, in Buzzards Bay off Fairhaven, Massachusetts and resulted in Patriot militia retrieving two vessels that had been captured by HMS Falcon. The patriots also captured the 13 man crew of the Royal Navy, the first naval prisoners of the war.

The towns of Concord and Lexington, Massachusetts are the site of Minute Man National Historical Park, a park governed by the National Park Service. The most highly-attended event in the park is the annual reenactment of the first shots of the Battles of Lexington and Concord, performed by the Lexington Minute Men Company and His Majesty's Tenth Regiment of Foot. 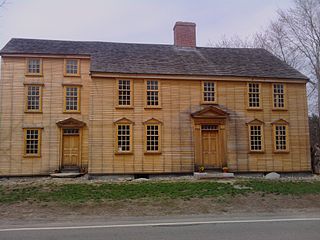 James Barrett was an American colonel in the Concord, Massachusetts militia during the Battles of Lexington and Concord that began the American Revolutionary War. His farm was the storage site of all the town of Concord's militia gunpowder, weapons and two pairs of prized bronze cannons, according to secret British intelligence.

The Battle of Menotomy was an action on April 19, 1775, in what is now Arlington, Massachusetts. Five thousand men from eastern Middlesex County and southern Essex County gathered in Menotomy to meet the retreating British troops on their way to Boston from Concord. Twenty-five rebels and 40 British troops were killed in this battle. It was here in Menotomy that the first British soldiers surrendered. 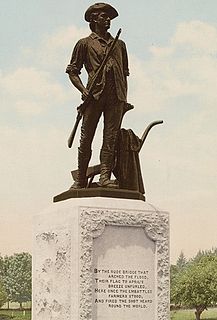 The Minute Man is an 1874 sculpture by Daniel Chester French located in Minute Man National Historical Park in Concord, Massachusetts. It was created between 1871 and 1874 after extensive research, and originally intended to be made of stone. The medium was switched to bronze and it was cast from ten Civil War-era cannons appropriated by Congress.

The Midnight Ride was the alert to the American colonial militia in April 1775 to the approach of British forces before the battles of Lexington and Concord.