Steel industry is an established and growing industry in Bangladesh. Predominantly based in the port city of Chittagong, the industry has emerged as a major contributor to the national economy. According to the experts, the growth of steel industry in Bangladesh is mainly induced by the rapid expansion of the country's shipbuilding and real estate sector, as well as the major investments in various infrastructure projects throughout the country.

Chittagong, officially known as Chattogram, is a major coastal city and financial centre in southeastern Bangladesh. The city has a population of more than 2.5 million while the metropolitan area had a population of 4,009,423 in 2011, making it the second-largest city in the country. It is the capital of an eponymous District and Division. The city is located on the banks of the Karnaphuli River between the Chittagong Hill Tracts and the Bay of Bengal. Much of Chittagong Division is located within the ecological Indo-Burma zone on the boundary of the India Plate and Burma Plate. This makes Chittagong the crossroads of the Indian subcontinent and Southeast Asia.

The first ever steel mill was established in 1952 by the H Akberali Group of Industries as the "Bangladesh Steel Re-rolling Mills (BSRM)". Located at Nasirabad, Chittagong, the plant formed re-enforcing bars and structural sections. The mill gradually prolonged, adopting new technological know-how by setting up a cross-nation European mill in 1987 which incorporated a wire-rod mill. The BSRM group added a captive billet manufacturing plants in 1996 so as to make sure a stable distribution of billets of its plants. In 2006, the company installed pilot cold rolling mill to make ribbed high strength wires. [1]

Bar stock, also (colloquially) known as blank, slug or billet, is a common form of raw purified metal, used by industry to manufacture metal parts and products. Bar stock is available in a variety of extrusion shapes and lengths. The most common shapes are round, rectangular, square and hexagonal or hex. A bar is characterised by an "enclosed invariant convex cross-section", meaning that pipes, angle stock and objects with varying diameter are not considered bar stock.

Bangladesh Steel industry is emerging as one of the major industrial sectors of the country. It consists of small up to the largest scale of steel melting and re-rolling factories across the country that mostly produce deformed bar rod of different grade (40, 60, 500), angel, channel and coil for the construction industry. Though the history of Steel Industry is not older one but it can make a glorious future. Before 1971 Bangladesh did not have any steel mill and even after the liberation there were only a few steel factories in the country. In 1990s the actual development began in this sector through a revolution. During that period the building constructing agencies or developer companies came forward to build modern infrastructure. Then with the increasing demand, new investors started investing in steel or rod production. In 2012 we have almost 400 mills across the country including Dhaka, Chittagong. Although most of them are manual steel plants, 30 mills among them are automated.

Many steel producing companies have gained reputation as a brand. Among them, GPH Ispat, BSRM, RSRM, KSRM, RRML, Anwar Steel, HKG Steel, AK Steel, Rahim Steel, Abul Khair Group are worth mentioning. Today the highest steel producing company is BSRM. They are doing business for 60 years. Their production is almost six and half lakh ton per year which meets 26% demand of the local market. Now grade 60 rods are being slowly replaced by g500 rods which a number of rolling mills in our country are now manufacturing. With g500, the real estate builders and developers can also save minimum 15% further quantity of steel than g60.

The domestic consumers of steel products include contractors, property developers, export processing zones, road and bridge construction companies, shipbuilding companies etc. The demand of steel is growing day by day due to the increased public works and some on going large projects.

The steel exporters of Bangladesh have ensured strong foothold especially in the African markets. As a result, Bangladesh is now considered as a major emerging player in the global stage. [5] [6] [7]

Ashuganj is an Upazila of Brahmanbaria District in the Division of Chittagong, Bangladesh.

PT Krakatau Steel (Persero) is the largest steel maker in Indonesia, headquartered in Cilegon, Banten. The factory location is set on a 700-acre in the western end of Banten and adjacent to the Sunda Strait, and where the Krakatoa volcano and island from which the company takes its name are located.

JSW Ispat Steel Ltd (JISL) was set up as Nippon Denro Ispat Limited in May 1984 by founding chairman Mr M L Mittal. The company have operations in iron, steel, mining, energy and infrastructure. It has two integrated steel plants, located at Dolvi and Kalmeshwar in the state of Maharashtra. The 1,200 acres (4.9 km2) Dolvi complex houses the 3 million tonne per annum hot rolled coils plant, which combines the latest technologies – the Conarc process for steel making and the compact strip process (CSP) – introduced in Asia. The company is listed on Bombay Stock Exchange and National Stock Exchange of India. It is headquartered at Mumbai and employs about 3000 people. Ispat Industries was ranked 5th among major next to Tata steel and JSW steel companies in India for the year 2008 by Business World.

The Dragon Group is directly responsible for the establishment of the sweater industry in Bangladesh, which now contributes about US $1.5 billion per year from export.

Electrotherm (India) Limited was founded in 1983 to cater to the needs of all segments of steel industry, foundries and heat treatment industry. Today, Electrotherm is a diversified conglomerate having businesses in the field of Engineering & Projects catering to steel and foundry industry; transformer manufacturing; steel making; ductile iron pipe making; manufacturing of battery operated vehicles; renewable energy; transmission line tower and education.

The automotive industry in Bangladesh is the third largest in South Asia.

Siemens-VAI based in Linz, Austria, was an engineering and plant building company for the iron and steel industry, for the flat-rolling sector of the aluminum industry and for open cast mining. It was one of the branches of Siemens Industrial Solutions and focused on metallurgical services.

JSW Steel Ltd. The flagship company of over $13 billion JSW Group, JSW Steel is one of India's leading integrated steel manufacturers with a capacity of 18 MTPA. It is one of the fastest growing companies in India with a footprint in over 140 countries. JSW Steel is an Indian steel company owned by the JSW Group based in Mumbai, Maharashtra, India. JSW Steel, after merger of ISPAT steel, has become India's second largest private sector steel company. The current installed capacity is 18 MTPA. A $13 billion conglomerate, with presence across India, USA, South America & Africa, the JSW Group is a part of the O.P. Jindal Group with strong footprints across core economic sectors, namely, Steel, Energy, Infrastructure, Cement, Ventures and Sports. JSW's history can be traced back to 1982, when the Jindal Group acquired Piramal Steel Limited, which operated a mini steel mill at Tarapur in Maharashtra and renamed it as Jindal Iron and Steel Company (JISCO).

Meghna Group of Industries (MGI) is one of the largest Bangladeshi industrial conglomerates. The industries under this conglomerate include chemicals, cement, consumer products, real estate, insurance, securities, utilities etc.

The industries under this conglomerate include foods and beverages, steel, real estate, furniture, agribusiness, plastics, etc. Its 2015-2016 turnover amounted to approximately US$5 billion. Partex Group is the largest family-run conglomerate in Bangladesh, consisting of over 70 factories.

City Group is one of the largest Bangladeshi conglomerates. It began on 6 February 1972 as a mustard oil company venture under the name City Oil Mills. The first project of City Oil Mills turned out to be very successful. After then, the company grew very quickly. It presently owns more than 23 major concerns located throughout Bangladesh. Now City Group stands as one of top ten business houses in Bangladesh. 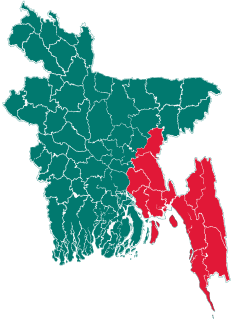 The Bangladesh Steel Re-Rolling Mills, commonly known as BSRM, (DSE:BSRMSTEEL) is a Bangladeshi steel manufacturing company based in Chittagong.

Sena Kalyan Sangstha is a trust owned and operated by Bangladesh Army. It owns a number of businesses including travel agency, electronics and cement factory and ice cream.

Bangladesh Steel and Engineering Corporation or BSEC, is a government owned corporation in Bangladesh.

PHP Family previously known as PHP Group of Industries is a Bangladeshi conglomerate based in Chittagong. It was founded in 1969 by Sufi Mohamed Mizanur Rahman who is the current chairman of the group.