Last updated June 23, 2021
Plant for steelmaking
For a mechanical device that produced sparks used to do lighting in mines, see Mechanically_powered_flashlight § "Steel_mills".

Since the invention of the Bessemer process, steel mills have replaced ironworks, based on puddling or fining methods. New ways to produce steel appeared later: from scrap melted in an electric arc furnace and, more recently, from direct reduced iron processes.

An integrated steel mill has all the functions for primary steel production:

The principal raw materials for an integrated mill are iron ore, limestone, and coal (or coke). These materials are charged in batches into a blast furnace where the iron compounds in the ore give up excess oxygen and become liquid iron. At intervals of a few hours, the accumulated liquid iron is tapped from the blast furnace and either cast into pig iron or directed to other vessels for further steel making operations. Historically the Bessemer process was a major advancement in the production of economical steel, but it has now been entirely replaced by other processes such as the basic oxygen furnace.

Molten steel is cast into large blocks called blooms. During the casting process various methods are used, such as addition of aluminum, so that impurities in the steel float to the surface where they can be cut off the finished bloom.

Because of the energy cost and structural stress associated with heating and cooling a blast furnace, typically these primary steel making vessels will operate on a continuous production campaign of several years duration. Even during periods of low steel demand, it may not be feasible to let the blast furnace grow cold, though some adjustment of the production rate is possible.

Integrated mills are large facilities that are typically only economical to build in 2,000,000-ton per year annual capacity and up. Final products made by an integrated plant are usually large structural sections, heavy plate, strip, wire rod, railway rails, and occasionally long products such as bars and pipe.

A major environmental hazard associated with integrated steel mills is the pollution produced in the manufacture of coke, which is an essential intermediate product in the reduction of iron ore in a blast furnace.

Integrated mills may also adopt some of the processes used in mini-mills, such as arc furnaces and direct casting, to reduce production costs.

A minimill is traditionally a secondary steel producer; however, Nucor (one of the world's largest steel producers) and Commercial Metals Company (CMC) use minimills exclusively. Usually it obtains most of its iron from scrap steel, recycled from used automobiles and equipment or byproducts of manufacturing. Direct reduced iron (DRI) is sometimes used with scrap, to help maintain desired chemistry of the steel, though usually DRI is too expensive to use as the primary raw steelmaking material. A typical mini-mill will have an electric arc furnace for scrap melting, a ladle furnace or vacuum furnace for precision control of chemistry, a strip or billet continuous caster for converting molten steel to solid form, a reheat furnace and a rolling mill.

Originally the mini mill was adapted to production of bar products only, such as concrete reinforcing bar, flats, angles, channels, pipe, and light rails. Since the late 1980s, successful introduction of the direct strip casting process has made mini mill production of strip feasible. Often a mini mill will be constructed in an area with no other steel production, to take advantage of local markets, resources, or lower-cost labour. Mini mill plants may specialize, for example, in making coils of rod for wire-drawing use, or pipe, or in special sections for transportation and agriculture.

Since the electric arc furnace can be easily started and stopped on a regular basis, mini mills can follow the market demand for their products easily, operating on 24-hour schedules when demand is high and cutting back production when sales are lower. 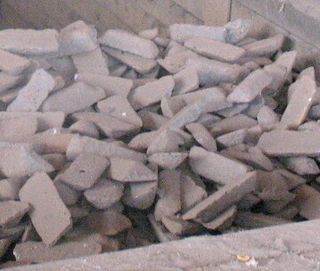 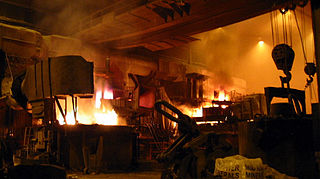 Nucor Corporation is a producer of steel and related products based in Charlotte, North Carolina. It is the largest steel producer in the United States, as well as the largest "mini-mill" steelmaker. It is also the biggest recycler of scrap in North America. 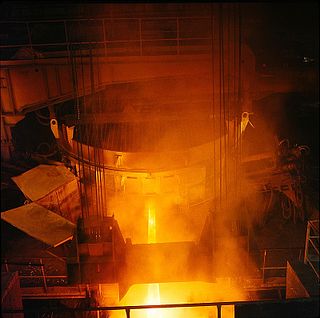 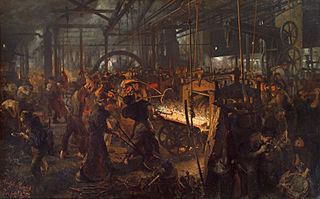 ArcelorMittal South Africa is part of the steel company Arcelor-Mittal. The company was originally Iscor Ltd., a South African parastatal steel company. It was founded in 1928 and was first listed on the JSE Securities Exchange in 1989. 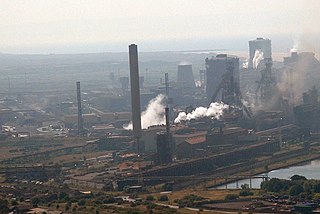 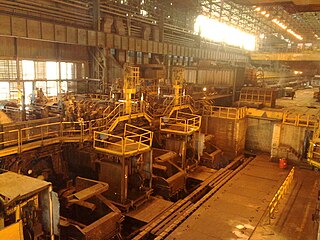 Mobarakeh Steel Company is an Iranian steel company, located 65 km south west of Esfahan, near the city of Mobarakeh, Esfahan Province, Iran. It is the largest steel maker of MENA region, and one of the largest industrial complexes operating in Iran. It was commissioned after the Iranian Revolution in 1979 and initiated operations during 1993. It underwent major revamping during year 2000, and is scheduled for a second and third revamping in 2009–2010, bringing the total steel output to 7,200,000 metric tons per year. The company owns the successful football club, Sepahan.

McLouth Steel is a former integrated steel company. The company was once the ninth largest steelmaker in the United States and had three locations. The first plant was in Detroit, Michigan, the second in Trenton, Michigan, and the third, a cold mill, in Gibraltar, Michigan. The Detroit and Trenton plants have been demolished, while the Gibraltar plant has been purchased and restarted by Ferrolux.

The Ravenscraig steelworks, operated by Colvilles and from 1967 by British Steel Corporation, consisted of an integrated iron and steel works and a hot strip steel mill. They were located in Motherwell, North Lanarkshire, Scotland.

PT Krakatau Steel (Persero) Tbk. is the largest steel maker in Indonesia, headquartered in Cilegon, Banten. The factory is set on a 280-hectare (700-acre) plot in the western end of Banten and adjacent to the Sunda Strait, and where the Krakatoa volcano and island from which the company takes its name are located.

Electrotherm (India) Limited was founded in 1983 to cater to the needs of all segments of steel industry, foundries and heat treatment industry. Today, Electrotherm is a diversified conglomerate having businesses in the field of Engineering & Projects catering to steel and foundry industry; transformer manufacturing; steel making; ductile iron pipe making; manufacturing of battery operated vehicles; renewable energy; transmission line tower and education.

The HIsarna ironmaking process is a direct reduced iron process for iron making in which iron ore is processed almost directly into liquid iron (pig iron). The process combines two process units, the Cyclone Converter Furnace (CCF) for ore melting and pre-reduction and a Smelting Reduction Vessel (SRV) where the final reduction stage to liquid iron takes place. The process does not require the manufacturing of iron ore agglomerates such as pellets and sinter, nor the production of coke, which are necessary for the blast furnace process. Without these steps, the HIsarna process is more energy-efficient and has a lower carbon footprint than traditional ironmaking processes. In 2018 Tata Steel announced it has demonstrated that more than 50% CO2 emission reduction is possible with HIsarna technology, without the need for carbon capture technology.

The Iron and Steel Industry in Scunthorpe was established in the mid 19th century, following the discovery and exploitation of middle Lias ironstone east of Scunthorpe, Lincolnshire, England.

The US iron and steel industry has paralleled the industry in other countries in technological developments. In the 1800s, the US switched from charcoal to coke in ore smelting, adopted the Bessemer process, and saw the rise of very large integrated steel mills. In the 20th century, the US industry successively adopted the open hearth furnace, then the basic oxygen steelmaking process. Since the American industry peaked in the 1940s and 1950s, the US industry has shifted to small mini-mills and specialty mills, using iron and steel scrap as feedstock, rather than iron ore. 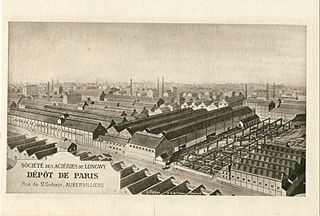