Swanand Kirkire was born and brought up at Rambagh in Indore [9] -based Marathi speaking family to Chintamani (father) and Neelambari (mother), both of whom are classical singers. However, Swanand had no formal training in singing.

He moved to Delhi after doing his graduation in commerce. In 1996, Swanand graduated from National School of Drama and started doing theatre. [10]

Swanand's first brush with direction came when he wrote and directed a play on freedom fighter Bhagat Singh in New Delhi. During his theatre days, he learned that Manju Singh, a television serial producer, was looking for a writer for her serial Swaraj, also on Bhagat Singh. He went to Mumbai and had an apartment in Warden Road. When the serial ended, he gave up his apartment and settled down in Goregaon, a Mumbai suburb.

Swanand was later introduced to filmmaker Pankaj Parashar, who in turn introduced him to director Sudhir Mishra. Mishra was doing a serial called Talash, with his assistant Ruchi Narain. He started assisting Sudhir while he was making Calcutta Mail , and then it continued with Chameli and Hazaaron Khwaishein Aisi . [11] [12] 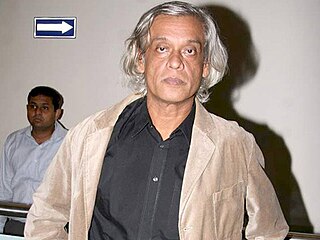 Hazaaron Khwaishein Aisi is an Indian political drama film made by director Sudhir Mishra in 2003 but released in 2005. Set against the backdrop of the Indian Emergency, the movie tells the story of three young people in the 1970s, when India was undergoing massive social and political changes. The title is taken from a poem by Urdu poet Mirza Ghalib.

Chitrangada Singh is an Indian film actress who works primarily in Hindi cinema. She has starred in films like Yeh Saali Zindagi, Hazaaron Khwaishein Aisi, Desi Boyz, Inkaar, I, Me Aur Main and Baazaar. 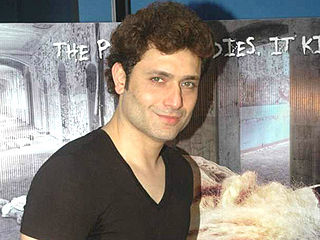 Shiney Ahuja is an Indian film actor, who won the Filmfare Best Male Debut Award for Hazaaron Khwaishein Aisi in 2005 and then followed with several hit films like Gangster, Woh Lamhe, Life in a Metro, Bhool Bhulaiyaa, and Welcome Back.

Khoya Khoya Chand, is an Indian Hindi film directed by Sudhir Mishra which released on 7 December 2007. The film stars Shiney Ahuja and Soha Ali Khan in the lead roles with Rajat Kapoor, Sushmita Mukherjee, Sonya Jehan and Vinay Pathak in important roles. The film captures the lifestyle of celebrities with aplomb with the 1950s film industry as its backdrop.

Hamsika Iyer is an Indian singer based in Mumbai. She is a regular voice with ad world jingles and Marathi tele-serials, and has sung songs in Kannada, Tamil, Hindi, Malayalam and Bengali movies.

Sandeep Kulkarni is an Indian actor and painter. He has worked in Marathi films as well as theatre. 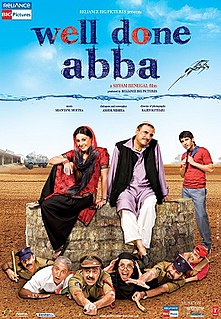 Well Done Abba is a 2010 Indian political satire Hindi film directed by Shyam Benegal, starring Boman Irani, Minissha Lamba and Sameer Dattani in pivotal roles. It is the remake of the 2007 Marathi film, Jau Tithe Khau. It was based on three short stories: Narsaiyyan Ki Bavdi by Jeelani Bano, Phulwa Ka Pul by Sanjeev and Still Waters by Jayant Kripalani. The screenplay was written by Jayant Kripalani and Ashok Mishra, who also wrote the dialogues. It won the 2009 National Film Award for Best Film on Social Issues.

Shiv Kumar Subramaniam is an Indian actor and screenwriter who is known for his role as the leading industrial tycoon I. M. Virani in the Indian television serial Mukti Bandhan on Colors channel. He is credited for writing the screenplay for the 1989 film Parinda, directed by Vidhu Vinod Chopra and for the 2005 film Hazaaron Khwaishein Aisi, directed by Sudhir Mishra. He also appeared in supporting roles in both films.

Jo Jeeta Wohi Superstar 2 is an Indian reality show which is running on STAR Plus. It is in its 2nd season. Its 1st season premiered on 11 April 2008 and ended on 12 July 2008 now it has again started from 31 March 2012 and its finale was on 24 June 2012 Irfan won the title of Jo Jeeta Wohi Super Star 2, Sreeram took the 2nd place while Akanksha took the 3rd place 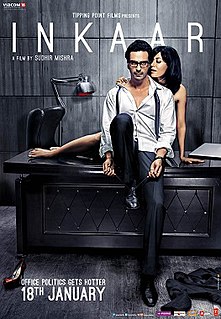 Inkaar (transl. Denial) is a 2013 Indian drama romance film directed by Sudhir Mishra and produced by Viacom18 Motion Pictures, starring Arjun Rampal and Chitrangada Singh in the lead roles. Shantanu Moitra has composed the music for the film. Deepti Naval, Vipin Sharma, Gaurav Dwivedi are featured in supporting roles. The film was produced and distributed under the Viacom 18 Motion Pictures and the Tipping Point Films banners. The film deals with sexual harassment in a corporate set-up following the story of Rahul Verma, the CEO of an advertising agency, who has to follow the lawsuit of sexual harassment filed by Maya Luthra, his protégé. The two are battling for the top job of the company. A committee is set up by the agency to hear both sides of the story and work through lies and accusations to find out the truth.

Akhil Mishra is an Indian film and television actor who has worked in films such as Hazaaron Khwaishein Aisi, Gandhi, My Father and television serials such as Pradhanmantri. He was working in the serial Do Dil Bandhe Ek Dori Se. He became famous by doing the cameo role of Librarian Dubey in 3 Idiots. He also acted in Bhopal: A Prayer for Rain.

The Producers Guild Film Awards for Best Lyricist is given by the producers of the film and television guild as part of its annual award ceremony to recognise the best Indian film of the year. Following its inception in 2004, no one was awarded in 2005 and 2007.

October is the soundtrack album to the 2018 Bollywood film of the same name, directed by Shoojit Sircar. The album is composed by Shantanu Moitra, Anupam Roy and Abhishek Arora and features playback singers such as Armaan Malik, Rahat Fateh Ali Khan, Sunidhi Chauhan and Monali Thakur. It was released on 28 March 2018 by Zee Music Company and in general, the album received positive response from the critics. The album consists of five tracks whose lyrics are penned by Swanand Kirkire, Tanveer Ghazi and Abhiruchi Chand.