The three-toed jacamar (Jacamaralcyon tridactyla) is a species of bird in the family Galbulidae. It is monotypic within the genus Jacamaralcyon.

The three-toed jacamar is one of 18 jacamar species in the family Galbulidae. It is in the monotypic genus Jacamaralcyon, [3] and has no subspecies. [4] When he first described it in 1807, French naturalist François Levaillant named the species "jacamaralcion", a combination of the words "jacamar" and "alcyon" — the latter a form of the word "halcyon", meaning "kingfisher". [5] French ornithologist Louis Jean Pierre Vieillot assigned it to the large jacamar genus Galbula when he established a scientific name for it in 1817, naming it Galbula tridactyla. In 1830, French ornithologist René Primevère Lesson created the genus Jacamaralcyon, separating the three-toed jacamar from other jacamar species on the basis of its unusual foot structure; [6] the genus name is a nod to Levaillant's earlier common name for the bird. [5] The specific name tridactyla is a combination of the Greek words tri, meaning "three" and dactulos, meaning "toes". [5]

Like all members of its family, the three-toed jacamar is short-legged and short-winged. It perches upright, with its tail down and its long, sharply-pointed beak uptilted. [7] It is a medium-sized bird, measuring 18 cm (7.1 in) in length [8] and weighing between 17.4 and 19.3 g (0.61 and 0.68 oz); females average heavier than males. [9] The sexes are similarly plumaged: slaty black with a bronzy-green gloss above, and somewhat paler below. The belly and the center of the breast are white. The adult has a brownish-gray cap and a black throat, and the cap, chin and the sides of the head are finely marked with pale fulvous streaks. Its bill is black, and its feet are slaty gray. [2]

Unlike other members of its family, the three-toed jacamar has three, rather than four, toes. Its small zygodactyl feet are missing a hind toe, and the front two toes are fused together at the base. [7]

Endemic to southeastern Brazil, the three-toed jacamar is found in drier parts of the Atlantic Forest. [7] It is now restricted to the states of Rio de Janeiro (primarily in the Paraíba do Sul valley) and eastern Minas Gerais, though populations also formerly existed in the states of Espírito Santo, São Paulo and Paraná. Although it is generally found in intact forest, it can survive in more degraded areas, such as plantations, provided that a native understory layer persists. There is some evidence that it is associated with streams, as it needs earthen banks in which to nest; it also uses banks created by road cuttings. [8] The species is largely sedentary, though youngsters disperse after fledging, and adults sometimes move short distances. [7]

Although it is a colonial nester, the three-toed jacamar is generally found singly or in pairs. It sometimes joins mixed species flocks. [7]

Like all jacamars, the three-toed jacamar is an insectivore. [7] It feeds preferentially on small, cryptically colored moths and butterflies, and Hymenoptera, but will also take flies, dragonflies, beetles, true bugs and termites. [8] It hunts from an open perch in the forest understory or along the forest edge, sallying after prey which it often beats on a branch; this serves to stun the insect, and to remove any stinger or venom, [7] as well as the wings. [10]

Three-toed jacamars breed during Brazil's rainy season, with vocalizations and other courtship behaviors increasing between September and February. [10] During courtship, rival males sit side by side on a branch, flicking their wings and pumping their tails as they sing. Territories are defended vocally, with rivals rarely resorting to physical confrontation. [7] The species excavates a burrow nest, using one foot at a time to dig into an earthen bank; evidence (in the form of dirty and broken beaks on female museum specimens) suggests that the female may do most or all of the nest digging. Burrows are 6 cm (2.4 in) wide and 6–9 cm (2.4–3.5 in) high, and may extend as much as 72 cm (28 in) into the bank. [10] The species tends to nest colonially. [7] The female lays 2–4 eggs. [7]

The three-toed jacamar is a species in trouble; habitat loss and habitat degradation have contributed significantly to its steep decline, and it is now rated as vulnerable by the International Union for the Conservation of Nature. Its total population is estimated at 350–1500 individuals, which survive in small, widely scattered pockets of appropriate habitat across southeastern Brazil. [8]

Nine families of largely arboreal birds make up the order Piciformes, the best-known of them being the Picidae, which includes the woodpeckers and close relatives. The Piciformes contain about 71 living genera with a little over 450 species, of which the Picidae make up about half.

The jacamars are a family, Galbulidae, of near passerine birds from tropical South and Central America, extending up to Mexico. The family contains five genera and 18 species. The family is closely related to the puffbirds, another Neotropical family, and the two families are often separated into their own order, Galbuliformes, separate from the Piciformes. They are principally birds of low-altitude woodlands and forests, and particularly of forest edge and canopy.

The puffbirds and their relatives in the near passerine family Bucconidae are tropical tree-dwelling insectivorous birds that are found from South America up to Mexico. Together with their closest relatives, the jacamars, they form a divergent lineage within the order Piciformes, though the two families are sometimes elevated to a separate order Galbuliformes. Lacking the iridescent colours of the jacamars, puffbirds are mainly brown, rufous or grey, with large heads, large eyes, and flattened bills with a hooked tip. Their loose, abundant plumage and short tails makes them look stout and puffy, giving rise to the English name of the family. The species range in size from the rufous-capped nunlet, at 13 cm (5.1 in) and 14 g (0.49 oz), to the white-necked puffbird, at up to 29 cm (11 in) and 106 g (3.7 oz). 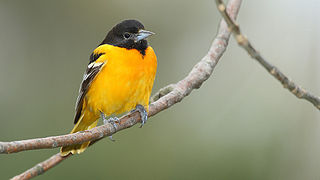 The Baltimore oriole is a small icterid blackbird common in eastern North America as a migratory breeding bird. It received its name from the resemblance of the male's colors to those on the coat-of-arms of Lord Baltimore. Observations of interbreeding between the Baltimore oriole and the western Bullock's oriole, Icterus bullockii, led to both being classified as a single species, called the northern oriole, from 1973 to 1995. Research by James Rising, a professor of zoology at the University of Toronto, and others showed that the two birds actually did not interbreed significantly. 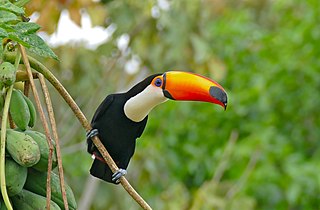 The toco toucan, also known as the common toucan or giant toucan, is the largest and probably the best known species in the toucan family. It is found in semi-open habitats throughout a large part of central and eastern South America. It is a common attraction in zoos. 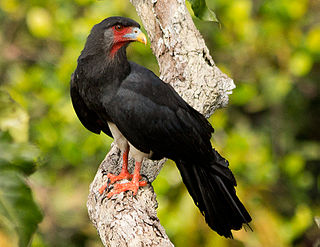 The red-throated caracara is a social species of bird of prey in the family Falconidae. It is placed in the monotypic genus Ibycter, or sometimes united in Daptrius with the black caracara. Unique among caracaras, it mainly feeds on the larvae of bees and wasps, but also takes the adult insects and fruits and berries.

The black-banded owl is a species of owl in the family Strigidae. Entirely nocturnal, this midsized black and white neotropical bird is a resident species, therefore never migrates out of its native South America. Its natural habitats are varied subtropical or tropical forests ranging from lowlands to areas of medium altitude, and it has been found in Argentina, Bolivia, Brazil, Colombia, Ecuador, French Guiana, Guyana, Paraguay, Peru, Suriname, and Venezuela. 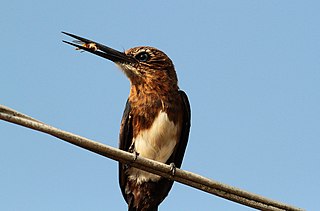 The brown jacamar is a species of bird in the family Galbulidae. It is found in Bolivia, Brazil, Colombia, Ecuador, French Guiana, Guyana, Peru, Suriname, and Venezuela. Its natural habitats are subtropical and tropical moist lowland forests and heavily degraded former forest. This bird was originally described by William John Swainson in 1838. This bird is feed on insects, especially for flying insects.

Galbalcyrhynchus is a genus of birds in the Galbulidae family. Established by Marc Athanese Parfait Oeillet Des Murs in 1845, it contains the following species:

The yellow-billed jacamar is a species of bird in the family Galbulidae. It is found in Brazil, Colombia, French Guiana, Guyana, Suriname, and Venezuela. It is a bird of the Amazon Basin; its range is only on the north side of the Amazon River, except at the river's outlet in a small region of northeastern Pará state, Brazil. The Andes cordillera is the western limit of the species. 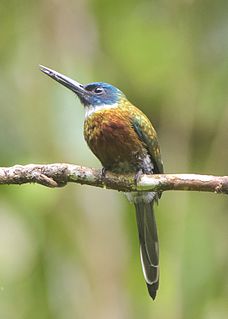 The purplish jacamar is a species of bird in the family Galbulidae.

The bluish-fronted jacamar is a species of bird in the family Galbulidae. 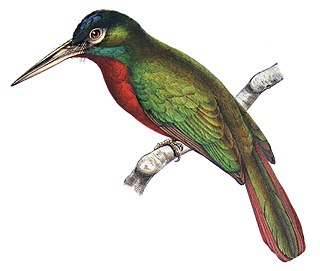 The blue-necked jacamar or blue-cheeked jacamar is a species of bird in the family Galbulidae.

The green-tailed jacamar is a species of bird in the family Galbulidae. 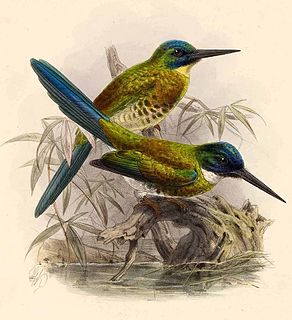 The bronzy jacamar is a species of bird in the family Galbulidae. It is found in north-central South America in the Amazon Basin and the Guianas.

The coppery-chested jacamar is a species of bird in the family Galbulidae. It is found in far southern Colombia, Ecuador and far northern Peru. Its natural habitat is subtropical and tropical moist montane forests. It is threatened by habitat loss. 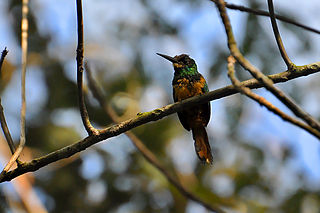 The great jacamar is a species of bird in the family Galbulidae. It is placed in the monotypic genus Jacamerops. It is found in Bolivia, Brazil, Colombia, Costa Rica, Ecuador, French Guiana, Guyana, Panama, Peru, Suriname, and Venezuela, where its natural habitat is subtropical and tropical moist lowland forests. 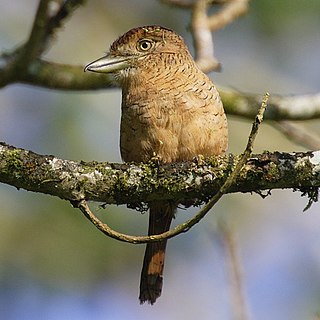