Thumba Equatorial Rocket Launching Station (TERLS) is an Indian spaceport established on 21 November 1963. [1] Operated by the Indian Space Research Organisation (ISRO), it is located in Thumba, Thiruvananthapuram, Kerala, which is near the southern tip of mainland India, very close to earth's magnetic equator. It is currently used by ISRO for launching sounding rockets. [1]

The first rockets were assembled in former St Louis High School, which houses now a space museum. [2] The local Bishop, Rev. Peter Bernard Periera, Bishop of Trivandrum, Vincent Victor Dereere (a Belgian) and district collector Madhavan Nair were instrumental in acquiring a large parcel of land measuring 600 acres from coastal community. [3] The Bishop Rev. Periera had given away the prayer hall and bishop's room in the local church for scientific pursuits of A. P. J. Abdul Kalam. [4] Then Minister of State for External Affairs, Lakshmi N. Menon helped a lot in smoothing the bureaucratic hurdles before the project at Delhi. [5] H.G.S. Murthy was appointed as the first Director of Thumba Equatorial Rocket Launching Station. [6]

The sounding rocket systems for the launch were loaned by NASA and payload was provided by CNES. The event did not gain the global media attention it deserved due to the Assassination of John F. Kennedy that happened in the following day.

Thumba's [7] location at 8°32'34" N and 76°51'32" E is ideal for low-altitude, upper atmosphere and ionosphere studies. Thumba is a small fishing village situated close to the Thiruvananthapuram airport in Kerala. [8] Thumba is also one of the farthest points from Pakistan, China, Afghanistan and Bangladesh. [9]

Thiruvananthapuram, also known by its former name Trivandrum, is the capital of the Indian state of Kerala. It is the most populous city in Kerala with a population of 957,730 as of 2011. The encompassing urban agglomeration population is around 1.68 million. Located on the west coast of India near the extreme south of the mainland, Thiruvananthapuram is a major information technology hub in Kerala and contributes 55% of the state's software exports as of 2016. Referred to by Mahatma Gandhi as the "Evergreen city of India", the city is characterised by its undulating terrain of low coastal hills.

Sriharikota is a barrier island off the Bay of Bengal coast located in the Shar Project settlement of Tirupati district in Andhra Pradesh, India. It houses the Satish Dhawan Space Centre, one of the two satellite launch centres in India. Indian Space Research Organisation (ISRO) launches satellites using multistage rockets such as the Polar Satellite Launch Vehicle and the Geosynchronous Satellite Launch Vehicle from Sriharikota.

Events in the year 1963 in the Republic of India.

Thumba is a coastal area of Thiruvananthapuram city, the capital of Kerala, India.

GSAT-3, also known as EDUSAT, was a communications satellite which was launched on 20 September 2004 by the Indian Space Research Organisation. EDUSAT is the first Indian satellite built exclusively to serve the educational sector. It is mainly intended to meet the demand for an interactive satellite-based distance education system for the country.

The economy of Thiruvananthapuram, capital of the Indian state of Kerala, mostly consists of tourism and leisure, information technology, rubber plantations, coffee production, tea production, and education. There are many manufacturers, such as Travancore Titanium Products Ltd and English Indian Clays.

Indian Institute of Space Science and Technology (IIST) is a government-aided institute and deemed university for the study and research of space science, located at Valiamala, Nedumangad, Thiruvananthapuram, Kerala. It is the first university in Asia to be solely dedicated to the study and research of Outer space. It was inaugurated on 14 September 2007 by G. Madhavan Nair, the then Chairman of ISRO. IIST was set up by the Indian Space Research Organisation (ISRO) under the Department of Space, Government of India. A. P. J. Abdul Kalam, former President of India, was the Chancellor of IIST. IIST offers regular engineering undergraduate, postgraduate and doctorate programmes with focus on space science, technology and applications.

The Indian National Committee for Space Research (INCOSPAR) was set up by Dr. Vikram Sarabhai in 1962 to formulate the Indian Space Programme. At the time, the committee was part of the Tata Institute of Fundamental Research. The committee took over the responsibilities of the Department of Atomic Energy in space science and research. The then director of the DAE, Dr. Homi Bhabha, was instrumental in creation of the committee.

Reusable Launch Vehicle–Technology Demonstration Programme is a series of technology demonstration missions that has been conceived by the Indian Space Research Organisation (ISRO) as a first step towards realising a Two Stage To Orbit (TSTO) re-usable launch vehicle.

Parivakkam Subramaniam Veeraraghavan is a well known space scientist and rocket technologist of India. He has served as the Director of Vikram Sarabhai Space Centre (VSSC), Thiruvananthapuram, Kerala and as the Director of ISRO Inertial Systems Unit (IISU), Thiruvananthapuram. One of the most senior scientists at Indian Space Research Organization (ISRO), Veeraraghavan is known for his contributions to launch vehicle technology, especially in the areas of integration & checkout and Inertial Systems of ISROs launch vehicles. Presently, he is holding the honorary position of Prof. Vikram Sarabhai Distinguished Professor in VSSC, ISRO since January 2013. 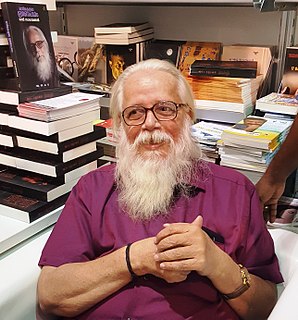 S. Nambi Narayanan is a Rocket Scientist and an aerospace engineer, who worked at the Indian Space Research Organisation (ISRO) and contributed in the development of Vikas rocket engine. He was awarded the Padma Bhushan, the third-highest civilian award by the Government of India, in 2019. He led the team which acquired technology from the French for the Vikas engine used in the first PSLV that India launched. As a senior official at the Indian Space Research Organisation (ISRO), he was in-charge of the cryogenics division.

Rohini is a series of sounding rockets developed by the Indian Space Research Organisation (ISRO) for meteorological and atmospheric study. These sounding rockets are capable of carrying payloads of 2 to 200 kilograms between altitudes of 100 to 500 kilometres. The ISRO currently uses RH-200, RH-300, RH-300 Mk-II, RH-560 Mk-II and RH-560 Mk-III rockets, which are launched from the Thumba Equatorial Rocket Launching (TERLS) in Thumba and the Satish Dhawan Space Center in Sriharikota.

Kailasavadivoo Sivan is an Indian space scientist who served as the Secretary of the Department of Space and chairman of Indian Space Research Organisation and Space Commission. He has previously served as the Director of the Vikram Sarabhai Space Center and the Liquid Propulsion Systems Centre.

Madhavan Pillai Ramakrishna Kurup was an Indian rocket scientist and the founder of the first solid rocket propellant plant in India at the Vikram Sarabhai Space Centre. He is known to have contributed to the successful launching of the Augmented Satellite Launch Vehicle (ASLV) as the director of the VSSC centre in Thiruvananthapuram. The Government of India awarded him the fourth highest civilian award of Padma Shri in 1990.

Eknath Vasant Chitnis is an Indian space scientist and a former member secretary at the Indian National Committee for Space Research (INCOSPAR), which evolved into the present-day Indian Space Research Organisation (ISRO). He is also a former director of Space Applications Centre of ISRO and a former colleague of APJ Abdul Kalam, the erstwhile president of India. The Government of India awarded him the Padma Bhushan, the third highest civilian award, in 1985.

V. R. Lalithambika is an Indian engineer and scientist working with the Indian Space Research Organisation (ISRO). She is a specialist in Advanced Launcher Technologies and is leading the Gaganyaan mission to send Indian astronauts to space by 2022.

Ramabhadran Aravamudan was an Indian space scientist and engineer who was associated with the Indian space programme from its initial days in 1962. Through his career he served as the director of the Thumba Equatorial Rocket Launching Station, Satish Dhawan Space Centre, and the ISRO Satellite centre. He was a recipient of the 2009 Aryabhata Award from the Astronautical Society of India.

Holenarasipur Govindrao Srinivasa Murthy was an Indian civil servant (IOFS) and space scientist. He was known as one of the "Seven Pioneers of the Indian Space Programme". He served at the Machine Tool Prototype Factory (MTPF), Ambernath, and as the first Director of the Thumba Equatorial Rocket Launching Station (TERLS), and the Space Science & Technology Centre, now known as the Vikram Sarabhai Space Centre, of the Indian Space Research Organisation (ISRO). He was awarded Padma Shri in 1969 by the Government of India.