Thurston railway station serves the village of Thurston in Suffolk,England. The station,and all trains serving it,are operated by Greater Anglia.

It is served primarily by local services between Ipswich and Cambridge.

Thurston station was opened by the Ipswich and Bury Railway in 1846. The main building was designed by Frederick Barnes in the Jacobean style using decorative brickwork. The building required three stories to reach the platforms from ground level owing to the station's location on an embankment. The building is Grade II listed and is no longer in railway use. Adjacent to the station building is an original bridge over the road. [1] [2]

According to the Official Handbook of Stations the following classes of traffic were being handled at this station in 1956:G,P,F,L,H,C and there was a 1-ton 10 cwt crane. H Clarke &Son had a private siding. [3]

On 4 October 1850,two stationmasters were killed by striking an overhead bridge near the station,when riding on a carriage roof with their backs to the engine. [4]

On 12 January 1944,whilst working a goods train from Ipswich to Whitemoor,the boiler of USATC S160 Class freight loco no. 2363 exploded at the station after the firebox crown became uncovered,injuring both driver and fireman. [5] [6]

On 8 May 2010,the station made national news after a trainspotter,who was so engrossed in filming a steam locomotive special hauled by 70013 Oliver Cromwell,failed to notice the rapid approach of a Class 170 multiple unit travelling in the other direction. [7] [8] [9] The near miss was caught on camera. After it went viral on the internet,he was dubbed by the railway press as a "vidiot" and drew widespread condemnation from rail enthusiasts and industry professionals. [10]

Greater Anglia operate hourly services to Cambridge and to Ipswich. [11] 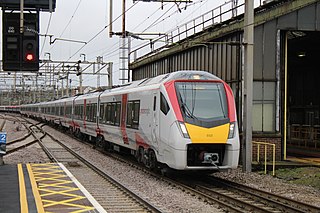 The Great Eastern Main Line is a 114.5-mile (184.3 km) major railway line on the British railway system which connects Liverpool Street station in central London with destinations in east London and the East of England,including Shenfield,Chelmsford,Colchester,Ipswich and Norwich. Its numerous branches also connect the main line to Southminster,Braintree,Sudbury,Harwich and a number of coastal towns including Southend-on-Sea,Clacton-on-Sea,Walton-on-the-Naze and Lowestoft.

The East Anglian Railway Museum is located at Chappel and Wakes Colne railway station in Essex,England,which is situated on the former Great Eastern Railway branch line from Marks Tey to Sudbury. Services on the Sudbury Branch Line are operated by Abellio Greater Anglia.

The East Suffolk line is an un-electrified 49-mile secondary railway line running between Ipswich and Lowestoft in Suffolk,England. The traffic along the route consists of passenger services operated by Greater Anglia,while nuclear flask trains for the Sizewell nuclear power stations are operated by Direct Rail Services. 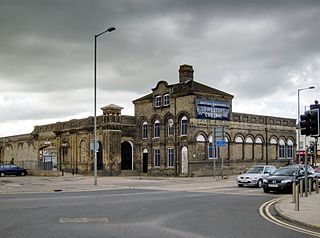 Lowestoft railway station serves the town of Lowestoft,Suffolk,and is the eastern terminus of the East Suffolk Line from Ipswich and is one of two eastern termini of the Wherry Lines from Norwich. Lowestoft is 23 miles 41 chains (37.8 km) down the line from Norwich and 48 miles 75 chains (78.8 km) measured from Ipswich;and is the easternmost station on the National Rail network in the United Kingdom. 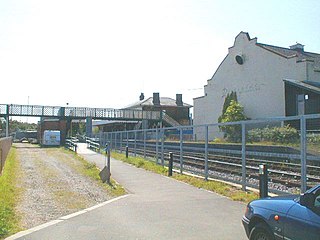 Woodbridge railway station is on the East Suffolk Line in the east of England,serving the town of Woodbridge,Suffolk. It is 10 miles 19 chains (16.5 km) down the line from Ipswich and 79 miles (127 km) measured from London Liverpool Street;it is situated between Westerfield and Melton. Its three-letter station code is WDB. 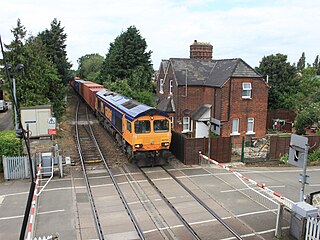 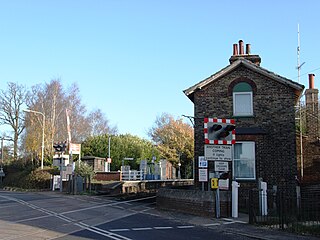 Westerfield railway station is on a branch line off the Great Eastern Main Line,in the East of England,serving the village of Westerfield,Suffolk. It is 3 miles 41 chains (5.7 km) down the line from Ipswich and 72 miles 25 chains (116.4 km) measured from London Liverpool Street. It is situated at a junction of the Felixstowe Branch Line to Felixstowe and the East Suffolk Line to Lowestoft. Its three-letter station code is WFI. 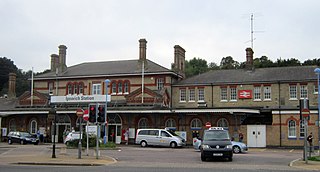 Ipswich railway station is on the Great Eastern Main Line in the East of England,serving the town of Ipswich,Suffolk. It is 68 miles 59 chains (110.6 km) down the line from London Liverpool Street and,on the main line,it is situated between Manningtree to the south and Needham Market to the north. 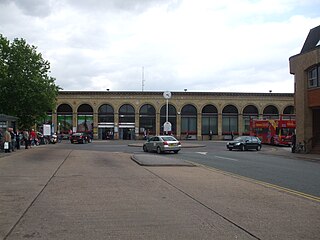 Cambridge railway station is the principal station serving the city of Cambridge in the east of England. It stands at the end of Station Road,1 mile (1.6 km) south-east of the city centre. It is the northern terminus of the West Anglia Main Line,55 miles 52 chains (89.6 km) down the line from London Liverpool Street,the southern terminus. 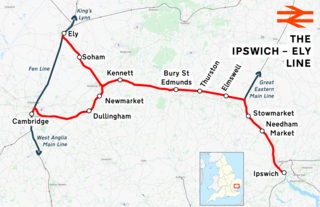 The Ipswich–Ely line is a railway line linking East Anglia to the English Midlands via Ely. There is also a branch line to Cambridge. Passenger services are operated by Abellio Greater Anglia. It is a part of Network Rail Strategic Route 5,SRS 05.07,05.08 and part of SRS 07.03. 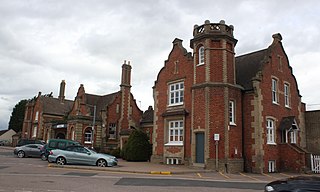 Stowmarket railway station is on the Great Eastern Main Line (GEML) in the East of England,serving the town of Stowmarket,Suffolk. It is 80 miles 9 chains (128.9 km) down the line from London Liverpool Street and is situated between Needham Market to the south and Diss to the north. It is also the junction where the Ipswich to Ely Line joins the GEML. Its three-letter station code is SMK.

Bury St Edmunds railway station serves the town of Bury St Edmunds in Suffolk,England. The station is on the Ipswich–Ely line and all trains calling there are operated by Greater Anglia.

Elmswell serves the village of Elmswell in Suffolk,England. The station,and all trains serving it,are today operated by Greater Anglia.

The Long Melford–Bury St Edmunds branch line was a railway between Long Melford on the Stour Valley Railway and Bury St Edmunds on the Ipswich to Ely Line. The line opened on 9 August 1865 and closed to passengers on 10 April 1961 and freight on 19 April 1965.

Haughley railway station was located in Haughley,Suffolk on the Great Eastern Main Line between Liverpool Street Station and Norwich. It opened on 7 July 1849 named Haughley Junction and was a replacement for a station named Haughley Road which had been in service from 1846 to 1849 at location TM 02981 63319 on the line to Elmswell.

The Eye Branch was a two miles 72 chains long single track branch railway line in Suffolk,England that ran from Mellis railway station on the Great Eastern Main Line to Eye via one intermediate station,Yaxley Halt. It was the shortest railway branch line in East Anglia to enjoy a regular passenger service. 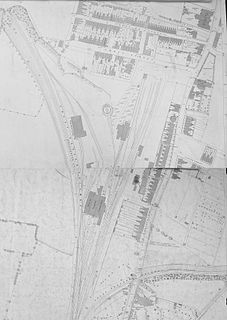 Ipswich engine shed was an engine shed located in Ipswich,Suffolk on the Great Eastern Main Line. It was located just south of Stoke tunnel and the current Ipswich railway station. Locomotives accessed the site from Halifax Junction which was also the junction for the Griffin Wharf branch of Ipswich docks. The depot opened in 1846 and closed in 1968 although the site remained in railway use for a further thirty years. 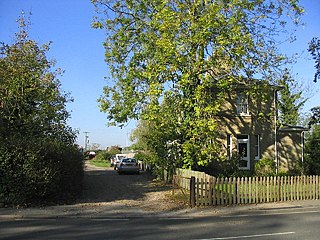 The Snape branch line was a railway branch line located in Suffolk which served Snape Maltings. It ran from Snape Junction on the East Suffolk line and was 1+1⁄4 long. The line was opened in 1859 and throughout its life was operated as a freight-only line. The line was closed 101 years later in 1960.

The East Suffolk line is a railway in East Anglia with a long history.