The tiger shrike or thick-billed shrike (Lanius tigrinus) is a small passerine bird which belongs to the genus Lanius in the shrike family, Laniidae. It is found in wooded habitats across eastern Asia. It is a shy, often solitary bird which is less conspicuous than most other shrikes. Like other shrikes it is predatory, feeding on small animals. Its nest is built in a tree and three to six eggs are laid.

It derives its name from the tiger-like pattern of its upperparts which are reddish-brown with dark bars. Adult males have white underparts and a grey head with a black mask. Females and young birds are duller and browner and young birds lack the grey and black on the head.

The tiger shrike was first described in 1822 by the Belgian naturalist Pierre Auguste Joseph Drapiez in the Dictionnaire classique d'histoire naturelle. [2] He placed it in the genus Lanius, a group of about 26 species living in open areas across Eurasia, Africa and North America. The name of the genus means "butcher" in Latin, referring to the birds' habit of impaling and storing prey. [3] Within the genus, analysis of calls suggests that the tiger shrike is most closely related to the brown shrike (L. cristatus) and bull-headed shrike (L. bucephalus). [3] It has no recognized subspecies.

The thick bill is blue-black with a black tip and the legs are grey-black. The adult male's back, rump and shoulders are reddish-brown with blackish bars creating a tiger-like pattern. It has a black forehead and mask and grey crown and nape. The wings and tail are brown and the underparts are white, sometimes with faint barring on the flanks. Females are duller and browner than the males with a less extensive black mask, less grey on the head, a narrow white stripe above the eye, pale patch between the bill and eye and buff-white flanks with black barring. Juvenile birds have dark scale-like markings on the head, back and underparts and lack the grey and black on the head. Their bill has a pale base and the eye appears large due to a pale ring around it. [3] [4]

The brown shrike is larger with a longer tail and thinner bill. Adults have a brown crown and nape, plain brown back and a white stripe over the eye. Juveniles are less contrastingly marked than the juvenile tiger shrike and have a dark mask. The bull-headed shrike is also larger and longer-tailed. Adults have a reddish-brown crown and nape and males have a white wing-patch. The Burmese shrike (Lanius collurioides) is slimmer and longer-tailed than the tiger shrike with a white wing-patch and a plain chestnut back. [3] [4]

Its song is a musical warbling. It has a variety of harsh calls including a loud, repeated territorial call, a chattering alarm call and a softer trilling call. It often calls from within cover but territorial males call from a prominent perch. [3]

It breeds in temperate regions of eastern Asia in deciduous or mixed woodland, forest edges and farmland with scattered trees. It is found in lowland areas, mainly occurring below 150 metres in Russia, 800 metres in Japan and 900 metres in China. Its range covers Ussuriland in the Russian Far East north to about 44°N, central and eastern China, Korea and northern and central parts of the Japanese island of Honshū. [3] [5]

It migrates southward in August and September, returning to the breeding grounds in May and June. It winters in tropical and subtropical regions of south-east Asia below 1,000 metres above sea-level. Its non-breeding range extends from south-east China south through eastern Burma, Thailand, Laos and Vietnam to Malaysia and Indonesia where a few reach Java and Bali in the south and Sulawesi in the east. In winter it occurs in forest clearings and edges, cultivated land, mangroves and gardens. [3]

Vagrant birds have occurred in Hong Kong and the Philippines. In Australia, a dead bird which may have arrived on a ship was once found near Fremantle and a bird was seen on Christmas Island in April 2008. [6] [7]

It has a wide distribution and a fairly large population and is not considered threatened with BirdLife International classing it as least concern. [8] However it has declined recently in Japan and Russia. [3] In Japan, it is now uncommon and local but was formerly common and occurred in the suburbs of Tokyo. [9]

It feeds mainly on insects, particularly grasshoppers, crickets, beetles, bugs, butterflies and moths. It also takes other arthropods and small birds and lizards. It typically hunts from a perch at the forest edge, perching less conspicuously than many other shrikes. It also forages among branches and leaves to find prey. [3]

The breeding season lasts from May to July. Pairs form during northward migration or soon after arrival on the breeding grounds and are monogamous. Courting males perch by the female, bowing the body up and down and moving the head from side to side while uttering a soft subsong, a more subdued version of the normal song. They also perform a fast display-flight while calling. [3]

The cup-shaped nest is built by both sexes, usually 1.5 to 5 metres above the ground on a branch in a deciduous tree but sometimes low down among bushes. It is made of stems, twigs, roots and other vegetation and is lined with grasses. [3]

Three to six eggs are laid with five being most common. They are variable in colour with dark markings on a whitish, pinkish or blue-green background. They measure 21.2-24.1 mm by 15.3-17.8 mm. They are incubated by the female for 14–16 days. The young birds fledge after about two weeks and remain close to the nest for another two weeks. Usually one clutch of eggs is laid in a year but a second clutch is laid if the first one is destroyed. Strong winds and predation by common magpies result in the loss of many eggs. [3]

The great grey shrike is a large songbird species in the shrike family (Laniidae). It forms a superspecies with its parapatric southern relatives, the Iberian grey shrike, the Chinese grey shrike and the American loggerhead shrike. Males and females are similar in plumage, pearly grey above with a black eye-mask and white underparts.

The red-backed shrike is a carnivorous passerine bird and member of the shrike family Laniidae. Its breeding range stretches from Western Europe east to central Russia. It is migratory and winters in the eastern areas of tropical Africa and southern Africa.

The woodchat shrike is a member of the shrike family Laniidae. It can be identified by its red-brown crown and nape. It is mainly insectivorous and favours open wooded areas with scattered trees such as orchards, particularly when there is bare or sandy ground. The woodchat shrike breeds in southern Europe, the Middle East and northwest Africa, and winters in tropical Africa.

The lesser grey shrike is a member of the shrike family Laniidae. It breeds in South and Central Europe and western Asia in the summer and migrates to winter quarters in southern Africa in the early autumn, returning in spring. It is a scarce vagrant to western Europe, including Great Britain, usually as a spring or autumn erratic.

The brown shrike is a bird in the shrike family that is found mainly in Asia. It is closely related to the red-backed shrike and isabelline shrike. The genus name, Lanius, is derived from the Latin word for "butcher", and some shrikes are also known as "butcher birds" because of their feeding habits. The specific cristatus is Latin for "crested", used in a broader sense than in English. The common English name "shrike" is from Old English scríc, "shriek", referring to the shrill call. 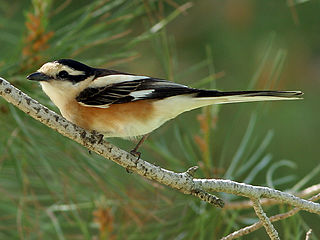 The masked shrike is a species of bird in the shrike family, Laniidae. It breeds in southeastern Europe and at the eastern end of the Mediterranean, with a separate population in eastern Iraq and western Iran. It is migratory, wintering mainly in northeast Africa. Although it is a short-range migrant, vagrants have occurred widely elsewhere, including northern and western Europe. It is the smallest member of its genus, long-tailed and with a hooked bill. The male has mainly black upperparts, with white on its crown, forehead and supercilium and large white patches on the shoulders and wings. The throat, neck sides and underparts are white, with orange flanks and breast. The female is a duller version of the male, with brownish black upperparts and a grey or buff tone to the shoulders and underparts. The juvenile has grey-brown upperparts with a paler forehead and barring from the head to rump, barred off-white underparts and brown wings аpart from the white primary patches. The species' calls are short and grating, but the song has melodic warbler-like components.

The yellow-billed shrike is a large passerine bird in the shrike family. It is sometimes known as the long-tailed shrike, but this is to be discouraged, since it invites confusion with the long-tailed shrike, Lanius schach, of tropical southern Asia. The yellow-billed shrike is a common resident breeding bird in tropical Africa from Senegal eastwards to Uganda and locally in westernmost Kenya. It frequents forest and other habitats with trees.

The bay-backed shrike is a member of the bird family Laniidae, the shrikes, resident in South Asia. 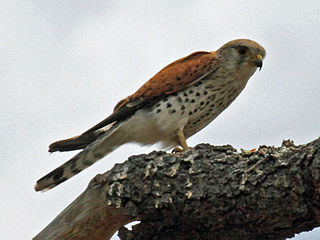 The Malagasy kestrel, also known as the Madagascar kestrel, Malagasy spotted kestrel, Newton's kestrel, Madagascar spotted kestrel, katiti (Creole) or hitsikitsika (Malagasy), is a small bird of prey of the genus Falco. It is named after British ornithologist Edward Newton. It occurs in two subspecies on Madagascar and at Aldabra. The race from Aldabra is also called Aldabra kestrel. Its closest living relative is the Seychelles kestrel; they were at one time considered conspecific. Their common ancestors appear to have diverged very recently, probably less than 1 million years ago during the Early or Middle Pleistocene. The Mauritius kestrel is more distantly related.(Groombridge et al. 2002) 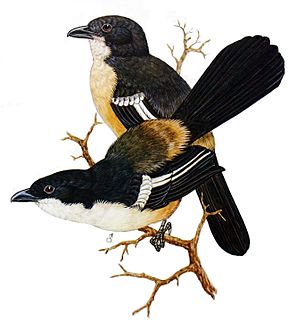 The southern boubou is a bushshrike. Though these passerine birds and their relations were once included with true shrikes in the Laniidae, they are not closely related to that family. 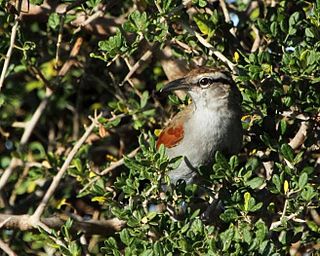 The southern tchagra is a passerine bird found in dense scrub and coastal bush in southern and south-eastern South Africa and Swaziland.

The Taita fiscal or Teita fiscal is a member of the shrike family found in east Africa from southeastern South Sudan, southern Ethiopia, and western Somalia to northeastern Tanzania. Its habitat is dry open thornbush and acacia and other dry open woodland. 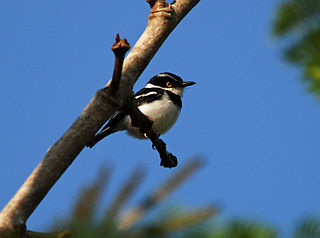 The Angolan batis is a species of bird in the family Platysteiridae. It is found in western central Africa.

The grey-headed batis is a species of bird in the wattle-eyes family, Platysteiridae, it was previously classified with the Old World flycatchers in the family Muscicapidae. It is found in eastern and central Africa.

The Senegal batis is a species of small passerine bird in the wattle-eyes family, Platysteiridae. It occurs in western Africa where it is found in dry savanna and subtropical or tropical dry shrubland. It was originally given the binomial name Muscicapa senegalensis by Carl Linnaeus in 1766.

The bull-headed shrike is a passerine bird of eastern Asia belonging to the shrike family Laniidae.

The southern white-crowned shrike is a species of bird in the family Laniidae. It is found in Angola, Botswana, Mozambique, Namibia, South Africa, and Zimbabwe. Its natural habitats are subtropical or tropical dry forests and dry savannah.

The grey-backed fiscal is a species of bird in the family Laniidae. It is found in Burundi, Cameroon, Central African Republic, Chad, Democratic Republic of the Congo, Ethiopia, Kenya, Mali, Mauritania, Nigeria, Rwanda, Sudan, Tanzania, and Uganda. Its natural habitats are dry savanna and subtropical or tropical dry lowland grassland.

The grey-backed shrike is a bird in the family Laniidae inhabiting South-east Asia.