Tonjon is an extinct Mande language once spoken by blacksmiths among the Djimini Senoufo of Ivory Coast. It was closely related to Ligbi, another blacksmith language.

The Mande languages are spoken in several countries in Africa by the Mandé people and include Maninka, Mandinka, Soninke, Bambara, Dioula, Bozo, Mende, Susu, and Vai. There are millions of speakers, chiefly in Burkina Faso, Mali, Senegal, the Gambia, Guinea, Guinea-Bissau, Sierra Leone, Liberia, and Ivory Coast. The Mande languages have traditionally been considered a divergent branch of the Niger–Congo family, however that categorisation has been controversial.

Blacksmiths emerged in West Africa around 1500 BCE. They are feared in some societies for their skill in metalworking, considered a form of magic. They are also much admired and hold high social status. Because the trade is so specialised and dangerous, blacksmiths are often requisitioned by towns and villages where there are none (Ross). Other ironworking societies such as the Mandé peoples of Mali and the Bamana exist in West Africa.

The Djimini people of Côte d’Ivoire belong to the larger Senoufo group. They have a population of about 100,000 and live in the north-eastern area of Côte d’Ivoire, in Burkina Faso and Mali.

The Ligbi tribe speaks the Mande language spoken in Ghana in the north-west corner of the Brong-Ahafo Region. Ligbi is spoken by approximately 10,000 speakers. It is fairly closely related to Jula, Vai and Kono. A small population of Ligbi speakers is reported to live in Ivory Coast. Ligbi is also known as Wela (Hwela) or Numu. The latter of these refers to a subsection of the Ligbi people; Numu is Dyula for 'blacksmith'.

The Domba or Dom are an ethnic group, or groups, scattered across India. In North India, the preferred self-designation is Dom.

Shors or Shorians are a Turkic people in the Kemerovo Oblast in Russia. Their self designation is Шор, or Shor. They were also called Kuznetskie Tatars, Kondoma Tatars, Mras-Su Tatars in some of the documents of the 17th–18th centuries.

A metalsmith or simply smith is a craftsman fashioning useful items out of various metals. Smithing is one of the oldest metalworking occupations. Shaping metal with a hammer (forging) is the archetypical component of smithing. Often the hammering is done while the metal is hot, having been heated in a forge. Smithing can also involve the other aspects of metalworking, such as refining metals from their ores, casting it into shapes (founding), and filing to shape and size. 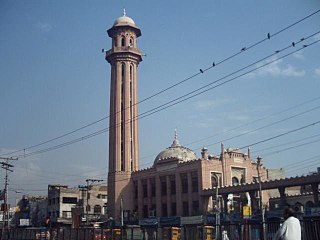 The Lahori Gate is located within Walled City of Lahore in Pakistan. Lahori Gate is one of the 13 gates of the Walled City of Lahore. Being one of the oldest gates of the old city, Lahori Gate is also known as Lohari gate. According to some historians, the original (old) city of Lahore was originally located near Ichhra, and this gate opened towards that side. Hence the name, Lahori gate. The name also traces back its roots to the language of Urdu, in which, “Lohar” means Blacksmith. This could also be another reason behind naming it this way. However, there are no concrete evidences available that blacksmiths used to live or work here.

The Jɔgɔ (Jogo) or Numu languages are at least a pair of closely related Mande languages, Ligbi of Ghana and the extinct Tonjon of Ivory Coast. Kpee of Burkina Faso is similar, but no comparison to Ligbi has been done.

The Lori are a nomadic community found in the Balochistan region of Iran and Pakistan. They must not be confused with Lurs, who are an entirely distinct people also living in Iran. The term "Lori" refers to trade designations not to an ethnicity.

Jeri is a cover term for two Mande language of northwestern Ivory Coast and southwestern Burkina Faso. The two had been thought until recently to be dialects of a single language, but they are now known to be clearly distinct. The Burkina language is Jalkunan, and the Ivory Coast language is Jeri Kuo. Jeri Kuo is spoken by people who traditionally constituted a caste-like minority within an otherwise mostly Senufo-speaking zone. The language is thought to be endangered, with 90% of ethnic Jeri having shifted to regionally dominant languages. The Jalkunan-speaking people of the Blédougou village cluster are not people of caste, although nearby villages of other ethnicities have entire sections populated by blacksmith and leatherworker castes. Jalkunan is being replaced by Jula (Dioula), but it is not immediately threatened by extinction.

Ndo, also Ke’bu or Membitu, is a Central Sudanic language of northeastern Congo and western Uganda spoken by a caste of blacksmiths.

Somyev (Somyewe), also known as Kila, is a nearly extinct Mambiloid language of two villages, one in Nigeria and one in Cameroon, that is spoken by a caste of blacksmiths that live among the Mambila. Although the language is still used for daily communication, the youngest generation of speakers were born in the 1950s. Transmission of the language ceased when the profession of blacksmithing lost its social status, partly due to imports of foreign tools.

The Mangbutu–Lese languages of the Central Sudanic language family, also known as Mangbutu–Efe or simply Mangbutu, are a cluster of closely related languages spoken in the Democratic Republic of Congo and Uganda.

The Kpee language, Kpeego, commonly called Numu (Noumoukan), is a Mande language spoken by blacksmiths (numu) in Burkina Faso. It is thought to be similar to Ligbi in Ghana, but no comparison has been done.

Johnny Larsen is a 1979 Danish drama film directed by Morten Arnfred. The film was selected as the Danish entry for the Best Foreign Language Film at the 52nd Academy Awards, but was not accepted as a nominee.

Fieraru and Fierarul are Romanian-language surname of occupational derivation, meaning "blacksmith". Notable people with the surname include:

Kuźniar is a Polish-language surname. It is an occupational surname literally meaning "blacksmith" (archaic), from "kuźnia", "smithy".

Kalvaitis is a Lithuanian-language surname derived from the word kalvis, "blacksmith". Notable people with this surname include: