A topical anesthetic is a local anesthetic that is used to numb the surface of a body part. They can be used to numb any area of the skin as well as the front of the eyeball, the inside of the nose, ear or throat, the anus and the genital area. [1] Topical anesthetics are available in creams, ointments, aerosols, sprays, lotions, and jellies. Examples include benzocaine, butamben, dibucaine, lidocaine, oxybuprocaine, pramoxine, proxymetacaine (proparacaine), and tetracaine (also named amethocaine).

Topical anesthetics are used to relieve pain and itching caused by conditions such as sunburn or other minor burns, insect bites or stings, poison ivy, poison oak, poison sumac, and minor cuts and scratches. [2]

Topical anesthetics are used in ophthalmology and optometry to numb the surface of the eye (the outermost layers of the cornea and conjunctiva) to:

In dentistry, topical anesthetics are used to numb oral tissue before administering a dental local anesthetic due to the entry of the needle into the soft tissues of the oral cavity. [3]

Some topical anesthetics (e.g. oxybuprocaine) are also used in otolaryngology.

Topical anesthetics are now commonly used in the temporary relief of premature ejaculation when applied to the glans (head) of the penis. Benzocaine or lidocaine are typically used for this purpose as they are available as over-the-counter drugs.

The duration of topical anesthesia might depend on the type and amount applied, but is usually about half an hour.[ citation needed ]

When used excessively, topical anesthetics can cause severe and irreversible damage to corneal tissues [4] [5] [6] [7] [8] and even loss of the eye. [9] The abuse of topical anesthetics often creates challenges for correct diagnosis in that it is a relatively uncommon entity that may initially present as a chronic keratitis, masquerading as acanthamoeba keratitis or other infectious keratitis. [4] [5] [7] [9] [10] When a keratitis is unresponsive to treatment and associated with strong ocular pain, topical anesthetic abuse should be considered, [7] and a history of psychiatric disorders and other substance abuse have been implicated as important factors in the diagnosis. [4] [9] [10] Because of the potential for abuse, clinicians have been warned about the possibility of theft and advised against prescribing topical anesthetics for therapeutic purposes. [5] [9]

Some patients who suffer from eye pain, which is often considerably strong neuropathic pain caused by the irritation of the nerves within the cornea and/or conjunctiva, try to illegally obtain oxybuprocaine or other eye anesthetics (for example by stealing them at their ophthalmologist or optometrist, by forging medical prescriptions or by trying to order it via an online pharmacy) and use the substance to numb their eye pain, often ending up with irreversible corneal damage or even destruction (which is a vicious cycle and causes more pain). Often, such patients finally require corneal transplantation.

In case of prolonged or chronic eye pain, especially neuropathic eye pain, it is highly advisable to use centrally acting substances like anticonvulsants (pregabalin, gabapentin and in more serious cases carbamazepine) or antidepressants (for example SSRIs or the tricyclic antidepressant amitriptyline). Even very small amounts of an anticonvulsant and/or an antidepressant can almost completely stop eye pain and does not damage the eye at all. 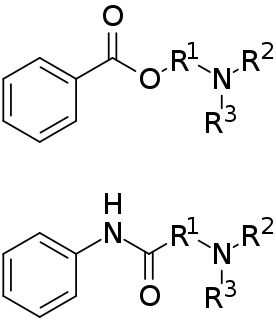 A local anesthetic (LA) is a medication that causes absence of pain sensation. When it is used on specific nerve pathways, paralysis also can be achieved.

Photokeratitis or ultraviolet keratitis is a painful eye condition caused by exposure of insufficiently protected eyes to the ultraviolet (UV) rays from either natural or artificial sources. Photokeratitis is akin to a sunburn of the cornea and conjunctiva, and is not usually noticed until several hours after exposure. Symptoms include increased tears and a feeling of pain, likened to having sand in the eyes. 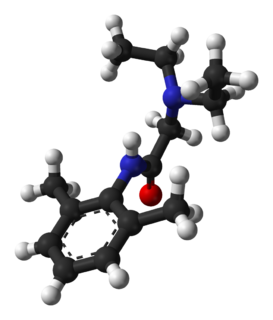 Lidocaine, also known as lignocaine, is a medication used to numb tissue in a specific area. It is also used to treat ventricular tachycardia and to perform nerve blocks. Lidocaine mixed with a small amount of adrenaline (epinephrine) is available to allow larger doses for numbing, to decrease bleeding, and to make the numbing effect last longer. When used as an injectable, lidocaine typically begins working within four minutes and lasts for half an hour to three hours. Lidocaine mixtures may also be applied directly to the skin or mucous membranes to numb the area.

A pterygium is a pinkish, triangular tissue growth on the cornea of the eye. It typically starts on the cornea near the nose. It may slowly grow but rarely grows so large that it covers the pupil and impairs vision. Often both eyes are involved. 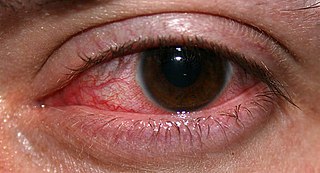 Keratitis is a condition in which the eye's cornea, the clear dome on the front surface of the eye, becomes inflamed. The condition is often marked by moderate to intense pain and usually involves any of the following symptoms: pain, impaired eyesight, photophobia, red eye and a 'gritty' sensation.

Radial keratotomy (RK) is a refractive surgical procedure to correct myopia (nearsightedness) that was developed in 1974, by Svyatoslav Fyodorov, a Russian ophthalmologist. It has been largely supplanted by newer operations, such as photorefractive keratectomy, LASIK, Epi-LASIK and the phakic intraocular lens. 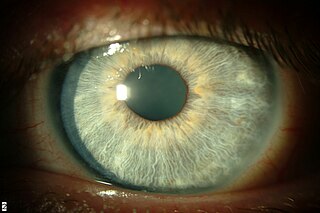 Thygeson's superficial punctate keratopathy (TSPK) is a disease of the eyes. The causes of TSPK are not currently known, but details of the disease were first published in the Journal of the American Medical Association in 1950 by the renowned American Ophthalmologist, Phillips Thygeson (1903–2002) - after whom it is named.

A red eye is an eye that appears red due to illness or injury. It is usually injection and prominence of the superficial blood vessels of the conjunctiva, which may be caused by disorders of these or adjacent structures. Conjunctivitis and subconjunctival hemorrhage are two of the less serious but more common causes.

Corneal abrasion is a scratch to the surface of the cornea of the eye. Symptoms include pain, redness, light sensitivity, and a feeling like a foreign body is in the eye. Most people recover completely within three days.

Oxybuprocaine (INN), also known as benoxinate or BNX, is an ester-type local anesthetic, which is used especially in ophthalmology and otolaryngology. Oxybuprocaine is sold by Novartis under the brand names Novesine or Novesin. 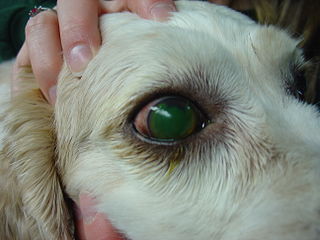 A corneal ulcer, or ulcerative keratitis, is an inflammatory condition of the cornea involving loss of its outer layer. It is very common in dogs and is sometimes seen in cats. In veterinary medicine, the term corneal ulcer is a generic name for any condition involving the loss of the outer layer of the cornea, and as such is used to describe conditions with both inflammatory and traumatic causes. 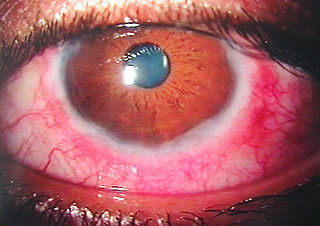 Vernal keratoconjunctivitis (VKC) is a recurrent, bilateral, and self-limiting inflammation of conjunctiva, having a periodic seasonal incidence. 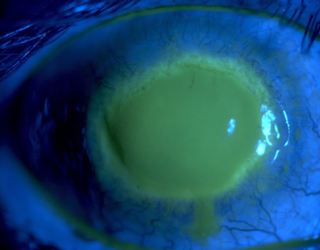 Corneal ulcer is an inflammatory or, more seriously, infective condition of the cornea involving disruption of its epithelial layer with involvement of the corneal stroma. It is a common condition in humans particularly in the tropics and the agrarian societies. In developing countries, children afflicted by Vitamin A deficiency are at high risk for corneal ulcer and may become blind in both eyes, which may persist lifelong. In ophthalmology, a corneal ulcer usually refers to having an infectious cause while the term corneal abrasion refers more to physical abrasions.

Diffuse lamellar keratitis (DLK) is a sterile inflammation of the cornea which may occur after refractive surgery, such as LASIK. Its incidence has been estimated to be 1 in 500 patients, though this may be as high as 32% in some cases. 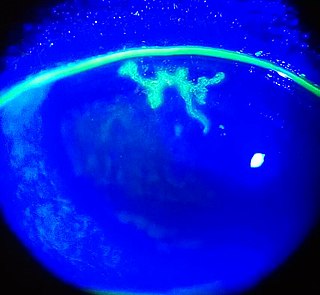 Pre Descemet's endothelial keratoplasty (PDEK) is a kind of endothelial keratoplasty, where the pre descemet's layer (PDL) along with descemet's membrane (DM) and endothelium is transplanted. Conventionally in a corneal transplantation, doctors use a whole cornea or parts of the five layers of the cornea to perform correction surgeries. In May 2013, Dr Harminder Dua discovered a sixth layer between the stroma and the descemet membrane which was named after him as the Dua's layer. In the PDEK technique, doctors take the innermost two layers of the cornea, along with the Dua's layer and graft it in the patient's eye.

Neurotrophic keratitis (NK) is a degenerative disease of the cornea caused by damage of the trigeminal nerve, which results in impairment of corneal sensitivity, spontaneous corneal epithelium breakdown, poor corneal healing and development of corneal ulceration, melting and perforation. This is because, in addition to the primary sensory role, the nerve also plays a role maintaining the integrity of the cornea by supplying it with trophic factors and regulating tissue metabolism.

Exposure keratopathy is medical condition affecting the cornea of eyes. It can lead to corneal ulceration and permanent loss of vision due to corneal opacity.