The film's sets were designed by Wilfred Arnold. It was made at Elstree Studios by the leading British company of the era British International Pictures. [1] It was originally intended to be a silent film, but following the arrival of sound, songs and dialogue were added using the RCA system. It was released in September 1929, around the same time as The American Prisoner , both films following on from the company's first sound release, Alfred Hitchcock's Blackmail , in June. [2]

A review in Close Up suggested it "has perhaps the best direction yet produced from a British studio". [3] 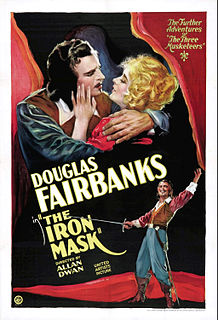 The Iron Mask is a 1929 American part-talkie adventure film directed by Allan Dwan. It is an adaptation of the last section of the 1847-1850 novel The Vicomte de Bragelonne by Alexandre Dumas, père, which is itself based on the French legend of the Man in the Iron Mask.

The Last Hour is a 1930 British comedy crime film directed by Walter Forde and starring Richard Cooper and Stewart Rome and Kathleen Vaughan. It is adapted from a successful play of the same title by Charles Bennett. 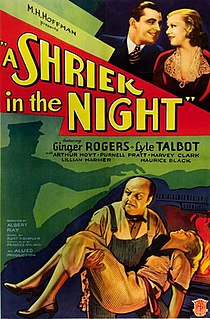 A Shriek in the Night is a 1933 American pre-Code mystery crime film with elements of romance directed by Albert Ray and starring Ginger Rogers, Lyle Talbot, and Harvey Clark. It was produced by the independent studio Allied Pictures, and remains the company's best-known release.

The Big Splash is a 1935 British comedy film directed by Leslie S. Hiscott and starring Frank Pettingell, Finlay Currie and Marguerite Allan. A millionaire hires a man to play his double. It was made as a quota quickie at Beaconsfield Studios.

The Men of Sherwood Forest is a 1954 British adventure film directed by Val Guest and starring Don Taylor, Reginald Beckwith, Eileen Moore and David King-Wood. The film follows the exploits of Robin Hood and his followers. Doreen Carwithen wrote the score for the film. Produced by Hammer Films it was shot at the company's Bray Studios with sets designed by the art director J. Elder Wills. Exteriors were shot at Bodiam Castle in Sussex. 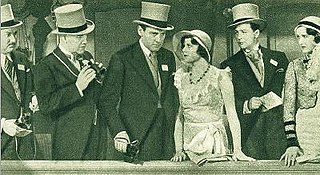 The Calendar is a 1931 British drama film directed by T. Hayes Hunter and starring Herbert Marshall, Edna Best and Anne Grey. Racehorse owner Anson is swindled by a woman named Wenda and goes up in front of the Jockey Club where he is disqualified on race fixing allegations. He decides to get his own back with the help of Hillcott, an ex-burglar. Jill is the love interest. It was released as Bachelor's Folly in the United States. 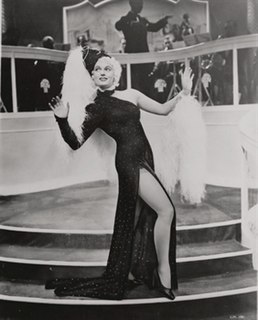 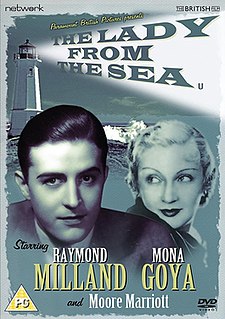 The Lady from the Sea is a 1929 British romance film directed by Castleton Knight and starring Ray Milland, Mona Goya, and Moore Marriott. A fisherman working off the Goodwin Sands becomes romantically attached to an upper-class woman. The film was also known as Goodwin Sands. The film was originally released as a silent film, but was re-released in a sound film version. 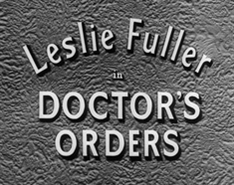 Doctor's Orders is a 1934 British comedy film directed by Norman Lee and starring Leslie Fuller, John Mills Marguerite Allan. It was produced by British International Pictures at the company's Elstree Studios. The film's sets were designed by the art director Cedric Dawe.

Helen Marguerite Allan was a Russian-born British actress, who appeared in film roles between 1928 and 1942 Allan was born in Saint Petersburg, Russia before moving to the United Kingdom, where she married Kenneth Chapman in 1948. She died in Wokingham, Berkshire on 29 January 1994 at the age of 88.

Wilfred Shine was a British actor, mainly on the stage, and a specialist in melodrama. He was the father of the actor Bill Shine.

The Power of One (film)

Old Soldiers Never Die is a 1931 British comedy film directed by Monty Banks and starring Leslie Fuller, Molly Lamont and Alf Goddard. It was made at Elstree Studios by British International Pictures. It was produced as a quota quickie for release as a second feature.

Father O'Flynn is a 1935 British musical film directed by Wilfred Noy and Walter Tennyson and starring Thomas F. Burke, Jean Adrienne and Robert Chisholm. It was made Shepperton Studios.

To What Red Hell is a 1929 British crime film directed by Edwin Greenwood and starring Sybil Thorndike, Bramwell Fletcher and Janice Adair. Made at Twickenham Studios, it was one of the earliest all-talking sound films to be produced in Britain.