The Happiest Days of Your Life (film)

Last updated December 08, 2022
1950 film by Frank Launder
For the original stage play, see The Happiest Days of Your Life (play).

The Happiest Days of Your Life is a 1950 British comedy film directed by Frank Launder, based on the 1947 play of the same name by John Dighton. [2] The two men also wrote the screenplay. It is one of a stable of classic British film comedies produced by Frank Launder and Sidney Gilliat for British Lion Film Corporation. The film was made on location in Liss and at Riverside Studios, London. In several respects, including some common casting, it was a precursor of the St. Trinian's films of the 1950s and 1960s. [3]

In September 1949, confusion reigns when St Swithin's Girls' School is accidentally billeted at Nutbourne College: a boys' school in Hampshire. The two heads, Wetherby Pond (Alastair Sim) and Muriel Whitchurch (Margaret Rutherford), try to cope with the ensuing chaos, as the children and staff attempt to live in the newly cramped conditions (it being impossible to share dormitories or other facilities), and seek to prevent the children taking advantage of their new opportunities.

Additional humour is derived from the departure of the Nutbourne College domestic staff and their hurried (and not very effective) replacement with the St Swithin's School Home Economics class.

The main comedy is derived from the fact that the parents of the St Swithin's girls would consider it improper for their daughters to be exposed to the rough mix of boys in Pond's school, and from the consequent need to conceal the fact that the girls are now sharing a school that's full of boys. Pond is offended at the suggestion that his boys are not suitable company for the young ladies of St Swithin's, but he needs to appease Miss Whitchurch to salvage his chances of an appointment to a prestigious all-boys school for which he is in the running, and which depends on his ability to prevent his current post presenting the appearance of a beer garden.

Matters come to a head when a group of school governors, from the prestigious establishment to which Pond has applied to become the next headmaster, pay a visit at the same time as the parents of some of the St Swithin's girls. Frantic classroom changes are made, and hockey, lacrosse and rugby posts and nets are swapped about, as pupils and staff try to hide the unusual arrangement.

Two simultaneous tours of the school premises are arranged: one for the girls' parents, and a separate one for the governors, and never the twain must meet! The facade finally collapses when the parents become obsessed with seeing a girls' lacrosse match at the same time as one of the governors has been promised a rugby match.

The punchline is delivered – a clever swipe at post-war bureaucracy – when, weeks too late, a Ministry of Schools official arrives, to declare everything sorted out. "You're a co-educational school, I believe; well I've arranged for another co-educational school to replace St Swithin's next week... Oh, it appears they're ahead of schedule." At this point, several more coachloads of children and staff appear noisily, and utter chaos reigns.

Fade out on Alastair Sim and Margaret Rutherford, quietly discussing in which remote and unattractive corner of the British Empire they might best try to pick up the pieces of their respective careers, with her mentioning having a brother who "grows groundnuts in Tanganyika."

BFI Screenonline states that Alastair Sim's portrayal of headmaster Wetherby Pond "is one of his greatest creations", but that both he and Margaret Rutherford were "decisively upstaged" by supporting actress Joyce Grenfell, as one of the teaching staff of St Swithin's. [3]

The film was successful on its release, being the fifth most popular film and the second-biggest money maker at the British box office for 1950. [6] [7] According to Kinematograph Weekly the 'biggest winners' at the box office in 1950 Britain were The Blue Lamp, The Happiest Days of Your Life, Annie Get Your Gun, The Wooden Horse, Treasure Island and Odette, with "runners up" being Stage Fright, White Heat, They Were Not Divided, Trio, Morning Departure, Destination Moon, Sands of Iwo Jima, Little Women, The Forsythe Saga, Father of the Bride, Neptune's Daughter, The Dancing Years, The Red Light, Rogues of Sherwood Forest, Fancy Pants, Copper Canyon, State Secret, The Cure for Love, My Foolish Heart, Stromboli, Cheaper by the Dozen, Pinky, Three Came Home, Broken Arrow and Black Rose. [8]

The Belles of St Trinian's (1954) is a similar comedy about a girls' school at which chaos reigned, which was also produced by Launder and Gilliat and featured several members of the cast of The Happiest Days of Your Life, including Alastair Sim, Joyce Grenfell, George Cole, Richard Wattis and Guy Middleton, with Ronald Searle providing the cartoons for the titles. [9]

Joyce Irene Grenfell OBE was an English diseuse, singer, actress and writer. She was known for the songs and monologues she wrote and performed, at first in revues and later in her solo shows. She never appeared as a stage actress, but had roles, mostly comic, in many films, including Miss Gossage in The Happiest Days of Your Life (1950) and Police Sergeant Ruby Gates in the St Trinian's series. She was a well-known broadcaster on radio and television. As a writer, she was the first radio critic for The Observer, contributed to Punch and published a volume of memoirs. 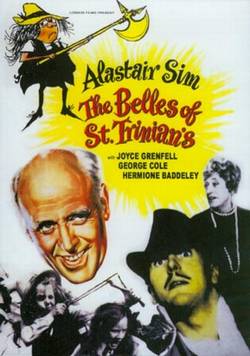 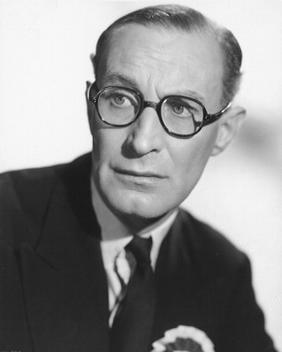 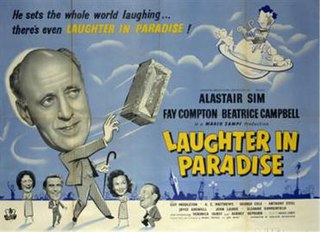 Laughter in Paradise is a 1951 British comedy film, starring Alastair Sim, Fay Compton, George Cole, and Guy Middleton. The film was remade as Some Will, Some Won't (1970). 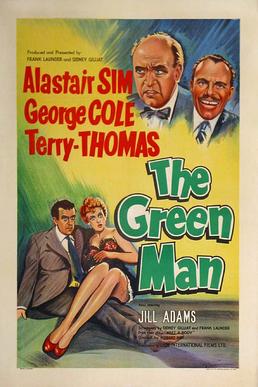 John Bentley was a British film actor. He had a successful career as a leading man from the 1940s to the late 50s and was a popular heart-throb who appeared in many British b-movies during that time. Later in his career, in the 1970s he appeared as Hugh Mortimer, Meg Richardson's ill-fated third husband in the famous English soap opera Crossroads. He also starred in the jungle adventure series African Patrol (1957) as Chief Inspector Paul Derek and made various other guest appearances in many popular TV series from the late 50s onwards.

The Happiest Days of Your Life is a farce by the English playwright John Dighton. It depicts the complications that ensue when because of a bureaucratic error a girls' school is made to share premises with a boys' school. The title of the play echoes the old saying that schooldays are "the happiest days of our lives".