Upton's Hill played a locally important role during the Civil War, as the Union Army command used the site as its headquarters. A large masonry fort was constructed opposite the road, at the hill's topmost point. This fort was originally called Fort Upton but was later renamed Fort Ramsay. By the end of the war, the Union Army built a tall wooden observation tower atop Congressman Upton's home, affording it line-of-sight communications with the Washington Monument and other observation and signal stations in the region.

For much of the 1960s, this was the headquarters for the American Nazi Party.  During that time, some called it “hatemongers hill.” The American Nazi Party was run by George Lincoln Rockwell and Matthias Koehl. Where park facilities are today, Stormtroopers Barracks once stood, complete with the swastika symbol on the building.  Armed guards would keep out all but the Nazis and their guests. A year later, in 1967, Rockwell was shot and killed by a rival Nazi in front of a laundromat on Wilson Boulevard. Within months of Rockwell's assassination, the Nazis lost their lease, and the property was put up for sale. The land passed first to a development company, and then to The Northern Virginia Regional Park Authority in 1973. The former barracks were demolished and park facilities were built.

The miniature golf course includes what was once the world's longest miniature golf hole, at 140 feet (43 m). The course was designed by minigolf designer Jim Bryant. [2] As of 2017, this is no longer the case, as several other miniature golf courses have been constructed since with longer holes, with the current Guinness World Records holder in Cortlandville, New York having a hole 18 with a measured length of 459.5 feet (140.1 m). [3]

The American Nazi Party (ANP) is an American neo-Nazi political party founded by George Lincoln Rockwell; its headquarters are in Arlington, Virginia. Rockwell founded the organization as the World Union of Free Enterprise National Socialists (WUFENS), but renamed it the American Nazi Party in 1960. Since the late 1960s, a number of small groups have used the name "American Nazi Party" with most being independent from each other and disbanding before the 21st century. The party is based largely upon the ideals and policies of Adolf Hitler's Nazi Party in Germany during the Nazi era, and embraced its uniforms and iconography. Shortly after Rockwell's murder in 1967, the organization appointed Rockwell's second in command, Deputy Commander Matt Koehl as the new leader. The American Nazi Party, now under Koehl's command, was subject to ideological disagreements between members in the 1970s and 1980s. "In 1982, Martin Kerr, a leader at the Franklin Road headquarters, announced that the organization was changing its name to the New Order and moving to the Midwest," effective January 1, 1983. Due to recruitment issues along with financial and legal trouble, Koehl was forced to relocate the group's headquarters from the DC area, eventually finding his way to scattered locations in Wisconsin and Michigan. After Koehl's death in 2014, long-time member and officer of the New Order, Martin Kerr assumed leadership and maintains the New Order website and organization.

Miniature golf, also known as minigolf, mini-putt, midget golf, crazy golf, or putt-putt, is an offshoot of the sport of golf focusing solely on the putting aspect of its parent game. The aim of the game is to score the lowest number of points. It is played on courses consisting of a series of holes similar to its parent, but characterized by their short length.

Speed golf is a variant of golf which scores both on strokes played and the time taken to complete the round.

NOVA Parks is an inter-jurisdictional organization that owns and operates more than 10,000 acres of woodlands, streams, parks, trails, nature reserves, countryside and historic sites in Northern Virginia in the United States. The Authority was organized in 1959. NOVA Parks presently operates 33 regional parks. 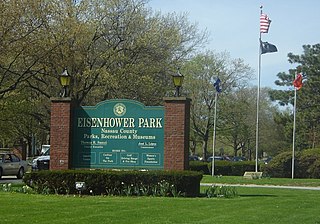 Eisenhower Park, formerly known as Salisbury Park, is centrally located in East Meadow, New York bordered by Hempstead Turnpike on the south and Old Country Road on the north. At 930 acres (3.8 km2), it is larger than Central Park, with much of the area devoted to three 18-hole golf courses, including the Red Course, host to the annual Commerce Bank Championship. The park is home to the September 11th Memorial for residents of Nassau County.

Fairview is an unincorporated community in Oscoda County in the U.S. state of Michigan. It is located within Comins Township at the intersection of highways M-33 and M-72 at 44°43′30″N84°03′04″W.

Pohick Bay Regional Park is a regional park on Pohick Bay of the Potomac River, in Fairfax County, northern Virginia.

Castle Golf and Games was a small amusement park located near I-10 and Loop 610 in Houston, Texas. The park contained several different courses of miniature golf, all with elaborately built decorations and structures. The most memorable two being a small windmill and small castle standing at the front of the park on each side, interacting with the putt-putt golf holes.

Minor's Hill is a geographic eminence located in the western tip of Arlington County, Virginia. Its summit rises to 459 feet above sea level which makes it the highest point in the county. The hill is named after a man named George Minor who lived there at the time of the American Revolutionary War.

Algonkian Regional Park is located on the Potomac River in Sterling, Virginia at Cascades, Virginia. The 838-acre park is owned and operated by the Northern Virginia Regional Park Authority and contains open fields, picnic shelters, rental cottages, an event center for weddings and meetings, a boat launch with access to the Potomac River, the Volcano Island water park open from May to September, and an 18-hole golf course. The park is bisected by the Potomac Heritage Trail.

Cantiague Park is a public park maintained by the Nassau County Department of Parks, Recreation, and Museums, located in Hicksville, New York.