The Venezuelan football league system is a series of interconnected football leagues for clubs in Venezuela, and is organized by the Venezuelan Football Federation at the national level. The system counts with promotions and relations between the different leagues in all different levels which means that even the smallest club can reach to the top level, the Primera División. 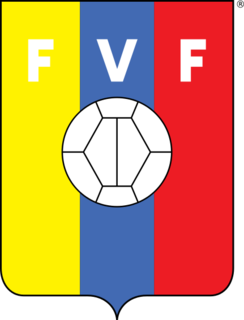 The Venezuelan Football Federation is the governing body of football in Venezuela. It was founded in 1926 and affiliated in 1952. It is a member of CONMEBOL as well as FIFA, and is in charge of the Venezuela national football team.

The Copa Venezuela (English: Venezuela Cup) is the national cup football competition of Venezuela. Organized by the Venezuelan Football Federation, is it disputed in the first half of the season by the teams in the Primera División, Segunda División and Segunda División B.

The Copa Venezuela is the national cup football competition of Venezuela. Organized by the Venezuelan Football Federation, is it disputed in the first half of the season by the teams in the Primera División, Segunda División A, and Segunda División B.

The Primera División, named Superliga Argentina since the 2017–18 season, is a professional football league in Argentina, organised by the homonymous entity, that is administrated independently and has its own statute. Nevertheless, the Superliga is contractually linked with the main football body, the Argentine Football Association (AFA) that organized all the championships from 1893 to 2017.

The Primera Categoría Serie A, simply known as the Serie A or the Primera A, is a professional football league in Ecuador. At the top of the Ecuadorian football league system, it is the country's premier football competition. Contested by twelve clubs, it operates a system of promotion and relegation with the Serie B, the lower level of the Primera Categoría. The season runs from February to December and is usually contested in multiple stages. It is sponsored by beer company Pilsener and is officially known as the Copa Pilsener Serie A.

The División Profesional de la Asociación Paraguaya de Fútbol, also known as the Primera División [pɾiˈmeɾa ðiβiˈsjon], or due to sponsorship reasons Copa TIGO [ˈkopa ˈtiɣo], is the top-flight professional football league in Paraguay. Currently, there are 12 teams in the first division.

The Royal Spanish Football Federation is the governing body of football in Spain. It is based in La Ciudad del Fútbol of Las Rozas, a municipality near Madrid. It was founded on 14 October 1909 as Federación Española de Clubs de Football, and officially founded on 29 September 1913.

Primera B Metropolitana is one of two professional leagues that form the third level of the Argentine football league system. The division is made up of 19 clubs mainly from the city of Buenos Aires and its metropolitan area, Greater Buenos Aires.

The Argentine football league system include tournaments organised by the Argentine Football Association. Clubs affiliated to the body compete in the tournaments, which are split into categories or divisions.

The Segunda División or Liga 2 of Peru is the second-highest division in the Peruvian football league system. It is a professional division and was declared a promotional division by the Peruvian Football Federation (FPF). After years of changing numbers of clubs, as of 2017 the league includes 15 clubs. It is currently organized by the Asociación Deportiva de Futbol Profesional - Segunda División.

The Copa Argentina, officially known as the "Copa Total Argentina" due to sponsorship reasons, is an official football cup competition organized by the Argentine Football Association (AFA), with the aim of qualifying one club to the Copa Libertadores.

The Ecuadorian football league system is a series of interconnected football leagues for clubs in Ecuador, and is governed by the Federación Ecuatoriana de Fútbol at the national level.

The Basque Football Federation is the federation responsible for managing association football in the Basque Country autonomous region.

The Basque Country tournament is an annual football competition held in Spain which serves as the preliminary round of the Copa Federación de España in the Basque Country (Euskadi) region. Organised by the Basque Football Federation, the participating clubs in the tournament are drawn from the Tercera División, as well as local clubs in the Segunda División B who have not qualified for the season's Copa del Rey, including reserve teams and farm teams. Not all teams eligible take part each year.

The Superliga Argentina de Fútbol, is an Argentine sports association responsible for administering the main professional league of Argentine football, the Primera División. The Superliga is contractually bound to the Argentine Football Association, although it operates as an autonomous body and has its own statute.