Football is the most popular sport in Turkmenistan, a country that gained independence in 1991. The national association regularly takes part in competitions organised by FIFA and the AFC at senior and youth level. Valeri Nepomniachi is probably the most famous name in Turkmen football. He was the coach who led Cameroon to the 1990 FIFA World Cup in Italy. The Africans surprised many with their 1–0 win over defending champions Argentina in the opening match and finally bowed out in the quarter-finals. [1] There are 40 clubs, 820 players, and 30 referees in the country. The major stadiums are: Köpetdag Stadium, Nabitchi (Nebitdag, 15,000 seats), and The Builder (Ashgabat, 11,000 seats). [2]

History of football in Turkmenistan

Football in Turkmenistan started to develop in the 1920s, however the sport became more organised when in 1937 the first championship of the Turkmen SSR was held. From 1937 until 1991, the most successful clubs were Neftyanik Kvasnovodsk and Pogranichnik Ashkhabad having won each six Turkmen SSR Championship Titles. [3]

Even though no team from the Turkmen SSR ever played in the Soviet Top League, [4] several footballers did, of whom most notably are Valeri Broshin, Kurban Berdyev, Sergey Agashkov, Ravshan Muhadov, [5] Dmitri Khomukha, Charyar Mukhadov and Vitaliy Kafanov.

The following Turkmenistani footballers had been members of USSR national football team:

The Turkmenistan national football team success came in 1993, when it became runners up in the 1993 ECO Cup losing 2–1 to the host nation Iran. More success followed when the team reached the quarter-finals stage of the 1994 Asian Games. Ten years later, the national team qualified for its only appearance in the continental tournament the 2004 AFC Asian Cup, then came close again for qualifying when reached the final of the 2010 AFC Challenge Cup losing to North Korea eventual champions in penalty shootouts. 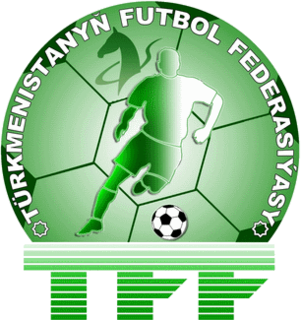 Football Club Köpetdag is a Turkmen football club based in Ashgabat, currently playing in the Ýokary Liga. Their home stadium is Köpetdag Stadium which can hold 26,000 people. Köpetdag traditional kit colours are blue and white. Having won 6 Turkmen championships and 6 Cup of Turkmenistan, they are one of the country's most successful clubs.

Yedigen Football Team is a Turkmenistan professional football club based in Ashgabat. It is the football team of the International Turkmen-Turkish University. They play in the top division of Turkmenistani football, the Turkmenistan Higher League. Their home stadium is the HTTU Stadium which can hold 1,000 people and is located on the University's grounds. The team consists of very young players who have helped the club to win the league three times in nine years.

Ashgabat Futbol Kluby is a Turkmen football club based in Ashgabat. They play in the top division of Turkmenistan football, Ýokary Liga. Their home stadium is Nisa Stadium. The club was first founded in 2006, they finished 3rd in their debut year under famous manager Ali Gurbani, who left the club following the home loss to Turan Dasoguz. After Rahym Gurbanmämmedow took charge, the club clinched their first title in 2007.

Kurban Bekiyevich Berdyev is a Turkmen football manager, and a former Soviet footballer. He holds Russian citizenship. In 2017 he was shown among top 50 managers in the world by fourfourtwo.com, at the 36th place, ahead of Brendan Rodgers.

Ahal Football Club is a Turkmen association football club based in the Änew, Ahal Province. Founded in 1989, club played its first-ever top flight season in 1992. Club plays its home matches at the 20,000-capacity Ashgabat Stadium.

Football Club Altyn Asyr, also known as Altyn Asyr Ashgabat or simply Altyn Asyr is a Turkmen football club based in Ashgabat. Founded in 2008, they play in the top division in Turkmenistan football, the Ýokary Liga. It has remained there ever since, winning the Turkmenistan Higher League championship seven times in a row. The club also won the 2009, 2015 and 2016 Turkmenistan Cup and has been regular in AFC Cup recently. The team plays in the Ashgabat Stadium.

Dmitri Ivanovich Khomukha is a Turkmenistani football manager and a former player who is the current manager of Russia national under-17 football team. He is Ukrainian by ethnicity and also has Russian citizenship.

Wahyt Sähetmyradowiç Orazsähedow is a Turkmenistani football forward who last played for FC Istiklol in Tajikistan. He is also a member of Turkmenistan national football team.

Football is the most popular sport in Uzbekistan, a country that gained independence in 1991. The national association takes part in all competitions organised by FIFA and the Asian Football Confederation. 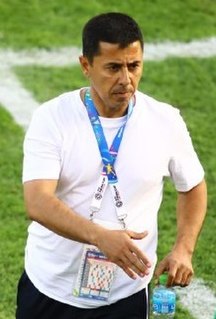 Yazguly Berdymuhammedovich Hojageldiyev is a Turkmen professional football coach and former player who is the current manager of Altyn Asyr.

Ahmet Didarovich Atayev is a Turkmen footballer who plays as a midfielder for Ýokary Liga club Altyn Asyr FK and the Turkmenistan national team.

Altymyrat Myratowiç Annadurdyýew is a professional Turkmen football player who played in FC Altyn Asyr. He is also a member of Turkmenistan national football team.

Ivan Daniliants or Danilianț is a Moldovan and Austrian professional association football coach and a former Soviet defender.