Football in the Comoros

Comoros joined the Confederation of African Football in 2003 following the formation of the Comoros Football Federation, the national football association, in 1979. Comoros were accepted as full members of FIFA in 2005. [1]

Following accession to FIFA's full member status, the Comoros national football team has competed for entry to the African Cup of Nations and World Cup since 2010; its qualifying campaigns for both competitions were unsuccessful.

At the highest level, the country's domestic competition consists of the Comoros Premier League and the Comoros Cup. Coin Nord is the country's most decorated club, having won the league title on six occasions. [2] [3]

The Togo national football team represents Togo in international football and is controlled by the Togolese Football Federation. The national football team of Togo made their debut in the FIFA World Cup in 2006. Their team bus underwent a fatal attack in Angola prior to the 2010 Africa Cup of Nations. They withdrew and were subsequently banned from the following two tournaments by the Confederation of African Football (CAF). In 2013 for the first time in history, Togo reached the quarter-finals of the Africa Cup of Nations. The team represents both FIFA and Confederation of African Football (CAF).

The Kenya national football team represents Kenya in international football. It is controlled by the Football Kenya Federation, the governing body football in Kenya, and competes as a member of the Confederation of African Football (CAF) and the Council for East and Central Africa Football Associations (CECAFA), a sub-confederation of CAF that has jurisdiction in East and Central Africa. The team is colloquially known as the Harambee Stars and plays its home games primarily at the Nyayo National Stadium in the country's capital, Nairobi. The team is yet to qualify for the FIFA World Cup competition.

John Obi Mikel is a Nigerian professional footballer who plays as a defensive midfielder for EFL Championship club Stoke City. 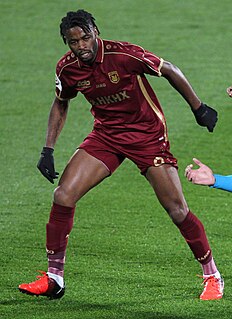 Alexandre Dimitri Song Billong, better known as Alex Song, is a Cameroonian professional footballer who plays for Djiboutian side Arta/Solar7 as a central or defensive midfielder. He can also play as a central defender.

The Fédération de Football des Comores (FFC) is the governing body of football in the Comoros. It was founded in 1979, affiliated to FIFA in 2005 and to CAF in 2003. It organizes the national football league and the national team. The first official international played in Comoros was played on the 17.11.2007 against Madagascar for the qualification of 2010 FIFA World Cup and the African Cup of Nation 2010.

The Senegalese Football Federation is the governing body of football in Senegal. It is based in the capital of Senegal, Dakar and was founded in 1960. The FSF aided in the development of football in Senegal, specifically for its professional and amateur leagues, youth and women's football and academies. Currently the FSF oversees the professional leagues, run by the Ligue Sénégalaise de Football Professionnel (LSFP) and fully organises the national teams, youth, women's and amateur football and all football administration.

Kagisho Evidence Dikgacoi is a retired South African professional footballer who is currently the manager of Witbank Spurs. He represented South Africa at international level.

Football is the most popular sport in Eritrea. After being under Ethiopian control, Eritrea gained its independence in 1991 and in 1998 the country became a member of FIFA.

Football is, followed by the second sport rugby union, the most popular sport in the African island nation of Madagascar. The sport is governed in the country by the Malagasy Football Federation.

Football is the most popular sport in Ethiopia. Although not one of the leading footballing nations in Africa, Ethiopia has produced some outstanding teams at both club and international level as well as some talented individual players.

Football is the most popular sport in Turkmenistan, a country that gained independence in 1991. The national association regularly takes part in competitions organised by FIFA and the AFC at senior and youth level. Valeri Nepomniachi is probably the most famous name in Turkmen football. He was the coach who led Cameroon to the 1990 FIFA World Cup in Italy. The Africans surprised many with their 1–0 win over defending champions Argentina in the opening match and finally bowed out in the quarter-finals. There are 40 clubs, 820 players, and 30 referees in the country. The major stadiums are: Köpetdag Stadium, Nabitchi, and The Builder.