Nagoya Mutual Bank lost its place in the League for a second time, this time to Towa Real Estate, which would become one of the biggest names in Japanese football as Fujita Engineering and Bellmare Hiratsuka, currently known as Shonan Bellmare .

Shonan Bellmare is a Japanese professional association football club currently playing in the J1 League. The team is located in Hiratsuka, in the west of Kanagawa Prefecture; their home stadium is Hiratsuka Athletics Stadium. Shonan refers to a coastal area along Sagami Bay that includes Hiratsuka. Bellmare is a portmanteau of the Italian words bello and mare, meaning "beautiful sea".

The 1965 season in Japanese football saw the formation of the Japan Soccer League, the first national league in Japan for football clubs. Eight teams took part in the championship, playing on a home and away basis. Toyo Industries were crowned the first ever champions, whilst Nagoya Mutual Bank came bottom and entered and end of season promotion/relegation match to stay in the top flight. They won this, 6:3 on aggregate against Nippon Kokan. 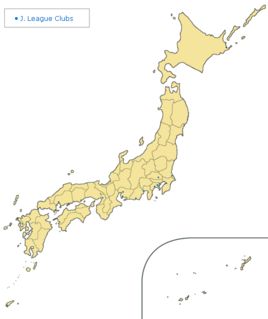 Statistics of Japanese Regional Leagues in the 1971 season.

This article documents statistics from the Emperor's Cup of the 1994 season.

Statistics of Emperor's Cup in the 1995 season.