Statistics of Japan Soccer League for the 1976 season.

Since Eidai dropped out of the league and folded in March 1977, Fujitsu was promoted, meaning no team was relegated.

Nissan promoted. Furukawa Chiba was not relegated due to Eidai's withdrawal.

Yokohama Flügels was a Japanese football club that played in the J.League between 1993 and 1998. The club was an original member of the J.League in 1993. In 1999 the club was officially merged with local rivals Yokohama Marinos and the two teams became known together as Yokohama F. Marinos. However, many Flügels fans refused to support the new Marinos and created their own club, Yokohama FC, as they felt that the Flügels had been dissolved rather than merged with. 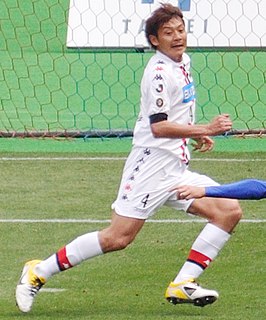 Statistics of Japan Soccer League for the 1978 season.

Hiroshi Hayano is a former Japanese football player and manager.

Yasuhiro Higuchi is a former Japanese football player and manager.

The 2014 season is Yokohama F. Marinos' 43rd season of competitive football – its thirty-third season in the top division of Japanese football and its fifteenth season under its current name, since the merger of Yokohama Marinos and Yokohama Flügels in 1999.

The 2016 Meiji Yasuda J2 League season is the 45th season of second-tier club football in Japan and the 18th season since the establishment of J2 League.

The 2016 Avispa Fukuoka season is the club's ninth season in the J1 League, they returned to the Japanese top flight after winning the 2015 J2 League playoffs. Avispa Fukuoka will also be competing in the J.League Cup and the Emperor's Cup.

The 2021 J1 League, also known as the 2021 Meiji Yasuda J1 League for sponsorship reasons, is the 29th season of the J1 League, the top Japanese professional league for association football clubs, since its establishment in 1993. The league began on 26 February and scheduled to end on 4 December 2021.