It was contested by 16 teams, and Honda won the championship. However, citing continuing corporate ownership, they were refused promotion by the J.League, who took in the runner-up, Vissel Kobe, instead.

The Azadegan League, also known as League 1, is the second highest division of professional football in Iran. It was the top-level football league in Iran from its foundation in 1991 until 2001, when the Persian Gulf Pro League was established. Each year, the top finishing teams in the Azadegan League are promoted to the Persian Gulf Pro League, and the lowest finishing teams are relegated to League 2.

Will Robson Emilio Andrade is a former Brazilian football player.

The 2006 J.League Division 1 season was the 14th season since the establishment of the J.League. It began on March 4 and ended on December 2.

The 2005 season was the 13th season since the establishment of J.League. It began on March 5 and ended on December 3, followed by promotion/relegation series matches on December 7 and 10.

The 2007 J.League Division 1 season was the 15th season since the establishment of the J.League. The season began on March 3 and ended on December 1.

The 1995-96 Croatian First Football League was the fifth season of the Croatian top-level league since its establishment. The season started on 13 August 1995 and concluded on 26 May 1996. This was the first season to feature separate A- and B- leagues, with a complicated two-stage format to the season.

The 1996 S.League was the 1st season of the S.League, the top professional football league in Singapore. 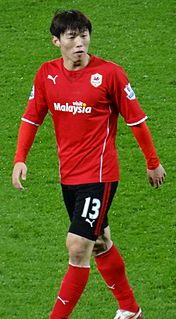 Kim Bo-Kyung is a South Korean professional footballer who plays as a midfielder for Korean club Jeonbuk Hyundai Motors.