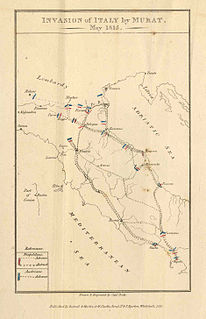 Castel di Sangro is a city and comune of 6,461 people in the Province of L'Aquila, in Abruzzo, Central Italy. It is the main city of the Alto Sangro e Altopiano delle Cinque Miglia area.

Following defeat at the Battle of Tolentino, the 4th Division of the Neapolitan army, commanded by General Pignatelli Cerchiara had detached from the main army under their king, Joachim Murat, and were retreating south. The commander of the Austrian force, Frederick Bianchi, dispatched his advanced guard, consisting of Hungarian hussars and Tyrolean jägers, in pursuit. The Austrians finally caught up with the Neapolitans on 13 May in the town of Castel di Sangro. Seeing the hussars, the Neapolitans formed squares. However, during the cause of the disastrous campaign, the 4th Division had been reduced to less than 2,000 men. The hussars broke the Neapolitan square and sent the remaining troops into disarray. 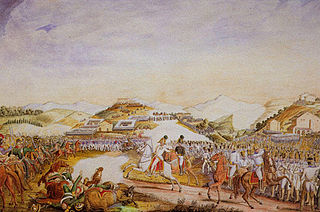 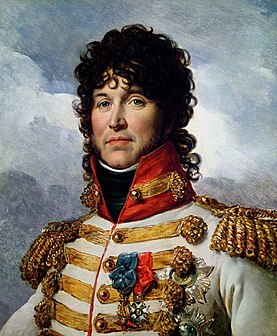 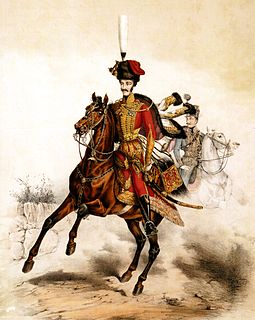 A hussar was a member of a class of light cavalry, originating in Central Europe during the 15th and 16th centuries. The title and distinctive dress of these horsemen were subsequently widely adopted by light cavalry regiments in European armies in the late 17th and early 18th centuries. 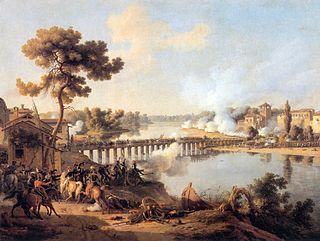 The Battle of Lodi was fought on 10 May 1796 between French forces under Napoleon Bonaparte and an Austrian rear guard led by Karl Philipp Sebottendorf at Lodi, Lombardy. The rear guard was defeated, but the main body of Johann Peter Beaulieu's Austrian Army had time to retreat. 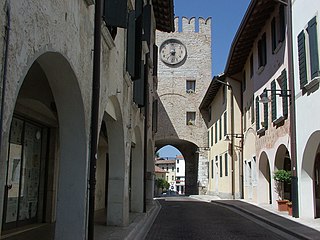 The Battle of Sacile on 16 April 1809 and its companion Clash at Pordenone on 15 April saw an Austrian army commanded by Archduke John of Austria defeat a Franco-Italian army led by Eugène de Beauharnais and force it to retreat. Sacile proved to be the most notable victory of John's career. The action took place east of the Livenza River near Sacile in modern-day Italy during the War of the Fifth Coalition, part of the Napoleonic Wars.

Castel di Sangro Calcio is an Italian association football club from Castel di Sangro in the Province of L'Aquila, Abruzzo. They play in Promozione. Their moment of greatness came in 1996, when they were promoted to Serie B, a noteworthy accomplishment for a team coming from a town of only 5,500 residents. Even greater, they were able to survive in that league another year. The story of their first season in Serie B is chronicled in the book The Miracle of Castel di Sangro by Joe McGinniss. The team played at the 7,220 seat Stadio Teofilo Patini in Castel di Sangro. The team's colours are red and yellow.

Siege of Ancona was a battle in the Neapolitan War. It took place beginning on the 5th May 1815 and persisted until the 30th May 1815. The battle took place mere days after the Battle of Tolentino on the 3rd May 1815.

The Battle of Campo Tenese saw two divisions of the Imperial French Army of Naples led by Jean Reynier attack the left wing of the Royal Neapolitan Army under Roger de Damas. Though the defenders were protected by field fortifications, a French frontal attack combined with a turning movement rapidly overran the position and routed the Neapolitans with heavy losses. The action occurred at Campotenese, a little mountain village in the municipality of Morano Calabro in the north of Calabria. The battle was fought during the War of the Third Coalition, part of the Napoleonic Wars. 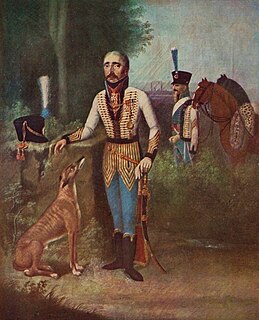 François Xavier de Schwarz or François-Xavier-Nicolas Schwartz was born in Baden but joined the French army in 1776. He became a cavalry officer during the French Revolutionary Wars, fighting with the 2nd Hussar Regiment in numerous actions including Jemappes, Fleurus, and Neuwied. After being captured in an abortive invasion of Ireland, he was promoted to command the 5th Hussar Regiment. He led the unit in the War of the Second Coalition, most notably at Hohenlinden and in the subsequent pursuit of the Austrians.

The Battle of Faenza or Battle of Castel Bolognese on 3 or 4 February 1797 saw a 7,000-man force from the Papal States commanded by Michelangelo Alessandro Colli-Marchi who faced a 9,000-strong French corps under Claude Victor-Perrin. The veteran French troops decisively defeated the Papal army, inflicting disproportionate casualties. The town of Castel Bolognese is located on the banks of the Senio River 40 kilometres (25 mi) southeast of Bologna. The city of Faenza is also nearby. The action took place during the War of the First Coalition, part of the French Revolutionary Wars.