A chatelaine is a decorative belt hook or clasp worn at the waist with a series of chains suspended from it. Each chain is mounted with useful household appendages such as scissors, thimbles, watches, keys, vinaigrette, and household seals. [1]

The remnants of chatelaines and chatelaine bags have been found in the graves of females in the seventh and eighth century in the United Kingdom. Often found with the chatelaine artifacts would be wire rings, beads, buckles, knives and tools. [4]

Chatelaine bags refer to bags suspended from a waistband by cord or chain, which were popular from the 1860s to the end of the 19th century. [5]

Chatelaines were worn by many housekeepers in the 19th century [6] and in the 16th century Dutch Republic,[ citation needed ] where they were typically used as watch chains for the most wealthy. Similar jewelry was also worn by Anglo-Saxon women, as seen from the burial record, but their function is uncertain.

The chatelaine was also used as a woman's keychain in the 19th century to show the status of women in a household. The woman with the keys to all the many desks, chest of drawers, food hampers, pantries, storage containers, and many other locked cabinets was "the woman of the household". As such, she was the one who would direct the servants, housemaids, cooks and delivery servicemen and would open or lock the access to the valuables of the house, possessing total authority over who had access to what. Frequently, this hostess was the senior woman of the house. When a woman married and moved into her father-in-law's house, her husband's mother would usually hold on to the keys. However, if the mother became a widow, the keys and their responsibilities and status were often passed to the oldest son's wife. Younger women and daughters in the house often wanted the appearance of this responsibility, and would often wear decorative chatelaines with a variety of small objects in the place of keys, especially bright and glittering objects that could be used to start a conversation. [8] In the case of the absence of a woman of the house, the controller of the keys was often a hired housekeeper. 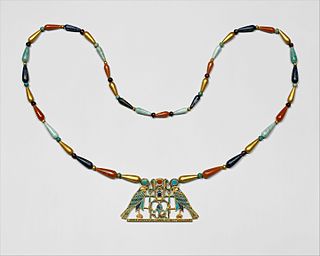 Jewellery or jewelry consists of decorative items worn for personal adornment, such as brooches, rings, necklaces, earrings, pendants, bracelets, and cufflinks. Jewellery may be attached to the body or the clothes. From a western perspective, the term is restricted to durable ornaments, excluding flowers for example. For many centuries metal such as gold used in different carats from 21, 18, 12, 9 or even lower, often combined with gemstones, has been the normal material for jewellery, but other materials such as shells and other plant materials may be used. It is one of the oldest type of archaeological artefact – with 100,000-year-old beads made from Nassarius shells thought to be the oldest known jewellery. The basic forms of jewellery vary between cultures but are often extremely long-lived; in European cultures the most common forms of jewellery listed above have persisted since ancient times, while other forms such as adornments for the nose or ankle, important in other cultures, are much less common. 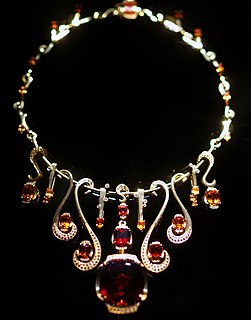 A necklace is an article of jewellery that is worn around the neck. Necklaces may have been one of the earliest types of adornment worn by humans. They often serve ceremonial, religious, magical, or funerary purposes and are also used as symbols of wealth and status, given that they are commonly made of precious metals and stones.

Chatelaine, from the French term châtelaine, has the following meanings: 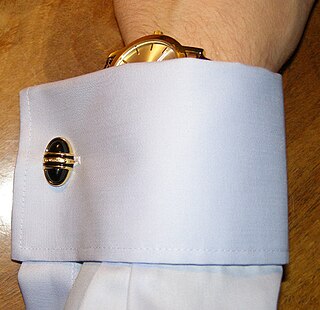 Cufflinks are items of jewelry that are used to secure the cuffs of dress shirts. Cufflinks can be manufactured from a variety of different materials, such as glass, stone, leather, metal, precious metal or combinations of these. Securing of the cufflinks is usually achieved via toggles or reverses based on the design of the front section, which can be folded into position. There are also variants with chains or a rigid, bent rear section. The front sections of the cufflinks can be decorated with gemstones, inlays, inset material or enamel and designed in two or three-dimensional forms.

The Victorian slide bracelet was a fashion accessory formerly worn by many women in nineteenth century England. Before the creation of the wrist watch, Victorian women wore their time piece on a neck chain that stayed in place with a decorative station that supported the watch. With a variety of these "stations" to wear with different outfits, they needed some use for all that jewelry after the wrist watch came into fashion. 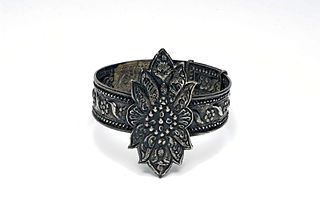 An arm ring, also known as an armlet or an armband, is a band of metal, usually a precious metal, worn as jewelry or an ornament around the biceps of the upper arm. The arm ring is similar to a bracelet or bangle, though it must be shaped and sized to fit snugly to the upper arm. 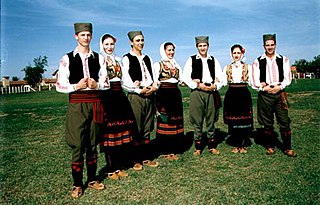 Serbian traditional clothing, also called as Serbian national costume or Serbian dress, refers to the traditional clothing worn by Serbs living in Serbia, Croatia, Bosnia and Herzegovina, Montenegro, and the extended Serbian diaspora communities in Austra, Australia, Bulgaria, Canada, France, Germany, Greece, Hungary, North Macedonia, Romania, Russia, Slovenia, United States, etc. Like any traditional dress of a nation or culture, it has been lost to the advent of urbanization, industrialization, and the growing market of international clothing trends. The wide range of regional folk costumes show influence from historical Austrian, Hungarian, German, Italian, and Ottoman Turkish presence. Nonetheless, the costumes are still a pinnacle part of Serbian folk culture. From the 19th century and onwards, Serbs have adopted western-styled clothing. This change has started in larger settlements such as cities and towns, although it was not uncommon to see rural women in traditional working costumes all the way until the end of President Josip Broz Tito's term. Today, these national costumes are only worn by some elderly in rural areas but are most often worn with connection to special events and celebrations, mostly at ethnic festivals, religious and national holidays, weddings, tourist attractions, and by dancing groups who dance the traditional Serbian kolo, or circle dance. 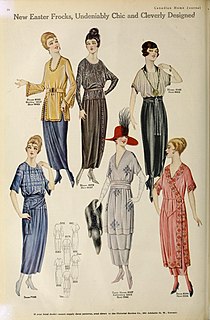 The 1920s in Western fashion saw a modernization. For women, fashion had continued to change away from the extravagant and restrictive styles of the Victorian and Edwardian periods, and towards looser clothing which revealed more of the arms and legs, that had begun at least a decade prior with the rising of hemlines to the ankle and the movement from the S-bend corset to the columnar silhouette of the 1910s. Men also began to wear less formal daily attire and athletic clothing or 'Sportswear' became a part of mainstream fashion for the first time. The 1920s are characterized by two distinct periods of fashion: in the early part of the decade, change was slower, and there was more reluctance to wear the new, revealing popular styles. From 1925, the public more passionately embraced the styles now typically associated with the Roaring Twenties. These styles continued to characterize fashion until the worldwide depression worsened in 1931. 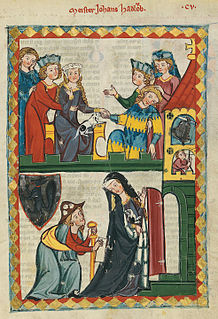 Fashion in fourteenth-century Europe was marked by the beginning of a period of experimentation with different forms of clothing. Costume historian James Laver suggests that the mid-14th century marks the emergence of recognizable "fashion" in clothing, in which Fernand Braudel concurs. The draped garments and straight seams of previous centuries were replaced by curved seams and the beginnings of tailoring, which allowed clothing to more closely fit the human form. Also, the use of lacing and buttons allowed a more snug fit to clothing. 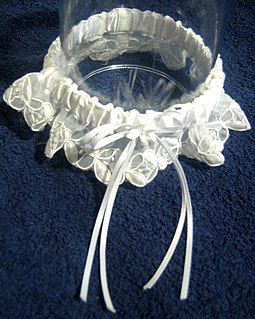 A garter is an article of clothing comprising a narrow band of fabric fastened about the leg to keep up stockings. In the eighteenth to twentieth centuries, they were tied just below the knee, where the leg is most slender, to keep the stocking from slipping. The advent of elastic has made them less necessary from this functional standpoint, although they are still often worn for fashion. Garters have been widely worn by men and women, depending on fashion trends. 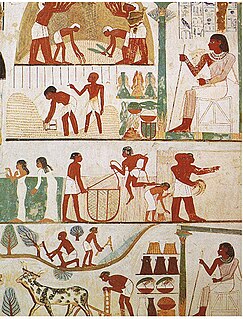 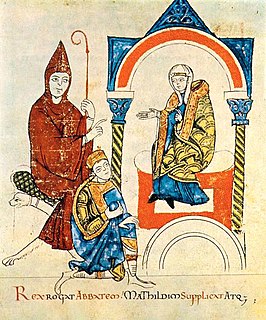 Twelfth century European fashion was simple and differed only in details from the clothing of the preceding centuries. Men wore knee-length tunics for most activities, and men of the upper classes wore long tunics, with hose and mantle or cloaks. Women wore long tunics or dresses. A close fit to the body, full skirts, and long flaring sleeves were characteristic of upper-class fashion for both men and women. 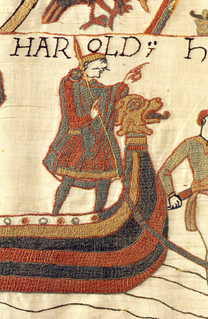 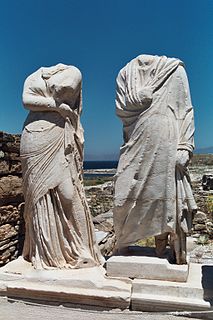 Clothing in ancient Greece primarily consisted of the chiton, peplos, himation, and chlamys. Ancient Greek men and women typically wore two pieces of clothing draped about the body: an undergarment and a cloak.

The Medieval period in England is usually classified as the time between the fall of the Roman Empire to the beginning of the Renaissance, roughly the years' AD 410–1485. For various peoples living in England, the Anglo-Saxons, Anglo-Danes, Normans and Britons, clothing in the medieval era differed widely for men and women as well as for different classes in the social hierarchy. The general styles of Early medieval European dress were shared in England. In the later part of the period, men's clothing changed much more rapidly than women's styles. Clothes were very expensive and both the men and women of lower social classes continued to wear them until the garments were in such disrepair that they needed to be replaced entirely. Sumptuary laws also divided social classes by regulating the colors and styles these various ranks were permitted to wear. In the early Middle Ages, clothing was typically simple and, particularly in the case of lower-class peoples, served only basic utilitarian functions such as modesty and protection from the elements. As time went on the advent of more advanced textile techniques and increased international relations, clothing gradually got more and more intricate and elegant, even with those under the wealthy classes, up into the renaissance.

The Middle Ages was a period that spanned approximately 1000 years and is normally restricted to Europe and the Byzantine Empire. The material remains we have from that time, including jewelry, can vary greatly depending on the place and time of their creation, especially as Christianity discouraged the burial of jewellery as grave goods, except for royalty and important clerics, who were often buried in their best clothes and wearing jewels. The main material used for jewellery design in antiquity and leading into the Middle Ages was gold. Many different techniques were used to create working surfaces and add decoration to those surfaces to produce the jewellery, including soldering, plating and gilding, repoussé, chasing, inlay, enamelling, filigree and granulation, stamping, striking and casting. Major stylistic phases include barbarian, Byzantine, Carolingian and Ottonian, Viking, and the Late Middle Ages, when Western European styles became relatively similar. 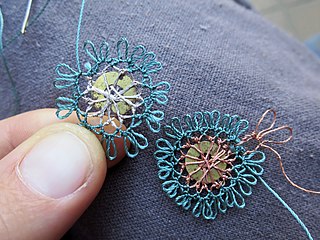 Oya, “Turkish lace”, is a Turkish word that means various forms of narrow lace trimmings, that is worn throughout the eastern and southern parts of the Mediterranean region, as well as Armenia. It is thought to date back as far as the 8th century BC, to the Phrygians of Anatolia. Some argue that the needlework and the decorate edging spread from 12th century Anatolia to Greece and from there via Italy to Europe. Oya appears in various forms and motifs, with the most beautiful examples made by aristocratic, urban and experienced women in the Ottoman palace. Today, it is still very popular among the Turkish elite and is highly sought after and very collectible. The craft of oya is a unique language for Turkish women.