A clockmaker is an artisan who makes and/or repairs clocks. Since almost all clocks are now factory-made, most modern clockmakers only repair clocks. Modern clockmakers may be employed by jewellers, antique shops, and places devoted strictly to repairing clocks and watches. Clockmakers must be able to read blueprints and instructions for numerous types of clocks and time pieces that vary from antique clocks to modern time pieces in order to fix and make clocks or watches. The trade requires fine motor coordination as clockmakers must frequently work on devices with small gears and fine machinery.[ citation needed ]

Originally, clockmaker were master craftsmen who designed and built clocks by hand. Since modern clockmakers are required to repair antique, handmade or one-of-a-kind clocks for which parts are not available, they must have some of the design and fabrication abilities of the original craftsmen. A qualified clockmaker can typically design and make a missing piece for a clock without access to the original component.

Clockmakers generally do not work on watches; the skills and tools required are different enough that watchmaking is a separate field, handled by another specialist, the watchmaker.

The earliest use of the term clokkemaker is said to date from 1390, about a century after the first mechanical clocks appeared. [1] From the beginning in the 15th century through the 17th century, clockmaking was considered the "leading edge", most technically advanced trade existing. Historically, the best clockmakers often also built scientific instruments, as for a long time they were the only craftsmen around trained in designing precision mechanical apparatus. In one example, the harmonica was invented by a young German clockmaker, which was then mass-produced by another clockmaker, Matthias Hohner.

Prior to 1800 clocks were entirely handmade, including all their parts, in a single shop under a master clockmaker. Examples of these complex movements can be seen in the many longcase clocks constructed in the 16th and 17th centuries. By the 19th century, clock parts were beginning to be made in small factories, but the skilled work of designing, assembling, and adjusting the clock was still done by clockmaking shops. By the 20th century, interchangeable parts and standardized designs allowed the entire clock to be assembled in factories, and clockmakers specialized in repair of clocks.

As the art of making clocks became more widespread and distinguished, guilds specifically for this trade emerged around the sixteenth century. One of the first guilds developed in London, England, known as the Worshipful Company of Clockmakers; the group formed after a small number of foreign-trained clockmakers spent time working in London. [2] A requirement of joining the guild was to practise their craft and gain as much experience as possible, along with joining one of many other trade guilds, such as the Blacksmiths, Stationers, or Drapers Company. There are many guilds where clockmakers meet to buy, sell and get clocks to repair from customers, the IWJG is one of the most prominent in the world.

Early clockmakers fashioned all the intricate parts and wheelwork of clocks by hand, using hand tools. They developed specialized tools to help them. [3]

Clockmaker is also the name of several movies. [4]

Deists often call God the "Clockmaker".[ who? ] The Temple of the Great Clockmaker, in the novel The Case Of The Dead Certainty by Kel Richards, is a temple which represents deism.

The Clock Maker Theory and the watchmaker analogy describe by way of analogy religious, philosophical, and theological opinions about the existence of god(s) that have been expressed over the years.

During the 1800s and 1900s, clocks or watches were carried around as a form of flaunting social status. They were also a way of instilling a sense of time regulation for work in the budding industrial market.

In 2004, Jim Krueger wrote a comic book entitled The Clock Maker, published by German publisher Image Publishing, that focuses on the life of a clockmaker.

Artist Tony Troy creates the Illustration titled "The Clockmaker" in 2003 for his Broadway musical "The Fluteplayer's Song". [5]

Horology is the study of the measurement of time. Clocks, watches, clockwork, sundials, hourglasses, clepsydras, timers, time recorders, marine chronometers, and atomic clocks are all examples of instruments used to measure time. In current usage, horology refers mainly to the study of mechanical time-keeping devices, while chronometry more broadly includes electronic devices that have largely supplanted mechanical clocks for the best accuracy and precision in time-keeping. 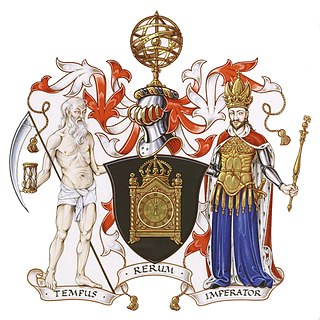 The Worshipful Company of Clockmakers was established under a Royal Charter granted by King Charles I in 1631. It ranks sixty-first among the livery companies of the City of London, and comes under the jurisdiction of the Privy Council. The company established a library and its Museum in 1813, which is the oldest specific collection of clocks and watches worldwide. This is administered by the company's affiliated charity, the Clockmakers’ Charity, and is presently housed on the second floor of London's Science Museum. The modern aims of the company and its Museum are charitable and educational, in particular to promote and preserve clockmaking and watchmaking, which as of 2019 were added to the HCA Red List of Endangered Crafts. 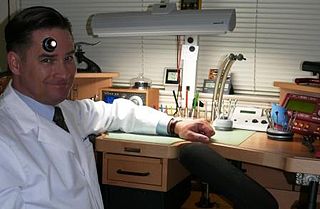 A watchmaker is an artisan who makes and repairs watches. Since a majority of watches are now factory made, most modern watchmakers only repair watches. However, originally they were master craftsmen who built watches, including all their parts, by hand. Modern watchmakers, when required to repair older watches, for which replacement parts may not be available, must have fabrication skills, and can typically manufacture replacements for many of the parts found in a watch. The term clockmaker refers to an equivalent occupation specializing in clocks.

A mainspring is a spiral torsion spring of metal ribbon—commonly spring steel—used as a power source in mechanical watches, some clocks, and other clockwork mechanisms. Winding the timepiece, by turning a knob or key, stores energy in the mainspring by twisting the spiral tighter. The force of the mainspring then turns the clock's wheels as it unwinds, until the next winding is needed. The adjectives wind-up and spring-powered refer to mechanisms powered by mainsprings, which also include kitchen timers, metronomes, music boxes, wind-up toys and clockwork radios.

A Roskopf, pin-lever, or pin-pallet escapement is an inexpensive, less accurate version of the lever escapement, used in mechanical alarm clocks, kitchen timers, mantel clocks and, until the 1970s, cheap watches now known as pin lever watches. It was patented by German watchmaker Georges Frederic Roskopf in 1867, suggested to Roskopf by Jules Grossmann. 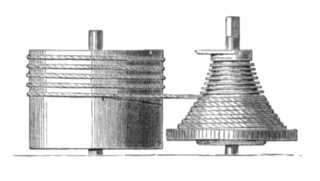 Used in antique spring-powered mechanical watches and clocks, a fusee is a cone-shaped pulley with a helical groove around it, wound with a cord or chain which is attached to the mainspring barrel. Fusees were used from the 15th century to the early 20th century to improve timekeeping by equalizing the uneven pull of the mainspring as it ran down. Gawaine Baillie stated of the fusee, "Perhaps no problem in mechanics has ever been solved so simply and so perfectly." 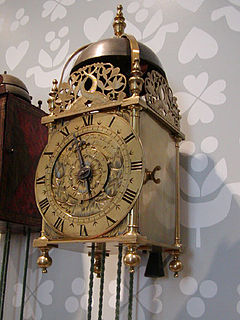 A lantern clock is a type of antique weight-driven wall clock, shaped like a lantern. They were the first type of clock widely used in private homes. They probably originated before 1500 but only became common after 1600; in Britain around 1620. They became obsolete in the 19th century.

The Clockmakers’ Museum in London, England, is believed to be the oldest collection specifically of clocks and watches in the world. The collection belongs to and is administered by the Clockmakers’ Charity, affiliated to the Worshipful Company of Clockmakers, founded in 1631 by Royal Charter. Since 2015 it has been housed in a gallery provided by the Science Museum in South Kensington, having formerly been located in the Guildhall complex in the City of London since 1874, where it first opened to the public. Admission is free.

Thomas Tompion (1639–1713) was an English clockmaker, watchmaker and mechanician who is still regarded to this day as the "Father of English Clockmaking". Tompion's work includes some of the most historic and important clocks and watches in the world, and can command very high prices whenever outstanding examples appear at auction. A plaque commemorates the house he shared on Fleet Street in London with his equally famous pupil and successor George Graham. 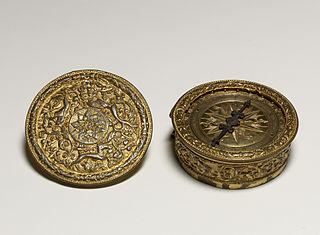 The history of watches began in 16th century Europe, where watches evolved from portable spring-driven clocks, which first appeared in the 15th century. The watch which developed from the 16th century to the mid 20th century was a mechanical device, powered by winding a mainspring which turned gears and then moved the hands, and kept time with a rotating balance wheel. The invention of the quartz watch in the 1960s, which ran on electricity and kept time with a vibrating quartz crystal, proved a radical departure for the industry. During the 1980s quartz watches took over the market from mechanical watches, an event referred to as the "quartz crisis". Although mechanical watches still sell at the high end of the market, the vast majority of watches now have quartz movements. 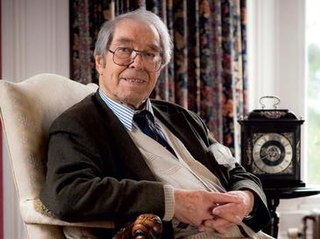 George Daniels, CBE, DSc, FBHI, FSA, AHCI was an English horologist who was considered by some to be one of the best in the world in the field of luxury mechanical watches and timepieces during his lifetime. He was a watchmaker who built complete watches by hand. But it was his creation of the coaxial escapement for which he is most remembered. The movement, which theoretically removed the need to add a lubricant, has been used by Omega in most of their collections since 1999 except of the Speedmaster Moonwatch.

The American Watchmakers-Clockmakers Institute (AWCI) is a not-for-profit trade association based in the United States that is dedicated to the advancement of the modern watch industry, from which it receives a significant portion of its funding. While the AWCI is an American organization, it also has members throughout the world.

The British Horological Institute is the representative body of the horological industry in the United Kingdom. It was founded by a group of clockmakers in 1858, and has its current premises at Upton Hall in Nottinghamshire, which includes a museum of clock history.

The Antiquarian Horological Society, abbreviated to AHS, is the UK-based learned society for scholars and enthusiasts of horology. Its administrative office is at 4 Lovat Lane, a listed building close to the Monument, in the City of London. In early 2016, the Society appointed Dr Patricia Fara of Clare College, Cambridge as its new president, following the untimely death of its previous president Professor Lisa Jardine. The Chairman is Dr James Nye.

Daniel Quare was an English clockmaker and instrument maker who Invented a repeating watch movement in 1680 and a portable barometer in 1695.

Jean-Antoine Lépine, born as Jean-Antoine Depigny, was an influential watchmaker. He contributed inventions which are still used in watchmaking today and was amongst the finest French watchmakers, who were contemporary world leaders in the field. 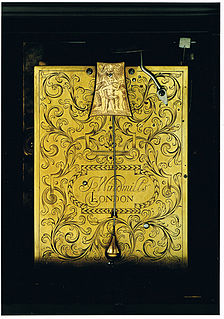 Joseph Windmills (c1640-1724), was an eminent London watch- and clockmaker who, with his son Thomas, produced outstanding timepieces between 1671 and 1737.

Charles Gretton was a prominent clock and watchmaker during the golden age of English clockmaking. 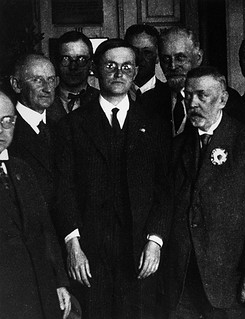 The Dingwall Beloe Lecture Series is the result of bequests by Dr Eric Dingwall, formerly an Assistant Keeper of Printed Books in the British Museum, and to the Clockmakers Company by Reginald Beloe TD, the noted horological collector and Master of the Company in 1977.