The court was first established by the Constitution of 1991, and its first session began in March 1992. The court is housed within the shared judicial complex of the Palace of Justice located on the north side of Bolívar Square in the La Candelaria neighbourhood of Bogotá.

The Constitutional Court consists of nine magistrates who are elected by the Senate of Colombia from ternary lists drawn up by the President, the Supreme Court of Justice, and the Council of State. The magistrates serve for a term of eight years. The court is headed by a President and Vice President.

The Supreme Court of Argentina is the highest court of law of the Argentine Republic. It was inaugurated on 15 January 1863. However, during much of the 20th century, the Court and the Argentine judicial system in general, has lacked autonomy from the executive power. The Court has recently been reformed by the decree 222/03.

Carlos Emilio Gaviria Díaz was a Colombian lawyer, professor and politician. He served as the 5th Chief Magistrate of the Constitutional Court of Colombia, where he served as a Magistrate from 1993 to 2001. After retiring from the Court, he went into politics becoming a Senator of Colombia in 2002, and running for President as an Alternative Democratic Pole candidate in the 2006 presidential election, ultimately losing to ex-president Álvaro Uribe Vélez, who was seeking his second term in office.

Universidad del Rosario is a Colombian university founded on Roman Catholic principles, in 1653 by Fray Cristobal de Torres. Located in Bogotá, due to its important place in Colombian history, it is known as "the Cradle of the Republic". Most faculties reside at the Cloister, the main campus located in the historic-geographical centre of Bogotá. It also included a private all-male traditional primary and secondary school until 2008. 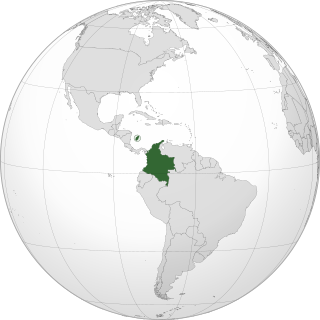 Lesbian, gay, bisexual, and transgender (LGBT) rights in Colombia are among the most advanced in Latin America, and have substantially progressed since consensual homosexual activity was decriminalized in 1981. Between February 2007 and April 2008, three rulings of the Constitutional Court granted registered same-sex couples the same pension, social security and property rights as registered heterosexual couples. In 2011, Congress passed a law banning discrimination based on sexual orientation, and on 28 April 2016, the Constitutional Court legalized same-sex marriage, making Colombia the fourth South American country to legalize it.

The judiciary of Colombia is a branch of the State of Colombia that interprets and applies the laws of Colombia, to ensure equal justice under law, and to provide a mechanism for dispute resolution. The judiciary comprises a hierarchical system of courts presided over by judges, magistrates and other adjudicators.

The Supreme Court of Costa Rica is the court of greater hierarchy of Law and Justice in Costa Rica.

María Victoria Calle Correa is a Magistrate of the Constitutional Court of Colombia, serving since April 2009. Calle is the second female magistrate. A lawyer from the University of Medellín, she specialized in Administrative Law from Saint Thomas Aquinas University and the University of Salamanca, and received a Master's in Administrative Law from Externado University. Prior to her nomination, she worked in Previsora Seguros S.A., and insurance provider, since 2004, and was its Vice President of Legal Affairs since 2005.

The Constitutional Court of Guatemala is the highest court for civil law in the Republic of Guatemala. It is tasked with preserving the constitutional order by ruling on questions of the constitutionality of laws or state actions. The Court is normally composed of five titular or primary magistrates who serve five year terms. Each titular magistrate is appointed with a substitute. In special cases two substitutes are added to the bench for a total of seven to hear that case. Each titular member serves for one year as the president of the court.

The Supreme Tribunal of Justice of Venezuela (TSJ) in exile is an institution that some, including the Organization of American States, consider to be the legitimate highest court of law in Venezuela and the head of the judicial branch, as opposed to the Supreme Tribunal of Justice (Venezuela). It was established on 21 July 2017 following the 2017 Venezuelan constitutional crisis. The TSJ's 33 members have been based in Chile, Colombia, Panama, and the United States due to the political crisis in Venezuela.

José Luis Barceló Camacho is a Colombian lawyer and academic, who is the current president of the Supreme Court of Justice of Colombia. 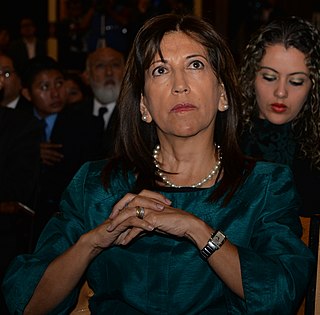 Martha Lucía Zamora Ávila is a Colombian lawyer and politician. She served as Attorney General of Colombia from 5 to 29 March 2012, after the resignation of Viviane Morales.