Contrast-to-noise ratio (CNR) [1] is a measure used to determine image quality. CNR is similar to the metric signal-to-noise ratio (SNR), but subtracts a term before taking the ratio. This is important when there is a significant bias in an image, such as from haze. [2] As can be seen in the picture at right, the intensity is rather high even though the features of the image are washed out by the haze. Thus this image may have a high SNR metric, but will have a low CNR metric.

where SA and SB are signal intensities for signal producing structures A and B in the region of interest and σo is the standard deviation of the pure image noise. 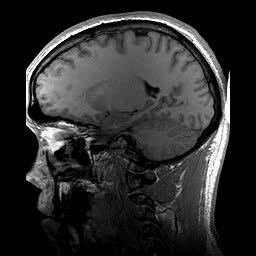 Image registration is the process of transforming different sets of data into one coordinate system. Data may be multiple photographs, data from different sensors, times, depths, or viewpoints. It is used in computer vision, medical imaging, military automatic target recognition, and compiling and analyzing images and data from satellites. Registration is necessary in order to be able to compare or integrate the data obtained from these different measurements. 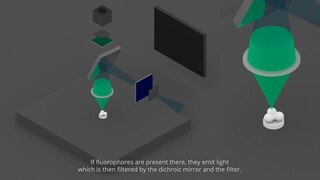 Confocal microscopy, most frequently confocal laser scanning microscopy (CLSM) or laser confocal scanning microscopy (LCSM), is an optical imaging technique for increasing optical resolution and contrast of a micrograph by means of using a spatial pinhole to block out-of-focus light in image formation. Capturing multiple two-dimensional images at different depths in a sample enables the reconstruction of three-dimensional structures within an object. This technique is used extensively in the scientific and industrial communities and typical applications are in life sciences, semiconductor inspection and materials science.

Peak signal-to-noise ratio (PSNR) is an engineering term for the ratio between the maximum possible power of a signal and the power of corrupting noise that affects the fidelity of its representation. Because many signals have a very wide dynamic range, PSNR is usually expressed as a logarithmic quantity using the decibel scale.

Contrast resolution is the ability to distinguish between differences in intensity in an image. The measure is used in medical imaging to quantify the quality of acquired images. It is a difficult quantity to define because it depends on the human observer as much as the quality of the actual image. For example, the size of a feature affects how easily it is detected by the observer.

Compressed sensing is a signal processing technique for efficiently acquiring and reconstructing a signal, by finding solutions to underdetermined linear systems. This is based on the principle that, through optimization, the sparsity of a signal can be exploited to recover it from far fewer samples than required by the Nyquist–

Fellgett's advantage or the multiplex advantage is an improvement in signal to noise ratio that is gained when taking multiplexed measurements rather than direct measurements. The name is derived from P. B. Fellgett, who first made the observation as part of his PhD. When measuring a signal whose noise is dominated by detector noise, a multiplexed measurement such as the signal generated by a Fourier transform spectrometer can produce a relative improvement in signal-to-noise ratio (SNR), compared to an equivalent scanning monochromator, of the order of the square root of m, where m is the number of sample points comprising the spectrum.

Signal-to-noise ratio (SNR) is used in imaging to characterize image quality. The sensitivity of a imaging system is typically described in the terms of the signal level that yields a threshold level of SNR.

The detective quantum efficiency is a measure of the combined effects of the signal and noise performance of an imaging system, generally expressed as a function of spatial frequency. This value is used primarily to describe imaging detectors in optical imaging and medical radiography.

Stochastic resonance is a phenomenon that occurs in a threshold measurement system when an appropriate measure of information transfer is maximized in the presence of a non-zero level of stochastic input noise thereby lowering the response threshold; the system resonates at a particular noise level.

Quantum microscopy allows microscopic properties of matter and quantum particles to be measured and imaged. Various types of microscopy use quantum principles. The first microscope to do so was the scanning tunneling microscope, which paved the way for development of the photoionization microscope and the quantum entanglement microscope.

Kinetic imaging is an imaging technology developed by Szabolcs Osváth and Krisztián Szigeti in the Department of Biophysics and Radiation Biology at Semmelweis University. The technology allows the visualization of motion; it is based on an altered data acquisition and image processing algorithm combined with imaging techniques that use penetrating radiation. Kinetic imaging has the potential for use in a wide variety of areas including medicine, engineering, and surveillance. For example, physiological movements, such as the circulation of blood or motion of organs can be visualized using kinetic imaging. Because of the reduced noise and the motion-based image contrast, kinetic imaging can be used to reduce X-ray dose and/or amount of required contrast agent in medical imaging. In fact, clinical trials are underway in the fields of vascular surgery and interventional radiology. Non-medical applications include non-destructive testing of products and port security scanning for stowaway pests.

Photon-counting computed tomography (CT) is a computed tomography technique currently under research and development, both within academia and by major vendors of CT systems. Photon-counting CT has the potential both to offer significant improvements to existing CT imaging techniques and to make possible completely novel applications. A photon-counting CT system employs a photon-counting detector (PCD) which registers the interactions of individual photons. By keeping track of the deposited energy in each interaction, the detector pixels of a PCD each record an approximate energy spectrum, making it a spectral or energy-resolved CT technique. In contrast, typical CT scanners use energy-integrating detectors (EIDs), where the total energy deposited in a pixel during a fixed period of time is registered. Typical CT detectors thus register only photon intensity, comparable to black-and-white photography, whereas photon-counting detectors register also spectral information, similar to colour photography.

Coherent Raman scattering (CRS) microscopy is a multi-photon microscopy technique based on Raman-active vibrational modes of molecules. The two major techniques in CRS microscopy are stimulated Raman scattering (SRS) and coherent anti-Stokes Raman scattering (CARS). SRS and CARS were theoretically predicted and experimental realized in the 1960s. In 1982 the first CARS microscope was demonstrated. In 1999, CARS microscopy using a collinear geometry and high numerical aperture objective were developed in Xiaoliang Sunney Xie's lab at Harvard University. This advancement made the technique more compatible with modern laser scanning microscopes. Since then, CRS's popularity in biomedical research started to grow. CRS is mainly used to image lipid, protein, and other bio-molecules in live or fixed cells or tissues without labeling or staining. CRS can also be used to image samples labeled with Raman tags, which can avoid interference from other molecules and normally allows for stronger CRS signals than would normally be obtained for common biomolecules. CRS also finds application in other fields, such as material science and environmental science. 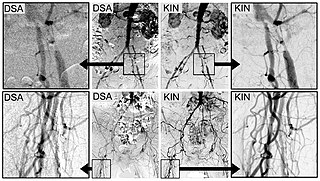 Digital variance angiography (DVA) is a novel image processing method based on kinetic imaging, which allows the visualization of motion on image sequences generated by penetrating radiations. DVA is a specific form of kinetic imaging: it requires angiographic image series, which are created by X-ray or fluoroscopic imaging and by the administration of contrast media during various medical procedures. The resulting single DVA image visualizes the path of contrast agent with relatively low background noise.