Digitally modulated signals (e.g. QAM or PSK) are basically made of two CW carriers (the I and Q components, which are out-of-phase carriers). In fact, the information (bits or symbols) is carried by given combinations of phase and/or amplitude of the I and Q components. It is for this reason that, in the context of digital modulations, digitally modulated signals are usually referred to as carriers. Therefore, the term carrier-to-noise-ratio (CNR), instead of signal-to-noise-ratio (SNR), is preferred to express the signal quality when the signal has been digitally modulated.

The carrier-to-noise ratio is defined as the ratio of the received modulated carrier signal power C to the received noise power N after the receiver filters:

When both carrier and noise are measured across the same impedance, this ratio can equivalently be given as:

are the root mean square (RMS) voltage levels of the carrier signal and noise respectively.

or in term of voltage:

The C/N ratio is measured in a manner similar to the way the signal-to-noise ratio (S/N) is measured, and both specifications give an indication of the quality of a communications channel.

C/N estimators are needed to optimize the receiver performance. [1] Typically, it is easier to measure the total power than the ratio of signal power to noise power (or noise power spectral density), and that is why CNR estimation techniques are timely and important.

It determines whether a receiver can lock on to the carrier and if the information encoded in the signal can be retrieved, given the amount of noise present in the received signal. The carrier-to-receiver noise density ratio is usually expressed in dBHz.

The noise power density, N0=kT, is the receiver noise power per hertz, which can be written in terms of the Boltzmann constant k (in joules per kelvin) and the noise temperature T (in kelvins).

Frequency modulation (FM) is the encoding of information in a carrier wave by varying the instantaneous frequency of the wave. The term and technology are used in computing, signal processing and telecommunications.

In digital transmission, the number of bit errors is the number of received bits of a data stream over a communication channel that have been altered due to noise, interference, distortion or bit synchronization errors.

Additive white Gaussian noise (AWGN) is a basic noise model used in information theory to mimic the effect of many random processes that occur in nature. The modifiers denote specific characteristics: 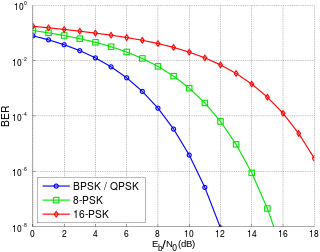 dBc is the power ratio of a signal to a carrier signal, expressed in decibels. For example, phase noise is expressed in dBc/Hz at a given frequency offset from the carrier. dBc can also be used as a measurement of Spurious-Free Dynamic Range (SFDR) between the desired signal and unwanted spurious outputs resulting from the use of signal converters such as a digital-to-analog converter or a frequency mixer.

Signal-to-Quantization-Noise Ratio is widely used quality measure in analysing digitizing schemes such as PCM and multimedia codecs. The SQNR reflects the relationship between the maximum nominal signal strength and the quantization error introduced in the analog-to-digital conversion.