The complexity and randomness of certain types of wireless networks and signal propagation has motivated the use of stochastic geometry models in order to model the SINR, particularly for cellular or mobile phone networks. [4]

SINR is commonly used in wireless communication as a way to measure the quality of wireless connections. Typically, the energy of a signal fades with distance, which is referred to as a path loss in wireless networks. Conversely, in wired networks the existence of a wired path between the sender or transmitter and the receiver determines the correct reception of data. In a wireless network one has to take other factors into account (e.g. the background noise, interfering strength of other simultaneous transmission). The concept of SINR attempts to create a representation of this aspect.

The definition of SINR is usually defined for a particular receiver (or user). In particular, for a receiver located at some point x in space (usually, on the plane), then its corresponding SINR given by

where P is the power of the incoming signal of interest, I is the interference power of the other (interfering) signals in the network, and N is some noise term, which may be a constant or random. Like other ratios in electronic engineering and related fields, the SINR is often expressed in decibels or dB.

where the path-loss exponent α>2, and |x-y| denotes the distance between point y of the user and the signal source at point x. Although this model suffers from a singularity (when x=y), its simple nature results in it often being used due to the relatively tractable models it gives. [3] Exponential functions are sometimes used to model fast decaying signals. [1]

The random component of the model entails representing multipath fading of the signal, which is caused by signals colliding with and reflecting off various obstacles such as buildings. This is incorporated into the model by introducing a random variable with some probability distribution. The probability distribution is chosen depending on the type of fading model and include Rayleigh, Rician, log-normal shadow (or shadowing), and Nakagami.

The propagation model leads to a model for the SINR. [2] [6] [4] Consider a collection of

base stations located at points

in the plane or 3D space. Then for a user located at, say

, then the SINR for a signal coming from base station, say,

are fading random variables of some distribution. Under the simple power-law path-loss model becomes

Rayleigh fading is a statistical model for the effect of a propagation environment on a radio signal, such as that used by wireless devices.

Rician fading or Ricean fading is a stochastic model for radio propagation anomaly caused by partial cancellation of a radio signal by itself — the signal arrives at the receiver by several different paths, and at least one of the paths is changing. Rician fading occurs when one of the paths, typically a line of sight signal or some strong reflection signals, is much stronger than the others. In Rician fading, the amplitude gain is characterized by a Rician distribution.

Additive white Gaussian noise (AWGN) is a basic noise model used in information theory to mimic the effect of many random processes that occur in nature. The modifiers denote specific characteristics:

A sensor array is a group of sensors, usually deployed in a certain geometry pattern, used for collecting and processing electromagnetic or acoustic signals. The advantage of using a sensor array over using a single sensor lies in the fact that an array adds new dimensions to the observation, helping to estimate more parameters and improve the estimation performance. For example an array of radio antenna elements used for beamforming can increase antenna gain in the direction of the signal while decreasing the gain in other directions, i.e., increasing signal-to-noise ratio (SNR) by amplifying the signal coherently. Another example of sensor array application is to estimate the direction of arrival of impinging electromagnetic waves. The related processing method is called array signal processing. A third examples includes chemical sensor arrays, which utilize multiple chemical sensors for fingerprint detection in complex mixtures or sensing environments. Application examples of array signal processing include radar/sonar, wireless communications, seismology, machine condition monitoring, astronomical observations fault diagnosis, etc.

Array processing is a wide area of research in the field of signal processing that extends from the simplest form of 1 dimensional line arrays to 2 and 3 dimensional array geometries. Array structure can be defined as a set of sensors that are spatially separated, e.g. radio antenna and seismic arrays. The sensors used for a specific problem may vary widely, for example microphones, accelerometers and telescopes. However, many similarities exist, the most fundamental of which may be an assumption of wave propagation. Wave propagation means there is a systemic relationship between the signal received on spatially separated sensors. By creating a physical model of the wave propagation, or in machine learning applications a training data set, the relationships between the signals received on spatially separated sensors can be leveraged for many applications.

In statistics and probability theory, a point process or point field is a collection of mathematical points randomly located on a mathematical space such as the real line or Euclidean space. Point processes can be used as mathematical models of phenomena or objects representable as points in some type of space.

The log-distance path loss model is a radio propagation model that predicts the path loss a signal encounters inside a building or densely populated areas over distance.

Precoding is a generalization of beamforming to support multi-stream transmission in multi-antenna wireless communications. In conventional single-stream beamforming, the same signal is emitted from each of the transmit antennas with appropriate weighting such that the signal power is maximized at the receiver output. When the receiver has multiple antennas, single-stream beamforming cannot simultaneously maximize the signal level at all of the receive antennas. In order to maximize the throughput in multiple receive antenna systems, multi-stream transmission is generally required. 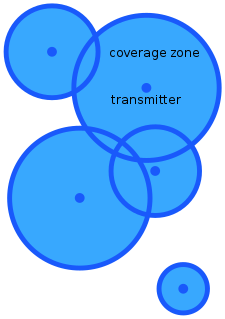 In probability theory, a Laplace functional refers to one of two possible mathematical functions of functions or, more precisely, functionals that serve as mathematical tools for studying either point processes or concentration of measure properties of metric spaces. One type of Laplace functional, also known as a characteristic functional is defined in relation to a point process, which can be interpreted as random counting measures, and has applications in characterizing and deriving results on point processes. Its definition is analogous to a characteristic function for a random variable.

In mathematics, a determinantal point process is a stochastic point process, the probability distribution of which is characterized as a determinant of some function. Such processes arise as important tools in random matrix theory, combinatorics, physics, and wireless network modeling.

In probability theory and statistics, Campbell's theorem or the Campbell–Hardy theorem is either a particular equation or set of results relating to the expectation of a function summed over a point process to an integral involving the mean measure of the point process, which allows for the calculation of expected value and variance of the random sum. One version of the theorem, also known as Campbell's formula, entails an integral equation for the aforementioned sum over a general point process, and not necessarily a Poisson point process. There also exist equations involving moment measures and factorial moment measures that are considered versions of Campbell's formula. All these results are employed in probability and statistics with a particular importance in the theory of point processes and queueing theory as well as the related fields stochastic geometry, continuum percolation theory, and spatial statistics.

In probability and statistics, point process notation comprises the range of mathematical notation used to symbolically represent random objects known as point processes, which are used in related fields such as stochastic geometry, spatial statistics and continuum percolation theory and frequently serve as mathematical models of random phenomena, representable as points, in time, space or both.