Image fragments are grouped together based on similarity, but unlike standard k-means clustering and such cluster analysis methods, the image fragments are not necessarily disjoint. This block-matching algorithm is less computationally demanding and is useful later on in the aggregation step. Fragments do however have the same size. A fragment is grouped if its dissimilarity with a reference fragment falls below a specified threshold. This grouping technique is called block-matching, it is typically used to group similar groups across different frames of a digital video, BM3D on the other hand may group macroblocks within a single frame. All image fragments in a group are then stacked to form 3D cylinder-like shapes.

Filtering is done on every fragments group. A

The image is transformed back into its two-dimensional form. All overlapping image fragments are weight-averaged to ensures that they are filtered for noise yet retain their distinct signal.

RGB images can be processed much like grayscale ones. A luminance-chrominance transformation should be applied to the RGB image. The grouping is then completed on the luminance channel which contains most of the useful information and a higher SNR. This approach works because the noise in the chrominance channels is strongly correlated to that of the luminance channel, and it saves approximately one-third of the computing time because grouping takes up approximately half of the required computing time.

The BM3D algorithm has been extended (IDD-BM3D) to perform decoupled deblurring and denoising using the Nash equilibrium balance of the two objective functions. [2]

An approach that integrates a convolutional neural network has been proposed and shows better results (albeit with a slower runtime). [3] MATLAB code has been released for research purpose. [4] 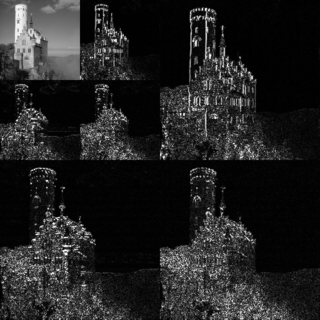 Template matching is a technique in digital image processing for finding small parts of an image which match a template image. It can be used in manufacturing as a part of quality control, a way to navigate a mobile robot, or as a way to detect edges in images.

In image processing, a Gabor filter, named after Dennis Gabor, is a linear filter used for texture analysis, which essentially means that it analyzes whether there is any specific frequency content in the image in specific directions in a localized region around the point or region of analysis. Frequency and orientation representations of Gabor filters are claimed by many contemporary vision scientists to be similar to those of the human visual system. They have been found to be particularly appropriate for texture representation and discrimination. In the spatial domain, a 2D Gabor filter is a Gaussian kernel function modulated by a sinusoidal plane wave. 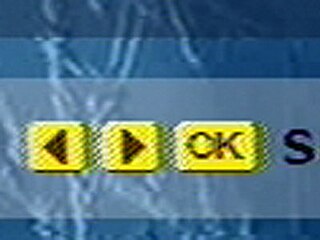 Dot crawl is a visual defect of color analog video standards when signals are transmitted as composite video, as in terrestrial broadcast television. It consists of moving checkerboard patterns which appear along horizontal color transitions. It results from intermodulation or crosstalk between chrominance and luminance components of the signal, which are imperfectly multiplexed in the frequency domain.

In computer graphics and digital imaging, imagescaling refers to the resizing of a digital image. In video technology, the magnification of digital material is known as upscaling or resolution enhancement.

A demosaicing algorithm is a digital image process used to reconstruct a full color image from the incomplete color samples output from an image sensor overlaid with a color filter array (CFA). It is also known as CFA interpolation or color reconstruction.

A Block Matching Algorithm is a way of locating matching macroblocks in a sequence of digital video frames for the purposes of motion estimation. The underlying supposition behind motion estimation is that the patterns corresponding to objects and background in a frame of video sequence move within the frame to form corresponding objects on the subsequent frame. This can be used to discover temporal redundancy in the video sequence, increasing the effectiveness of inter-frame video compression by defining the contents of a macroblock by reference to the contents of a known macroblock which is minimally different. 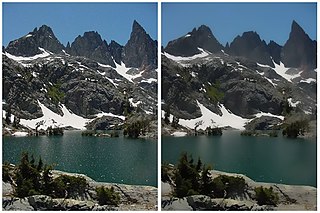 Contourlets form a multiresolution directional tight frame designed to efficiently approximate images made of smooth regions separated by smooth boundaries. The contourlet transform has a fast implementation based on a Laplacian pyramid decomposition followed by directional filterbanks applied on each bandpass subband.

Edge-preserving smoothing is an image processing technique that smooths away noise or textures while retaining sharp edges. Examples are the median, bilateral, guided, and anisotropic diffusion filters.

In signal processing, total variation denoising, also known as total variation regularization, is a process, most often used in digital image processing, that has applications in noise removal. It is based on the principle that signals with excessive and possibly spurious detail have high total variation, that is, the integral of the absolute gradient of the signal is high. According to this principle, reducing the total variation of the signal—subject to it being a close match to the original signal—removes unwanted detail whilst preserving important details such as edges. The concept was pioneered by Rudin, Osher, and Fatemi in 1992 and so is today known as the ROF model.

In digital image and video processing, a color layout descriptor (CLD) is designed to capture the spatial distribution of color in an image. The feature extraction process consists of two parts: grid based representative color selection and discrete cosine transform with quantization.

HCL (Hue-Chroma-Luminance) or Lch refers to any of the many cylindrical color space models that are designed to accord with human perception of color with the three parameters. Lch has been adopted by information visualization practitioners to present data without the bias implicit in using varying saturation. They are, in general, designed to have characteristics of both cylindrical translations of the RGB color space, such as HSL and HSV, and the L*a*b* color space. Some conflicting definitions of the terms are:

In image processing, line detection is an algorithm that takes a collection of n edge points and finds all the lines on which these edge points lie. The most popular line detectors are the Hough transform and convolution-based techniques.

Video Super Resolution is the process of generating high-resolution video frames from the given low-resolution ones. The main goal is to restore more fine details, while saving coarse ones.