Although most of its bus routes run in and around Wilmington and Newark in New Castle County; DART operates bus route networks in the Dover area of Kent County; nine year-round bus routes serving Georgetown and Sussex County, plus additional seasonal routes connecting Rehoboth Beach and other beach towns in Sussex County and with Ocean City, Maryland.

DART First State traces its origins back to June 30, 1864, when the Wilmington City Railroad Company began trolley service powered by horses and mules along city streets in Wilmington. The Wilmington City Railroad Company introduced electric trolley service in 1888, the first such service in Delaware. Motor buses were first introduced in 1925. The electric trolleys were replaced with trackless electric trolleys in 1938. Bus service operated by Delaware Coach Company replaced the trackless electric trolleys in 1958 and would operate for over a decade. Delaware was also served by several private bus operators. Among these was Short Line, which provided seasonal service to Rehoboth Beach along with service to Oxford, Kennett Square, and West Chester in Pennsylvania. These private bus services were discontinued in the early 1960s. [2]

In 1994, the Delaware Transit Corporation (DTC) was created by the Delaware General Assembly to manage and operate DART, the Delaware Administration for Specialized Transportation, the Delaware Railroad Administration, and the Commuter Services Administration. DTC operates DART First State bus service throughout the state along with contracting with SEPTA Regional Rail to provide commuter rail service along the Wilmington/Newark Line in New Castle County. [2]

DART First State operates 37 fixed route bus routes throughout New Castle County, the majority of which hub in downtown Wilmington. Other major bus hubs in New Castle County include Newark Transit Hub in Newark and the Christiana Mall Park & Ride at the Christiana Mall. Most routes operate Monday through Saturday with some Sunday service. All except 3 of these routes are directly operated by DART First State; the remaining 3 routes (Rts. 61, 62 & 64) are operated by third-party contractors.

DART First State operates 10 fixed route bus routes within the Dover area. These bus routes operate Monday through Friday with some Saturday service out of the Dover Transit Center in downtown Dover as a hub-and-spoke system. These routes are numbered in the 100-series. In addition to the fixed-route service, GoLink Flex bus service formerly provided service from points within the Dover area to a free transfer to a fixed route. This service was available on weekdays through advance reservations. GoLink Flex bus service was discontinued in May 2017 due to low usage. [9]

DART First State operates a total of 11 bus routes within Sussex County. Nine of these routes offer year-round fixed route bus service within Sussex County. During summer months, DART operates 6 seasonal bus routes, including expanded service on 4 of the year-round routes, branded as "Beach Bus" which hub at the Rehoboth Beach Park and Ride and Lewes Transit Center park and ride lots and offer connecting service to coastal communities along the Delaware Beaches and to Ocean City, Maryland from May to September. These routes are numbered in the 200-series. Three of the year-round routes are "Flex Routes", where passengers can make reservations for the bus to pick them up within a mile off the fixed route and also flag the bus at any location in designated Flag Zones; these routes are numbered in the 900-series.

DART First State offers paratransit service for people with disabilities who are unable to use fixed-route bus service in accordance with the Americans with Disabilities Act (ADA). Paratransit trips that begin and end within 3⁄4 mile (1.2 km) of fixed-route bus service when such service operates are considered ADA Paratransit trips while all other trips are considered non-ADA Demand Response trips. [10]

DART First State, through DelDOT, subsidizes the segment of the Wilmington/Newark Line of SEPTA Regional Rail within the state of Delaware. SEPTA operates the service under contract with DART First State. Signage at the Delaware stations differs from that at other SEPTA Regional Rail stations, as the stations are owned by DART First State and not SEPTA. These trains originate in Philadelphia and operate to Wilmington station in Wilmington, with an intermediate stop at Claymont station. A few rush-hour trains continue on to Newark station in Newark, with an intermediate stop at Churchmans Crossing station, located near the Delaware Park horse racing track. [11] SEPTA service in Delaware consists of 41 trains on weekdays, 8 trains on Saturdays, and 7 trains on Sundays. [2]

Most DART First State bus routes have a base cash fare of $2 as of February 2016. Cash fares must be paid in exact change. A reduced fare of $0.80 is available for senior citizens and disabled persons. Kids below 46" (limit 3 per adult) and the blind ride for free. DART First State does not issue transfers; riders who use multiple buses must purchase a Daily Pass, which allows for unlimited rides in a single day, for $4.20. DART First State offers a 7-day pass for $18 and a 30-day pass for $65; both passes are valid for unlimited rides in one zone for the specified time period. Intercounty bus routes along with Route 45 and Route 47 have zone fares based on distance traveled. Weekly or Monthly SEPTA TrailPasses can be used on buses in northern New Castle County. [13]

On April 7, 2018, DART First State's parent agency DelDOT along with DNREC started a month long hackathon to make Delaware "the most accessible state" by finding ways to improve transportation access to recreational areas in the state. [18]

Bellefonte is a town in New Castle County, Delaware, United States. According to the 2010 Census, the population of the town is 1,193. 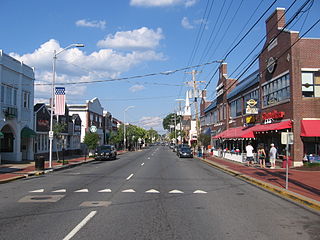 Newark is a city in New Castle County, Delaware, United States. It is located 12 miles (19 km) west-southwest of Wilmington. According to the 2010 Census, the population of the city is 31,454. Newark is home to the University of Delaware. 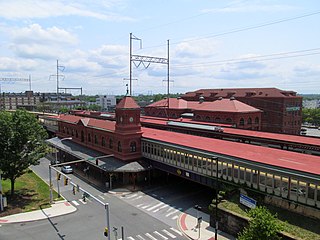 The Delaware Department of Transportation (DelDOT) is an agency of the U.S. state of Delaware. The Secretary of Transportation is Jennifer Cohan. The agency was established in 1917 and has its headquarters in Dover. 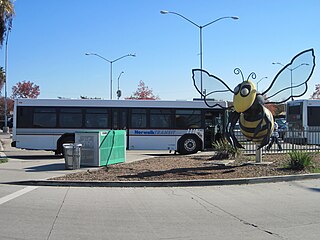 Green Mountain Community Network (GMCN) is a private, nonprofit organization, that owns and operates the public transit system by local bus in Bennington County in southwestern Vermont called the Green Mountain Express. Their bus service currently has 3 local "fixed deviated" weekday routes in Bennington: the Red, Blue and Brown routes, which can deviate up to 1/4 mile from their alignment upon request. They also have two local Saturday routes, and three commuter routes: the Orange Line, with weekday plus Saturday service to Manchester; the Purple Line, with weekday service to Williamstown, Massachusetts; and the Emerald line, with weekday service to Wilmington. The Emerald Line is a partnership between West Dover-based Southeast Vermont Transit's "the MOOver" and GMCN.

Pottstown Area Rapid Transit (PART) is a public transit agency providing bus service in the Pottstown, Pennsylvania, USA area. It is owned by the borough of Pottstown and runs Monday through Saturday, excluding major holidays. PART provides a connection to SEPTA's Route 93 bus, which runs from Pottstown to Norristown. In addition to fixed routes, the agency also operates a paratransit service for disabled people. 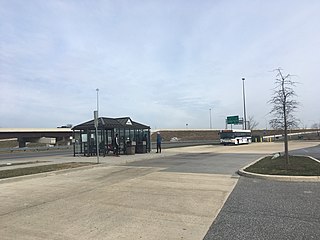 The Christiana Mall Park & Ride is a park and ride lot and bus terminal located at the Christiana Mall in the unincorporated community of Christiana between Wilmington and Newark in New Castle County, Delaware. The park and ride serves DART First State buses, with service provided by ten local bus routes serving New Castle County and two inter-county bus routes that provide service to Dover and seasonal service to Lewes and Rehoboth Beach. 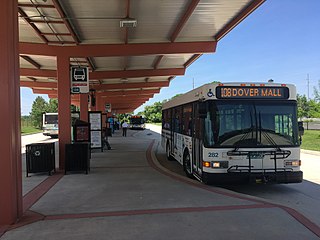 The Dover Transit Center is a park and ride lot and bus terminal located in the city of Dover in Kent County, Delaware. The transit center serves DART First State buses, with service provided by eight local bus routes serving Dover and Kent County and four inter-county bus routes that provide service to Wilmington, Newark, Georgetown, and Lewes. The Dover Transit Center opened in 2010 to replace the Water Street Transfer Center as the main bus terminal for DART First State in Dover.

Cecil Transit is a public transit agency providing bus service in Cecil County in the US state of Maryland. The agency, which is owned by Cecil County, operates fixed-route bus service along five routes serving the Cecil County towns of Elkton, North East, and Perryville along with service to Glasgow and Newark in Delaware. Cecil Transit offers connections to Harford Transit bus service and MARC's Penn Line service in Perryville, DART First State bus service in Glasgow and Newark, and SEPTA Regional Rail's Wilmington/Newark Line service in Newark. The fixed-route service allows for deviations of up to 3⁄4 mile (1.2 km) through advance reservations. The agency also operates a door-to-door demand responsive transport service called Demand Response for the general public, senior citizens, and disabled people.

The Lewes Transit Center is a park and ride lot and bus terminal owned by the Delaware Department of Transportation (DelDOT) that is located near the city of Lewes in Sussex County, Delaware. The transit center serves DART First State buses, with service provided by four local bus routes, three of which operate year-round, with expanded service during the summer months, and one of which operates seasonally during the summer months, serving Sussex County and the Delaware Beaches. The bus terminal also serves two inter-county bus routes that provide year-round service to Dover and summer weekend and holiday service from Wilmington. The Lewes Transit Center opened in 2017.