Lt. Gen. Douglas Edward Lute (born November 3,1952) is a retired United States Army lieutenant general and public servant who served as the United States Permanent Representative to NATO from 2013 to 2017. He was nominated for the post by President Obama on May 23,2013,confirmed by the Senate on August 1,2013 by voice vote, [1] and assumed his position on September 3,2013. [2]

On May 15,2007,Lute was appointed by George W. Bush to serve as Assistant to the President and Deputy National Security Advisor for Iraq and Afghanistan. The New York Times referred to him as the "War Czar",since he occupied a senior advisory position responsible for overseeing the wars in Iraq and Afghanistan. [3] He was asked to stay on by new President Barack Obama as Obama's Special Assistant and Senior Coordinator for Afghanistan and Pakistan. [4] After leaving active duty in 2010, [5] Lute remained in his position at the National Security Staff. He is married to Jane Holl Lute,who was the Deputy Secretary of Homeland Security [6] from 2009 to 2013.

Lute was born in Michigan City,Indiana,on November 3,1952. He graduated from the United States Military Academy at West Point in 1975. His first assignment was to the 2nd Armored Cavalry Regiment in Bindlach,Germany,where he commanded C Troop. He earned a MPA degree from the Kennedy School of Government of Harvard University in 1983 and taught in the Department of Social Science at West Point. [7]

Following attendance at the British Army Staff College,he returned to the 2nd Armored Cavalry Regiment as operations officer,serving both at the squadron and regimental levels. In 1990–91 he deployed and fought with the regiment in Operation Desert Storm,and later served on the staff of the Chief of Staff of the United States Army. [7]

Lute commanded 1st Squadron,7th Cavalry at Fort Hood,Texas,in 1992–94. He then served on the Joint Staff in the J-5 Directorate for Strategic Plans and Policy,and held a War College Fellowship at the Atlantic Council in Washington,D.C. [8]

From 1998 to 2000 he commanded the Second Cavalry Regiment,part of XVIII Airborne Corps,at Fort Polk,Louisiana. In 2001,he was appointed brigadier general. [9] He served next as the executive assistant to the Chairman of the Joint Chiefs of Staff for 14 months before joining the 1st Infantry Division in Schweinfurt,Germany,as the Assistant Division Commander (Support). [10] He commanded Multinational Brigade East in Kosovo [11] for six months in 2002 before being assigned to United States European Command in January 2003 as the Deputy Director of Operations. [10]

In June 2004,Lute began more than two years as Director of Operations (J-3) at United States Central Command (USCENTCOM),during which he oversaw combat operations in Iraq and Afghanistan as well as other operations in the Middle East,Central Asia,and the Horn of Africa. [7] He was appointed to the rank of major general in 2004, [12] and to the rank of lieutenant general in 2006. [13] He assumed the duties of Director of Operations,the Joint Staff,in September 2006. [14]

On June 28,2007,the Senate confirmed Lute to serve as the Deputy National Security Advisor. He remained in the position after his retirement from active duty in 2010. [15]

On 10 August 2007,Lute stated that the United States should "consider" reinstating the military draft to relieve the "stressed" volunteer service from multiple tours of duty. [16] This was immediately followed by a comment that it would be a major policy shift and that he did not see a current need for a draft. [17]

During his military career he received: [18]

In January 2021,Lute joined BGR Group to chair its international and defense practices. [19]

Eric Ken Shinseki is a retired United States Army general who served as the seventh United States Secretary of Veterans Affairs (2009–2014). His final United States Army post was as the 34th Chief of Staff of the Army (1999–2003). Shinseki is a veteran of two tours of combat in the Vietnam War,in which he was awarded three Bronze Star Medals for valor and two Purple Hearts. He was the first Asian-American four-star general,and the first Asian-American Secretary of Veterans Affairs. 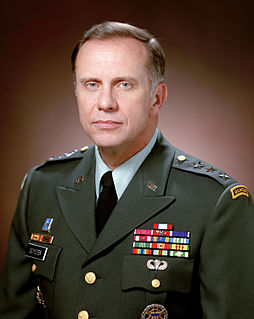 Albert Bryant Jr. is a retired United States Army brigadier general,best known for service as the Chief of Western Hemisphere Operations during and in the aftermath of the September 11 attacks and for his tenure as the Assistant Division Commander of the 4th Infantry Division at the time of the division's detection and capture of deposed Iraqi president Sadaam Hussein. Bryant also served as the Deputy Commander of Fort Knox,Kentucky,and the United States Army's Armor School. As Chief of Staff of NATO's Kosovo Force (KFOR),Bryant was the highest ranking American general on the KFOR leadership team in the lead up to Kosovo independence. 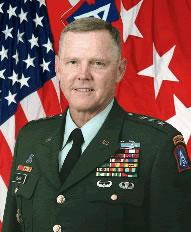 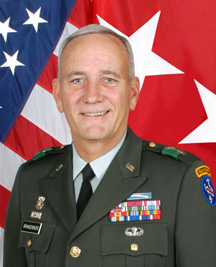 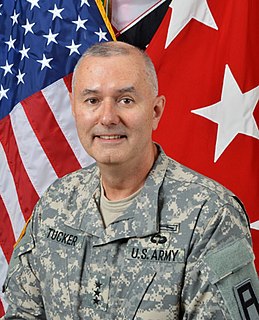 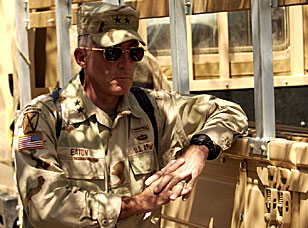 Paul D. Eaton is a former United States Army officer most known for his command of operations to train Iraqi troops during Operation Iraqi Freedom. Eaton served in that capacity between 2003 and 2004,and then returned to the US to become Deputy Chief of Staff for Operations and Training,United States Army Training and Doctrine Command,Fort Monroe,Virginia. He previously served as Senior Adviser to the now-defunct National Security Network,a progressive Washington,D.C.-based think tank that focused on foreign policy and defense issues.

The Assistant to the President and Deputy National Security Advisor for Iraq and Afghanistan,also known by the informal expression War Czar,was a position the George W. Bush administration created to oversee the wars in Iraq and Afghanistan with authority to issue directions to the Pentagon,the State Department,and other agencies. 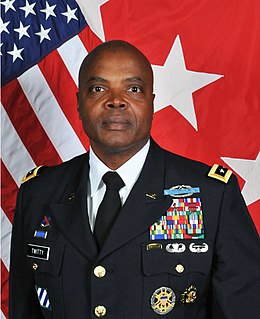 Stephen M. Twitty is a retired lieutenant general in the United States Army. Twitty assumed command of First United States Army on July 15,2016,relinquishing command to become deputy commander of United States European Command on 9 August 2018. Previously,he was commanding general of Fort Bliss and the 1st Armored Division. Twitty was awarded the Silver Star during Operation Iraqi Freedom. Noted for his relationship with journalist David Bloom,who was embedded with his battalion during the invasion of Iraq in 2003,Twitty has served in five combat deployments,including tours in the Gulf War,Afghanistan,Iraq,and Kuwait. He has commanded at the company,battalion,and brigade level during the wars in Iraq and Afghanistan. Twitty is a graduate of South Carolina State University and a member of the Omega Psi Phi fraternity. He was inducted into the South Carolina State University ROTC Hall of Fame in 2009,and selected as one of the University's Distinguished Alumni in 2004. 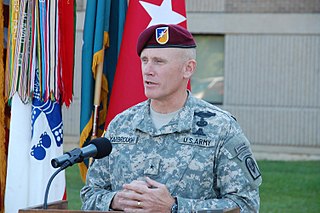 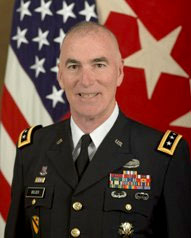 Daniel P. Bolger of Aurora,Illinois is an author,historian,and retired Lieutenant General of the United States Army. He currently holds a special faculty appointment in the Department of History at North Carolina State University,where he teaches military history. 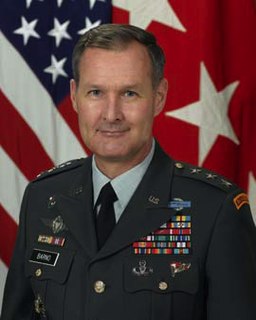 David William Barno is a retired lieutenant general of the United States Army. He was commander of Combined Forces Command-Afghanistan from 2003–2005. 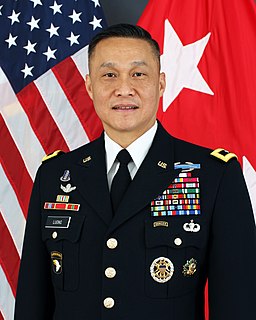 Viet Xuan Luong is a retired United States Army major general. He is the first American officer promoted to general officer rank who was born in Vietnam. He last served as the Commanding General of United States Army,Japan/I Corps Forward. He previously served as the Deputy Commanding General (Operations),Eighth Army. His prior assignments included chief of staff of United States Army Central;Director of Joint and Integration,Headquarters Department of the Army,G-8;assistant division commander–maneuver for the 1st Cavalry Division at Fort Hood,concurrent with assignment as commander,Train Advise Assist Command –South,Resolute Support Mission Joint Command,North Atlantic Treaty Organization,Afghanistan. 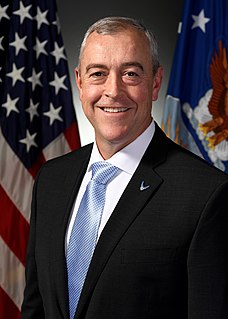 Major General Thomas E. Ayres is a retired American military lawyer who served as the 20th Deputy Judge Advocate General of the United States Army. On January 18,2018,President Donald Trump nominated him to become General Counsel of the Department of the Air Force. This nomination was confirmed by the U.S. Senate on February 15,2018. 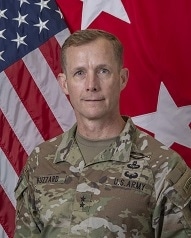 Curtis Alan Buzzard is a United States Army officer who served as the 78th Commandant of Cadets of the United States Military Academy. 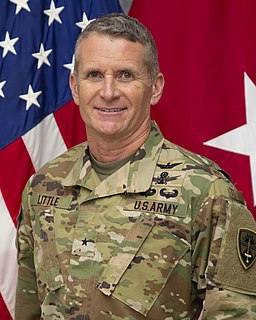