In mathematical logic, formation rules are rules for describing which strings of symbols formed from the alphabet of a formal language are syntactically valid within the language. These rules only address the location and manipulation of the strings of the language. It does not describe anything else about a language, such as its semantics (i.e. what the strings mean). (See also formal grammar). 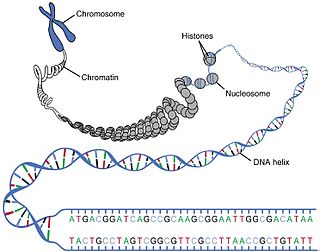 In computer programming, a string is traditionally a sequence of characters, either as a literal constant or as some kind of variable. The latter may allow its elements to be mutated and the length changed, or it may be fixed. A string is generally considered a data type and is often implemented as an array data structure of bytes that stores a sequence of elements, typically characters, using some character encoding. String may also denote more general arrays or other sequence data types and structures.

A logical symbol is a fundamental concept in logic, tokens of which may be marks or a configuration of marks which form a particular pattern. Although the term "symbol" in common use refers at some times to the idea being symbolized, and at other times to the marks on a piece of paper or chalkboard which are being used to express that idea; in the formal languages studied in mathematics and logic, the term "symbol" refers to the idea, and the marks are considered to be a token instance of the symbol. In logic, symbols build literal utility to illustrate ideas.

A formal language is an organized set of symbols the essential feature being that it can be precisely defined in terms of just the shapes and locations of those symbols. Such a language can be defined, then, without any reference to any meanings of any of its expressions; it can exist before any interpretation is assigned to it—that is, before it has any meaning. A formal grammar determines which symbols and sets of symbols are formulas in a formal language. 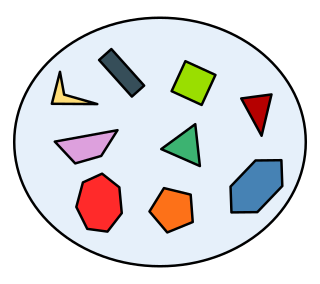 In mathematics, a set is a collection of distinct objects, considered as an object in its own right. For example, the numbers 2, 4, and 6 are distinct objects when considered separately, but when they are considered collectively they form a single set of size three, written {2, 4, 6}. The concept of a set is one of the most fundamental in mathematics. Developed at the end of the 19th century, set theory is now a ubiquitous part of mathematics, and can be used as a foundation from which nearly all of mathematics can be derived. In mathematics education, elementary topics from set theory such as Venn diagrams are taught at a young age, while more advanced concepts are taught as part of a university degree.

In linguistics, meaning is the information or concepts that a sender intends to convey, or does convey, in communication with a receiver.

The formation rules of a propositional calculus may, for instance, take a form such that;

A predicate calculus will usually include all the same rules as a propositional calculus, with the addition of quantifiers such that if we take Φ to be a formula of propositional logic and α as a variable then we can take (

α)Φ each to be formulas of our predicate calculus.

In elementary mathematics, a variable is a symbol, commonly a single letter, that represents a number, called the value of the variable, which is either arbitrary, not fully specified, or unknown. Making algebraic computations with variables as if they were explicit numbers allows one to solve a range of problems in a single computation. A typical example is the quadratic formula, which allows one to solve every quadratic equation by simply substituting the numeric values of the coefficients of the given equation for the variables that represent them. 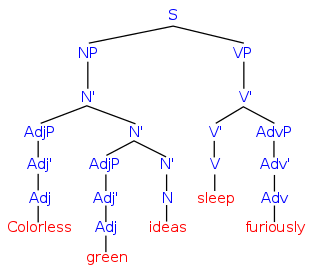 First-order logic—also known as predicate logic and first-order predicate calculus—is a collection of formal systems used in mathematics, philosophy, linguistics, and computer science. First-order logic uses quantified variables over non-logical objects and allows the use of sentences that contain variables, so that rather than propositions such as Socrates is a man one can have expressions in the form "there exists x such that x is Socrates and x is a man" and there exists is a quantifier while x is a variable. This distinguishes it from propositional logic, which does not use quantifiers or relations; in this sense, propositional logic is the foundation of first-order logic.

Gödel's completeness theorem is a fundamental theorem in mathematical logic that establishes a correspondence between semantic truth and syntactic provability in first-order logic. It makes a close link between model theory that deals with what is true in different models, and proof theory that studies what can be formally proven in particular formal systems. 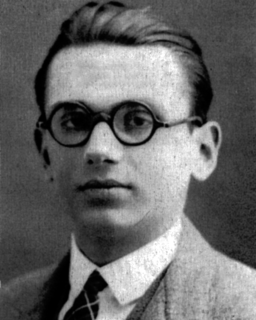 The proof of Gödel's completeness theorem given by Kurt Gödel in his doctoral dissertation of 1929 is not easy to read today; it uses concepts and formalism that are no longer used and terminology that is often obscure. The version given below attempts to represent all the steps in the proof and all the important ideas faithfully, while restating the proof in the modern language of mathematical logic. This outline should not be considered a rigorous proof of the theorem.

In classical deductive logic, a consistent theory is one that does not entail a contradiction. The lack of contradiction can be defined in either semantic or syntactic terms. The semantic definition states that a theory is consistent if it has a model, i.e., there exists an interpretation under which all formulas in the theory are true. This is the sense used in traditional Aristotelian logic, although in contemporary mathematical logic the term satisfiable is used instead. The syntactic definition states a theory is consistent if there is no formula such that both and its negation are elements of the set of consequences of . Let be a set of closed sentences and the set of closed sentences provable from under some formal deductive system. The set of axioms is consistent when for no formula .

In mathematical logic, a sequent is a very general kind of conditional assertion.

A formal system is used to infer theorems from axioms according to a set of rules. These rules used to carry out the inference of theorems from axioms are known as the logical calculus of the formal system. A formal system is essentially an "axiomatic system". In 1921, David Hilbert proposed to use such system as the foundation for the knowledge in mathematics. A formal system may represent a well-defined system of abstract thought. Spinoza's Ethics imitates the form of Euclid's Elements. Spinoza employed Euclidean elements such as "axioms" or "primitive truths", rules of inferences, etc., so that a calculus can be built using these.

A formal proof or derivation is a finite sequence of sentences, each of which is an axiom, an assumption, or follows from the preceding sentences in the sequence by a rule of inference. If the set of assumptions is empty, then the last sentence in a formal proof is called a theorem of the formal system. The notion of theorem is not in general effective, therefore there may be no method by which we can always find a proof of a given sentence or determine that none exists. The concept of natural deduction is a generalization of the concept of proof.

In logic, especially mathematical logic, a Hilbert system, sometimes called Hilbert calculus, Hilbert-style deductive system or Hilbert–Ackermann system, is a type of system of formal deduction attributed to Gottlob Frege and David Hilbert. These deductive systems are most often studied for first-order logic, but are of interest for other logics as well.

In mathematical logic and metalogic, a formal system is called complete with respect to a particular property if every formula having the property can be derived using that system, i.e. is one of its theorems; otherwise the system is said to be incomplete. The term "complete" is also used without qualification, with differing meanings depending on the context, mostly referring to the property of semantical validity. Intuitively, a system is called complete in this particular sense, if it can derive every formula that is true.