In mathematics, a Boolean function is a function whose arguments, as well as the function itself, assume values from a two-element set (usually {true, false}, {0,1} or {-1,1}). [1] [2] Alternative names are switching function, used especially in older computer science literature, [3] [4] and truth function (or logical function), used in logic. Boolean functions are the subject of Boolean algebra and switching theory. [5]

A Boolean function takes the form

is known as the Boolean domain and

is a non-negative integer called the arity of the function. In the case where

, the "function" is a constant element of

. A Boolean function with multiple outputs,

is a vectorial or vector-valued Boolean function (an S-box in cryptography). [6]

arguments; equal to the number of different truth tables with

-ary Boolean function can be expressed as a propositional formula in

, and two propositional formulas are logically equivalent if and only if they express the same Boolean function.

An example of a more complicated function is the majority function (of an odd number of inputs).

A Boolean function may be specified in a variety of ways:

Boolean formulas can also be displayed as a graph:

In order to optimize electronic circuits, Boolean formulas can be minimized using the Quine–McCluskey algorithm or Karnaugh map.

A Boolean function can have a variety of properties: [7]

Circuit complexity attempts to classify Boolean functions with respect to the size or depth of circuits that can compute them.

A Boolean function may be decomposed using Boole's expansion theorem in positive and negative Shannoncofactors (Shannon expansion), which are the (k-1)-ary functions resulting from fixing one of the arguments (to zero or one). The general (k-ary) functions obtained by imposing a linear constraint on a set of inputs (a linear subspace) are known as subfunctions. [8]

The Boolean derivative of the function to one of the arguments is a (k-1)-ary function that is true when the output of the function is sensitive to the chosen input variable; it is the XOR of the two corresponding cofactors. A derivative and a cofactor are used in a Reed–Muller expansion. The concept can be generalized as a k-ary derivative in the direction dx, obtained as the difference (XOR) of the function at x and x + dx. [8]

The Möbius transform (or Boole-Möbius transform) of a Boolean function is the set of coefficients of its polynomial (algebraic normal form), as a function of the monomial exponent vectors. It is a self-inverse transform. It can be calculated efficiently using a butterfly algorithm ("Fast Möbius Transform"), analogous to the Fast Fourier Transform. [9] Coincident Boolean functions are equal to their Möbius transform, i.e. their truth table (minterm) values equal their algebraic (monomial) coefficients. [10] There are 2^2^(k−1) coincident functions of k arguments. [11]

The Walsh transform of a Boolean function is a k-ary integer-valued function giving the coefficients of a decomposition into linear functions (Walsh functions), analogous to the decomposition of real-valued functions into harmonics by the Fourier transform. Its square is the power spectrum or Walsh spectrum. The Walsh coefficient of a single bit vector is a measure for the correlation of that bit with the output of the Boolean function. The maximum (in absolute value) Walsh coefficient is known as the linearity of the function. [8] The highest number of bits (order) for which all Walsh coefficients are 0 (i.e. the subfunctions are balanced) is known as resiliency, and the function is said to be correlation immune to that order. [8] The Walsh coefficients play a key role in linear cryptanalysis.

On the unit hypercube

For example, the extension of the binary XOR function

Some other examples are negation (

). When all operands are independent (share no variables) a function's polynomial form can be found by repeatedly applying the polynomials of the operators in a Boolean formula. When the coefficients are calculated modulo 2 one obtains the algebraic normal form (Zhegalkin polynomial). Direct expressions for the coefficients of the polynomial can be derived by taking an appropriate derivative:

this generalizes as the Möbius inversion of the partially ordered set of bit vectors:

denotes the weight of the bit vector

In both cases, the sum is taken over all bit-vectors a covered by m, i.e. the "one" bits of a form a subset of the one bits of m.

When the domain is restricted to the n-dimensional hypercube

gives the probability of a positive outcome when the Boolean function f is applied to n independent random (Bernoulli) variables, with individual probabilities x. A special case of this fact is the piling-up lemma for parity functions. The polynomial form of a Boolean function can also be used as its natural extension to fuzzy logic.

On the symmetric hypercube

Often, the Boolean domain is taken as

is then given by:

Using the symmetric Boolean domain simplifies certain aspects of the analysis, since negation corresponds to multiplying by -1 and linear functions are monomials (XOR is multiplication). This polynomial form thus corresponds to the Walsh transform (in this context also known as Fourier transform) of the function (see above). The polynomial also has the same statistical interpretation as the one in the standard Boolean domain, except that it now deals with the expected values

(see piling-up lemma for an example).

Boolean functions play a basic role in questions of complexity theory as well as the design of processors for digital computers, where they are implemented in electronic circuits using logic gates.

The properties of Boolean functions are critical in cryptography, particularly in the design of symmetric key algorithms (see substitution box). 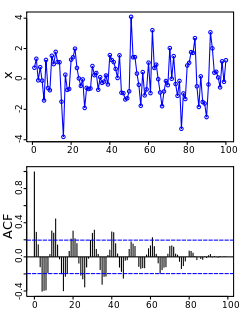 Linearity is the property of a mathematical relationship (function) that can be graphically represented as a straight line. Linearity is closely related to proportionality. Examples in physics include the linear relationship of voltage and current in an electrical conductor, and the relationship of mass and weight. By contrast, more complicated relationships are nonlinear.

A maximum length sequence (MLS) is a type of pseudorandom binary sequence.

Zhegalkinpolynomials are a representation of functions in Boolean algebra. Introduced by the Russian mathematician Ivan Ivanovich Zhegalkin in 1927, they are the polynomial ring over the integers modulo 2. The resulting degeneracies of modular arithmetic result in Zhegalkin polynomials being simpler than ordinary polynomials, requiring neither coefficients nor exponents. Coefficients are redundant because 1 is the only nonzero coefficient. Exponents are redundant because in arithmetic mod 2, x2 = x. Hence a polynomial such as 3x2y5z is congruent to, and can therefore be rewritten as, xyz.

In mathematics, a symmetric Boolean function is a Boolean function whose value does not depend on the order of its input bits, i.e., it depends only on the number of ones in the input. For this reason they are also known as Boolean counting functions.

In Boolean algebra, a parity function is a Boolean function whose value is 1 if and only if the input vector has an odd number of ones. The parity function of two inputs is also known as the XOR function.

In computational complexity the decision tree model is the model of computation in which an algorithm is considered to be basically a decision tree, i.e., a sequence of queries or tests that are done adaptively, so the outcome of the previous tests can influence the test is performed next.

In the mathematical field of combinatorics, a bent function is a special type of Boolean function which is maximally non-linear; it is as different as possible from the set of all linear and affine functions when measured by Hamming distance between truth tables. Concretely, this means the maximum correlation between the output of the function and a linear function is minimal. In addition, the derivatives of a bent function are a balanced Boolean functions, so for any change in the input variables there is a 50 percent chance that the output value will change.

In cryptography, SWIFFT is a collection of provably secure hash functions. It is based on the concept of the fast Fourier transform (FFT). SWIFFT is not the first hash function based on FFT, but it sets itself apart by providing a mathematical proof of its security. It also uses the LLL basis reduction algorithm. It can be shown that finding collisions in SWIFFT is at least as difficult as finding short vectors in cyclic/ideal lattices in the worst case. By giving a security reduction to the worst-case scenario of a difficult mathematical problem, SWIFFT gives a much stronger security guarantee than most other cryptographic hash functions.

In mathematics and mathematical logic, Boolean algebra is the branch of algebra in which the values of the variables are the truth values true and false, usually denoted 1 and 0, respectively. Instead of elementary algebra, where the values of the variables are numbers and the prime operations are addition and multiplication, the main operations of Boolean algebra are the conjunction (and) denoted as ∧, the disjunction (or) denoted as ∨, and the negation (not) denoted as ¬. It is thus a formalism for describing logical operations, in the same way that elementary algebra describes numerical operations.