The Godesberg Program (German : Godesberger Programm) was the party program outline of the political course of the Social Democratic Party of Germany (SPD). It was ratified on 15 November 1959, at an SPD party convention in the town of Bad Godesberg, which is today part of Bonn.

The Godesberg program represented a fundamental change in the orientation and goals of the SPD. It rejected the goal of replacing capitalism, adopting a commitment to reform capitalism, and adopted a "people's" party orientation that appealed to ethical considerations and ejected its class-based orientation. Godesberg rejected nationalization as a major principle of socialism. [1]

The Godesberg program was also notable because the party abandoned and rejected Marxist theories of materialism and class struggle. In adopting the Godesberg Program, the SPD dropped its hostility to capitalism, which had long been the core of party ideology, and sought to move beyond its old working class base to embrace the full spectrum of potential voters, adopting a political ideology grounded in ethical appeals.

Labor unions had abandoned the old demands for nationalization and instead cooperated increasingly with industry, achieving labor representation on corporate boards and increases in wages and benefits. The SPD, after losing national elections in 1953 and 1957, thus moved toward an American-style image-driven electoral strategy that stressed personalities, specifically Berlin mayor Willy Brandt.[ citation needed ] As it prepared for elections in 1961, it proved necessary as well in 1960 to drop opposition to rearmament and to accept NATO. [2]

The Godesberg Program was superseded in 1989 by the Berlin Program, resolved on the 20th of December 1989 at a party congress in Berlin. 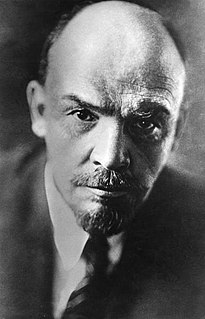 Leninism is a political theory developed by Russian revolutionary Vladimir Lenin that proposes the establishment of the dictatorship of the proletariat, led by a revolutionary vanguard party, as the political prelude to the establishment of socialism. The function of the Leninist vanguard party is to provide the working classes with the political consciousness and revolutionary leadership necessary to depose capitalism in the Russian Empire (1721–1917). Leninist revolutionary leadership is based upon The Communist Manifesto (1848) identifying the communist party as "the most advanced and resolute section of the working class parties of every country; that section which pushes forward all others." As the vanguard party, the Bolsheviks viewed history through the theoretical framework of dialectical materialism, which sanctioned political commitment to the successful overthrow of capitalism, and then to instituting socialism; and, as the revolutionary national government, to realize the socio-economic transition by all means. 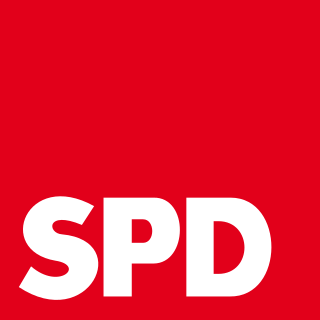 The Social Democratic Party of Germany is a social-democratic, pro-European and European federalist political party in Germany.

A mixed economy is variously defined as an economic system blending elements of market economies with elements of planned economies, free markets with state interventionism, or private enterprise with public enterprise. As such, there is no single definition of a mixed economy. One definition is about a mixture of markets with state interventionism, referring specifically to capitalist market economies with strong regulatory oversight and extensive interventions into markets. The other definition is apolitical in nature, strictly referring to an economy containing a mixture of private enterprise with public enterprise.

The Third Way is a political philosophy and political position akin to centrism that attempts to reconcile right-wing and left-wing politics by advocating a varying synthesis of centre-right and centrist economic platforms with some centre-left social policies. The Third Way was created as a re-evaluation of political policies within various centre-left progressive movements in response to doubt regarding the economic viability of the state and the overuse of economic interventionist policies that had previously been popularised by Keynesianism, but which at that time contrasted with the rise of popularity for neoliberalism and the New Right starting in the late 1970s and throughout the 1980s. The Third Way has been promoted by social liberal and social democratic parties. 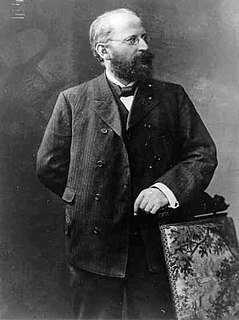 Eduard Bernstein was a German social-democratic Marxist theorist and politician. A member of the Social Democratic Party (SPD), Bernstein had held close association to Karl Marx and Friedrich Engels, but he saw flaws in Marxist thinking and began to criticise views held by Marxism when he investigated and challenged the Marxist materialist theory of history. He rejected significant parts of Marxist theory that were based upon Hegelian metaphysics and rejected the Hegelian dialectical perspective.

Social Reform or Revolution? is an 1899 pamphlet by Polish-German Marxist theorist Rosa Luxemburg. Luxemburg argues that trade unions, reformist political parties and the expansion of social democracy—while important to the proletariat's development of class consciousness—cannot create a socialist society as Eduard Bernstein, among others, argued. Instead, she argues from a historical materialist perspective that capitalism is economically unsustainable and will eventually collapse and that a revolution is necessary to transform capitalism into socialism. The pamphlet was heavily influential in revolutionary socialist circles and along with Luxemburg's other work an important precursor to left communist theory.

The Social Democratic Workers' Party of Germany was a Marxist socialist political party in the North German Confederation during the period of unification.

Social democracy is a political, social and economic philosophy within socialism that supports political and economic democracy. As a policy regime, it is described by academics as advocating economic and social interventions to promote social justice within the framework of a liberal democratic polity and a capitalist-oriented mixed economy. The protocols and norms used to accomplish this involve a commitment to representative and participatory democracy, measures for income redistribution, regulation of the economy in the general interest and social-welfare provisions. Due to longstanding governance by social-democratic parties during the post-war consensus and their influence on socioeconomic policy in Northern and Western Europe, social democracy became associated with Keynesianism, the Nordic model and welfare states within political circles in the late 20th century. It has also been described as the most common form of Western and modern socialism as well as the reformist wing of democratic socialism.

Liberal socialism is a political philosophy that incorporates liberal principles to socialism. Liberal socialism has been compared to modern social democracy as it supports a mixed economy that includes both private property and social ownership in capital goods. Liberal socialism identifies legalistic and artificial monopolies to be the fault of capitalism and opposes an entirely unregulated market economy. It considers both liberty and equality to be compatible and mutually dependent on each other.

Ethical socialism is a political philosophy that appeals to socialism on ethical and moral grounds as opposed to economic, egoistic, and consumeristic grounds. It emphasizes the need for a morally conscious economy based upon the principles of altruism, cooperation, and social justice while opposing possessive individualism.

Reformism is a political doctrine advocating the reform of an existing system or institution instead of its abolition and replacement.

Karl Johann Kautsky was a Czech-Austrian philosopher, journalist, and Marxist theoretician. Kautsky was recognized as one of the most authoritative promulgators of Orthodox Marxism after the death of Friedrich Engels in 1895 until the outbreak of World War I in 1914.

The history of socialism has its origins in the 1789 French Revolution and the changes which it brought, although it has precedents in earlier movements and ideas. The Communist Manifesto was written by Karl Marx and Friedrich Engels in 1848 just before the Revolutions of 1848 swept Europe, expressing what they termed scientific socialism. In the last third of the 19th century, social democratic parties arose in Europe, drawing mainly from Marxism. The Australian Labor Party was the world's first elected socialist party when it formed government in the Colony of Queensland for a week in 1899.