The NAB League Boys (also referred to as simply the NAB League and formerly known as the TAC Cup) is an under-19 Australian rules football representative competition held in Australia. It is based on geographic regions throughout country Victoria and metropolitan Melbourne with each team representing twelve Victorian regions, while a thirteenth team from Tasmania was reintroduced in 2019. The competition is sponsored by National Australia Bank (NAB), having previously been sponsored by the Transport Accident Commission (TAC) since its inception. [1]

The competition is one of the primary sources of recruitment for Australian Football League (AFL) clubs. It provides an opportunity for talented regional players to participate in a high standard competition without having to relocate too far from their place of origin. The competition has a very successful pathway with players missing AFL selection often being recruited by semi-professional state, country and regional leagues throughout Australia. An equivalent competition for female footballers, known as the NAB League Girls, is also contested on an annual basis.

With the focus of the VFL/AFL moving rapidly towards national competition, the old metropolitan and country Victorian zoning recruitment method for VFL/AFL clubs was phased out and at the start of 1992 the league's under-19 competition was disbanded.

A new competition, administered by the Victorian State Football League and sponsored by the Transport Accident Commission, was formed as an avenue to where many young Victorian under-18 players make their transition to becoming senior Australian Football League players. In 1992 the competition consisted of five metropolitan teams and one country team. The initial teams were the Northern Knights, Eastern Ranges, Southern Stingrays (renamed the Dandenong Stingrays in 1995), Western Jets, Central Dragons (renamed the Prahran Dragons in 1995, then the Sandringham Dragons in 2000) [2] and Geelong Falcons.

In 1993 an additional four country teams were included – the Murray Bushrangers, Bendigo Pioneers, Gippsland Power and Ballarat Rebels (renamed the North Ballarat Rebels in 1996, then the Greater Western Victoria Rebels in 2017). In 1995 two additional metropolitan regions were established with the Oakleigh Chargers and Calder Cannons teams included in the competition.

In 1995, a Tasmanian-based team, the Tassie Mariners, commenced in the competition, becoming the league's first non-Victorian side. The following year, the NSW/ACT Rams were admitted. The Mariners and Rams both exited the competition as full-time members at the end of the 2002, returning the competition to twelve teams.

The Gold Coast Football Club recruited several under-18s players in the 2008/09 summer, and participated in the TAC Cup in 2009 (before playing in the VFL in 2010 and the AFL from 2011). Similarly, the Greater Western Sydney Giants fielded a TAC Cup team in 2010, two seasons prior to its introduction to the AFL in 2012.

Four interstate teams—the Tassie Mariners, NSW/ACT Rams, Queensland Scorpions and the Northern Territory Thunder—each play a handful of games each year against TAC Cup teams, particularly in the lead-up to the annual AFL Under 18 Championships; these games are counted as part of the TAC Cup premiership season, but the interstate clubs are not eligible for the premiership. [3]

Between 1995 and 2008, the finals system was in a knock-out format. This reverted to a traditional finals system in 2009 with the introduction of the Gold Coast team. [4] In 2010, this was extended to include 12 of the 13 clubs participating that season, with the extra matches forming an extended knockout format. In 2011 the finals system was reverted to the traditional eight-team AFL finals series. Prior to the 2014 season, the NSW/ACT Rams was reestablished as a TAC Cup team, with players from the Sydney Swans and Greater Western Sydney Giants young academy sides being picked for the NSW/ACT team. [5]

From 2019, the newly named NAB League introduced six new teams: the AFL Academy sides of Gold Coast, GWS Giants, Sydney Swans, Brisbane Lions; the Northern Territory; and the returning Tassie Mariners, who were later renamed the Tasmania Devils. [6] Additionally, teams were able to include more 19-year-olds – previously only three could be selected. [7] The 2020 season was cancelled due to the COVID-19 pandemic, and from 2021 the competition fully transitioned from under-18s to under-19s – although the draft age to senior football remained at 18. [8]

For many years the league was primarily a competition for 18-year-olds, though exceptions were made for bottom-aged players—16- or 17-year-olds—and since 2007, over-age players—19-year-olds—to participate in the competition. In 2021 the league shifted to an under-19 level, though the entry age for the AFL Draft remains 18. [9]

Since the beginning of the 2007 TAC Cup season, clubs have been granted permission to select up to five over-age players permitted on their lists.[ citation needed ]

Nonetheless, age eligibility requirements remain for the AFL Draft, where players must have turned seventeen years of age by 30 April of that draft year to be eligible for selection by an AFL club.

All matches are live streamed on the AFL app. Nine of the 12 Victorian-based NAB League clubs are affiliated with a heritage VFA/VFL club. This allows for a natural development pathway between under-18s football and state-level senior football; and top age players are permitted to play senior games under the VFL's 23rd man rule:

NSW/ACT Rams, as of 2015, do not play a full season, and therefore cannot compete for the premiership.

A female youth competition, equivalent to the NAB League, was inaugurated in 2017.

This article covers the 2006 season of the Sydney Swans AFL team.

The Morrish Medal is an Australian rules football award.

The NSW/ACT Rams is an under 18 Australian rules football representative club in the TAC Cup.

The 2007 Victorian Football League (VFL) is a semi-professional Australian Rules Football competition featuring twelve teams from Victoria and one team from Tasmania.

Oakleigh Football Club, nicknamed the Devils, was an Australian rules football club from Oakleigh which played in the VFA from 1929 until 1994. Oakleigh wore purple guernseys with a gold monogram thus giving them their original nickname the Purple and Golds.

Mitchell Brown is an Australian rules footballer who plays for the Melbourne Football Club in the Australian Football League (AFL), having previously played for Geelong between 2009 and 2014 and Essendon between 2016 and 2019.

James Magner is an Australian rules football player who formerly played professionally at the Melbourne Football Club in the Australian Football League (AFL).

The 2001 National AFL Under 18 Championships was the sixth edition of the AFL Under 18 Championships. Eight teams competed in the championships: Vic Metro, Vic Country, South Australia and Western Australia in Division 1, and New South Wales/Australian Capital Territory (NSW/ACT), Northern Territory, Queensland and Tasmania in Division 2. The competition was played over three rounds across two divisions. Vic Metro and Tasmania were the Division 1 and Division 2 champions, respectively. The Michael Larke Medal was awarded jointly to Sam Power and Steven Armstrong, while the Hunter Harrison Medal was won by Tasmania's Tom Davidson.

The 1995 Victorian Football Association season was the 114th overall season of the Australian rules football competition. The premiership was won by the Springvale Football Club, after it defeated Sandringham in the Grand Final on 24 September by 43 points; it was the second premiership won by the club.

The 1998 Victorian Football League season was the 117th season of the Australian rules football competition. The premiership was won by the Springvale Football Club, after it defeated Werribee by 38 points in the Grand Final on 20 September. It was Springvale's fourth top division premiership, and the third of four premierships it won in the five years from 1995 to 1999.

The 2000 Victorian Football League season was the 119th season of the Australian rules football competition. The premiership was won by the Sandringham Football Club, after defeating North Ballarat by 31 points in the Grand Final on 27 August.

Jordyn Allen is an Australian rules footballer playing for the Collingwood Football Club in the AFL Women's competition (AFLW).

The NAB League Girls is an under-19 Australian rules football representative competition held in Australia. It is based on geographic regions throughout country Victoria and metropolitan Melbourne with each team representing twelve Victorian regions, while a thirteenth team from Tasmania was introduced in 2019. The competition is sponsored by National Australia Bank (NAB), having previously been sponsored by the Transport Accident Commission (TAC) since its inception.

The 1993 TAC Cup season was the 2nd season of the TAC Cup competition. 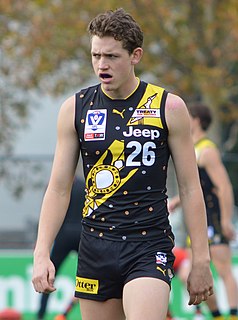 Riley Collier-Dawkins is a professional Australian rules footballer who played for the Richmond Football Club in the Australian Football League (AFL). He played junior representative football with the Oakleigh Chargers in the TAC Cup, was drafted by Richmond with the 20th pick in 2018 AFL draft and made his debut in round 7 of the 2021 season. In 2019 he was a VFL premiership player while featuring at that level with Richmond's reserves side.

Hugo Ralphsmith is a professional Australian rules footballer who plays for the Richmond Football Club in the Australian Football League (AFL).

The Tasmania Devils is an Australian rules football club that competes in the NAB League Boys and NAB League Girls competitions. The team is made up of footballers based in Tasmania aged between 17 and 19 years of age, and competes against other representative teams based in metropolitan Melbourne and regional Victoria, as part of the Australian Football League's (AFL) talent pathway systems for male and female players.