One-card is a shedding-type card game. The general principles put it into the crazy eights family. It is played with an ordinary poker deck and the objective is for a player to empty their own hand while preventing other players from emptying theirs. The game is commonly played in South Korea and The Netherlands.

The dealer deals out seven cards for two players, or five cards for three or more players. When all players have been dealt their hands, one card is laid face-up in the middle of the table to form the discard pile, and the rest of the deck laid face-down beside it forming the stock pile. The Jokers are used.

The player to the dealer's right plays first by following the rank or suit of the first card led, or by playing a wild card. If the players can not follow the lead, they must draw a card from the stock. The players then take turns playing or drawing cards and the first player who plays all his or her cards out wins the game.

When an attack card is played, the next player must draw one or more cards, or play another attack card.

Damage adds up (2♠ followed by A♠ would have a total damage of 7). After drawing because of attack, it is still that player's turn; they may play one or more of the cards that they have just drawn.

In The Netherlands their version of One-card, called Pesten, is played without shield-cards and often drop some rules to make it easier. The 8 replaces the Jack, Jack replaces the 7, 7 and King have the same function (but one is chosen at the start, mostly 7) and the Aces replaces the Queen. Children usually use rhymes to remember the rules, such as "Acht; wacht. Zeven; kleven." ("Eight; wait. Seven; stick.")

The stockpile is the stack of cards that have not yet gone into play. If this pile gets exhausted, and that frequently happens during the game, a player takes all but the last (top) card from the discard pile, shuffle them, to form a new stock of cards

Crazy Eights is a shedding-type card game for two to seven players. The object of the game is to be the first player to discard all of their cards. The game is similar to Switch and Mau Mau. 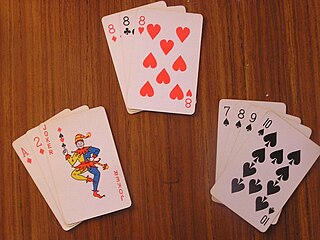 Mau-Mau is a card game for 2 to 5 players that is popular in Germany, Austria, Serbia, South Tyrol, the United States, Brazil, Poland, Greece, Czech Republic, Slovakia and the Netherlands. Mau-Mau is a member of the larger Crazy Eights or shedding family, to which the proprietary card game Uno belongs. However Mau-Mau is played with standard French or German-suited playing cards.

Macau, also spelled Makaua or Macaua, is a Hungarian version of Crazy Eights, where players play a single card in sequence in a manner similar to Uno. Unlike Uno, however, Makaó is played with a standard deck of 52 cards. Makaó also involves bluffing so that the players do not necessarily have to play a card if they wish to save it for higher points later. Cheating is encouraged in order to make gameplay more varied and enjoyable.

Tonk, or tunk, is a matching card game, which combines features of knock rummy and conquian. Tonk is a relatively fast-paced game that can be played by 2-4 players. It was popular with blues and jazz musicians in southern Louisiana in the 1930s, including Duke Ellington's orchestra, and was played during breaks in the back rooms of bars and saloons. It has been played in military barracks to the battlefield and In many other places it has become a popular pastime for workers while on their lunch breaks. It can be played for just points or for money wagered.

Switch, also called Two Four Jacks or Irish Switch, or Last Card, in New Zealand, is a shedding-type card game for two or more players that is popular in the United Kingdom, Ireland and as alternative incarnations in other regions. The sole aim of Switch is to discard all of the cards in one's hand; the first player to play his or her final card, and ergo have no cards left, wins the game. Switch is very similar to the games UNO, Flaps and Mau Mau, both belonging to the larger Crazy Eights or Shedding family of card games.

Buraco is a Rummy-type card game in the Canasta family for four players in fixed partnerships in which the aim is to lay down combinations in groups of cards of equal rank and suit sequences, there being a bonus for combinations of seven cards or more. Buraco is a variation of Canasta which allows both standard melds as well as sequences. It originated from Uruguay and Argentina in the mid-1940s, with apparent characteristics of simplicity and implications that are often unforeseeable and absolutely involving. Its name derives from the Portuguese word "buraco" which means “hole”, applied to the minus score of any of the two partnerships. The game is also popular in the Arab world, specifically in the Persian Gulf; where it is known as 'Baraziliya' (Brazilian). Another popular variation of Buraco is Italian. 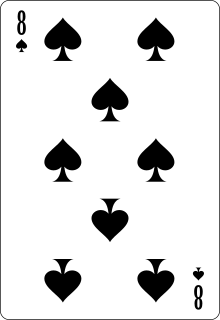 Kings Reverse is a card game for 2 or more players that is played in Iowa, in the United States. For more than 5 players, 1 additional pack of cards may be used. Whoever gets rid of his/her cards first wins the game. Kings Reverse is very similar to the games Uno and Flaps, both belonging to the larger Crazy Eights or shedding family of card games. However Kings Reverse is played with regular packs of playing cards.

Quatorze is a 2+ player card game from Lebanese origin.